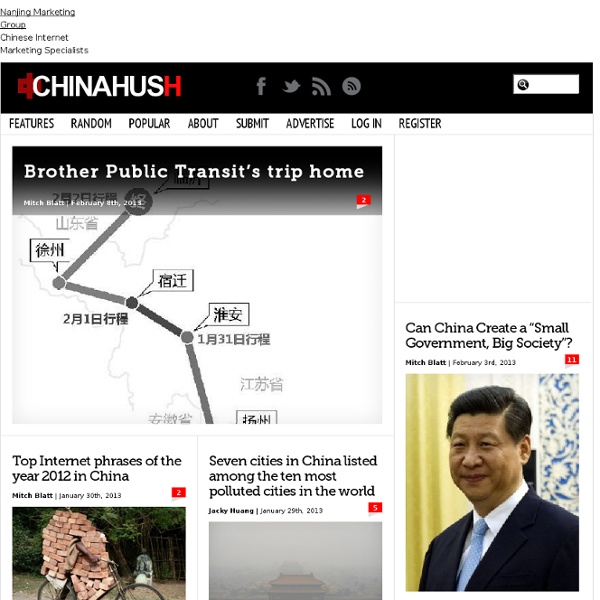 Translated from the Jinling Evening News on March 4: On October 22, 2013, in Tongda International district of Taiyuan city, Shanxi province, a woman was murdered in her home. The police quickly arrested murderer Li Jian. Li Jian explained that a rich woman named Cao Lihua used a fake corporate WeChat account to recruit the killer, and she personally trained him, meticulously planning for years. Cao Lihua instigated it!

Chinalogue on environment "中外对话"是世界上致力于环境问题的第一个完全双语网站。气候变化、物种消亡、污染、水资源匮乏以及环境破坏等问题并不仅仅局限在某一国之内，而是全世界所有居民都要面临的挑战， 而正在崛起的中国给他们带来一个新的紧迫任务。应对上述这些挑战需要全世界达成共识，并且共同努力，而我们"中外对话"网站的目标正是促进这种共识的达成。 "中外对话"致力于发布高质量文章，提供双语信息，促进直接对话，为我们共同面临的环境挑战寻求解决方案。 Creme de la Creme On April 13, 2014, Abdulbasit Ablimit, a 17-year-old from a small town near Aqsu, was shot twice. It appears he had run a red light on an electric scooter and, rather than stop and pay a fine, he had fled. According to his friends, he was gunned down three kilometers later. The official state narrative, posted a few days after the incident, says he attacked the police officers with stones, tried to grab their guns, and so on. Regardless of how, Abdulbasit died within hours. His body was given to his family for burial.

e-collective “From a deep pool of blue ink rises an image…” – this is written on Blueprint‘s Neocha.com homepage, a digital collective that describes itself as a Chinese creative group with no artistic bounds. In an “Internet world” filled with many options for exploring different kinds of creative content, we find ourselves frequently entering Blueprint’s creative world. Their distinctive style comes from the ambient / “lowercase” electronic sound they produce as well as their visual works, which exude a subtle mysticism. The depth and breadth of content under the “Blueprint” name actually comes from members who live in many cities, including Zhengzhou, Beijing, Shanghai, Hangzhou, Chongqing, Guangzhou, Nanjing, among others. It’s important to note here that the new generation of Chinese creatives can’t be neatly divided into the usual first tier city, second tier city, etc. classifications.

China Pilots reveal death-defying ordeal as engines failed on approach to Chek Lap Kok When both of Flight CX780’s engines failed on approach to Chek Lap Kok, tragedy looked certain to its pilots, who hadn’t trained for such an emergency. However, outstanding airmanship led to a safe – if not smooth – landing for the 322 people on board. Now, for the first time, the unsung fliers talk publicly about their death-defying ordeal, Simon Parry reports. Passage from India: following the Stilwell Road Fleming: WoM China Mogujie.com launched a new online product, “ Free Group Purchase ”, at 5 p.m. on the 1st of March, encouraging users to initiate a group purchase on any product they want. This “C2B” group purchase would be achievedas long as they round up enough participants. So far, more than 15,000 group purchases have been started, 100 of which have been successful. Social platform meishixing.com has at last launched a web version. For what is essentially a Pinterest clone, this web version features organizing and sharing features for foodies to share photos of all their favorite eats. You’re also able to search for the hottest content (or shoulf that be filling?)

China's Consumer Market: explained Just finished the book, Chocolate Fortunes: The Battle for the Hearts, Minds, and Wallets of China’s Consumers, by Lawrence L. Allen. It’s a very good book. The book is about the competition between Hershey’s, Mars, Ferraro Rocher, Nestle and Cadbury for the Chinese consumer. But it is really more about what it takes to succeed in the consumer products business in China. And lest anyone ever thought China consumer sales would be easy, Chocolate Fortunes thoroughly dispels that notion, while explaining exactly what it does take to succeed or fail in China. China Philanthropy While no one event rocked China’s social sector in 2013, each change in policy making the NPO registration process less complex and founding of another foundation summed up together equaled great forward movement for the Chinese philanthropic sector. With the start of a new lunar year, the media and many organizations have published their roundups of the most important events from 2013 in China’s social sector. We at SVG have put together a roundup of the roundups to help you recap the events of 2013 and put them into perspective as we head into another year.

Marketing in China 1: Think Local Act Local When more than 300 people attired in red and blue jackets with the words "I Love China" emblazoned over them lined up for the raising of the national flag at the world famous Tian An Men Square in several winter mornings of 1996, one would expect their faces would be all be Chinese. Their whole-hearted explosive singing of the Chinese National Anthem with the raising of the flag each morning made them sound like a squad from the local cadet academy.