The Film UI and Screen Design work of Jayse Hansen 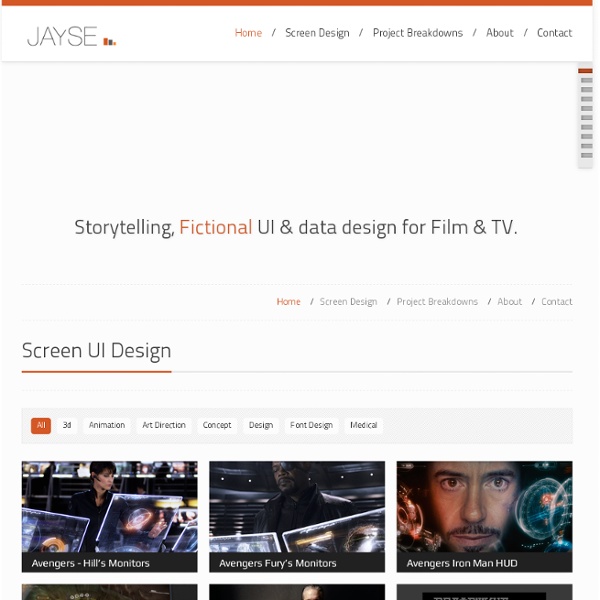 The Portfolio of Brian Talbot, Web & User Experience Designer An Idea for a Digital Keepsake and Momento based on Real-World Activity As part of the Rails Rumble rules/tradition, teams of no more than 4 individuals have 2 days to create an app that leverages social media/3rd party data. With this in mind, the Spotcard team skipped formalities and identified simple use cases to help define an initial scope. We all loved Gowalla, the geo-location game/service, and wanted to leverage its rabid and physically active fan-base as well as its curated visuals to make something its users would value. The act of checking in somewhere signifies a user wants to mark this moment down for posterity and share with friends/family - there's another object that has done the same job in the physical world for decades, the post card.

Woolf + Lapin The Spriters Resource | Main Page jtnimoy: The Work of Josh Nimoy Kyle Thacker - Interaction Designer Motionographer | Digital Filmmaking, Animation, Motion Graphics, Design, Film, Visual Effects and Experimental Moving Image Storytelling 蓝瑟秉秉~2+3D游戏特效基地 - 博客大巴 Best Linux Software You’ve made the switch from Windows or Mac OS X, and now you’re looking for applications to install. Or maybe you’re a long-time Linux user who’s keeping an eye out for what’s new. Either way, you’ve come to the right place. You’ve already picked a Linux distro and have settled on a desktop environment. Most of the software below is free and open source. A few require you to download an installer from a website. Browsers Firefox With the new Quantum update, Mozilla has given people reason to check out Firefox again. 9 Reasons to Switch From Chrome to Firefox 9 Reasons to Switch From Chrome to Firefox The days when Chrome was the best browser are long gone. Chrome/Chromium By some measures, Chrome is now the king of the hill. How to Decide If a Chromebook Is Right For You How to Decide If a Chromebook Is Right For You Is a Chromebook for everyone? Opera Opera isn’t open source, but it is free. Web (Epiphany) Browser There aren’t many browsers developed explicitly for Linux. QupZilla Email Geary