Scientific evidence that you probably don’t have free will 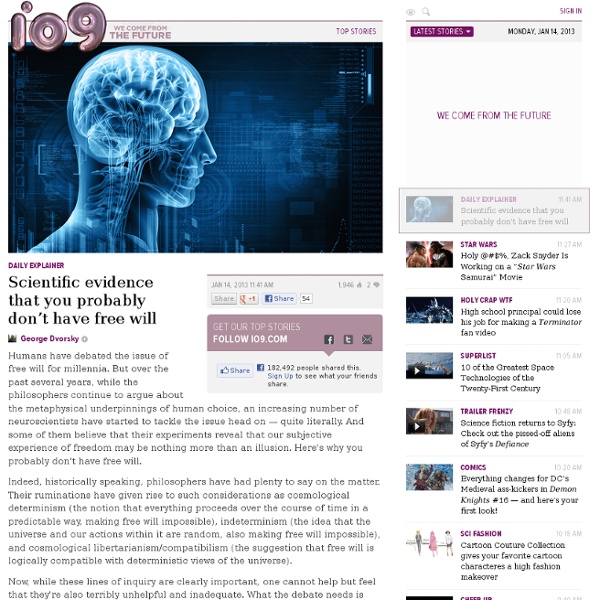 I might note that you're citing experiments, which while not entirely debunked are in many circles considered to be highly flawed. For example, the "when did you decide to move your finger," experiment. This experiment is considered flawed because moving your finger is purely a motor response, and an incredibly simplistic one at that. The motion of our hands is one of the things we have the least control over, we're constantly twitching, scratching itches, or simply stretching our fingers out without realizing it. Simply put, moving your fingers is such a small and inconsequential decision that it largely falls under the unconscious decision category. This however, is entirely different from decisions that by necessity require a great deal of forethought. Actually, I read up on this subject a little about a week ago, and found a fairly decent article on the subject.

Scientists create artificial link between unrelated memories -- ScienceDaily The ability to learn associations between events is critical for survival, but it has not been clear how different pieces of information stored in memory may be linked together by populations of neurons. In a study published April 2nd in Cell Reports, synchronous activation of distinct neuronal ensembles caused mice to artificially associate the memory of a foot shock with the unrelated memory of exploring a safe environment, triggering an increase in fear-related behavior when the mice were re-exposed to the non-threatening environment. The findings suggest that co-activated cell ensembles become wired together to link two distinct memories that were previously stored independently in the brain. "Memory is the basis of all higher brain functions, including consciousness, and it also plays an important role in psychiatric diseases such as post-traumatic stress disorder," says senior study author Kaoru Inokuchi of the University of Toyama.

10 theories that explain why we dream Kinja is in read-only mode. We are working to restore service. I like #7 and #8 of sorts, as they sort of fit in with the kinds of dreams I have. On that note after seeing Inception I loved the comments about how our dreams are basically "filled in" with familiar places/things to make them feel more complete. Flagged

Physicians in China treat addictions by destroying the brain's pleasure center "Many Chinese scientists conduct shoddy and unethical research where 'rewards for publication in international journals are high.'" I'm am so fed up with China & all their stupid antics, it's one thing after another & it's all negative, shortcuts to shortcuts, fast & cheap, screw originality, screw safety, screw the environment, & yet we are to play nice or else. They're like the big crazy person in the mall's food court that's acting out, but no one is willing to say or do anything because they're afraid if what might happen.

Hypnagogic State & Hypnopompic hallucination Hypnagogia Hypnagogia (also spelled hypnogogia) are the experiences a person can go through in the hypnagogic (or hypnogogic) state, the period of falling asleep. Hypnopompia are the experiences a person may go through in the hypnopompic state, the period of waking up. The term “hypnagogic” is derived from the French word hypnagogique, coined by the 19th century French psychologist Louis Ferdinand Alfred Maury from the Greek words hupnos, meaning sleep, and agogos, meaning leading. Hypnagogic sensations Hypnagogic sensations are vivid dream-like experiences that occur as one is falling asleep or waking up. Most common * Vividness * Falling sensation * Fear Common * Sensing a "presence" (often malevolent) * Pressure/weight on body (especially the chest or back). * A sensation of not being able to breathe * Sense of impending doom/death Fairly common * Auditory sensations (often footsteps or indistinct voices, or pulsing noises). Less common * Tactile sensations (such as a hand touching or grabbing)

Lucid Dreaming “It’s the only way to fly.” Lucid dreaming is the experience of being completely aware within a dream that you are, in fact, in a dream. This realization leads to complete power for the dreamer, allowing him/her to go anywhere and do anything in their dream. You might have had this happen to you once or twice in your life, but chances are the dream didn’t last very long. This is because as soon as people get excited from realizing they have achieved lucidity, they tend to wake up. So how does one avoid this problem, or even have more consistently lucid dreams in the first place? 1) Master Dream Re-Call Before you can lucid dream, you have to be able to remember that dreams that you have so that you can improve your technique. Second, figure out your method for recording your dreams when you do remember them. 2) Carry Over Some Consciousness Pick a night when you are so tired that you will fall asleep as soon as you hit the bed…but don’t. 3) Reality Checks 4) Final Tips

What the Science of “Sleep Paralysis” Reveals About How the Brain Works by Maria Popova How a neurological nightmare illuminates the wondrous workings of the brain-body connection. “In both writing and sleeping,” Stephen King wrote in his meditation on “creative sleep” and the art of wakeful dreaming, “we learn to be physically still at the same time we are encouraging our minds to unlock from the humdrum rational thinking of our daytime lives.” But while he was exploring the creative process from a metaphorical angle, he was inadvertently describing one of the greatest neurological nightmares that could befall us. I can’t fall asleep on my back — or rather, I don’t dare to. Illustration by Ralph Steadman from 'Alice in Wonderland.' But Kean, who is usually able to awaken his body within a few minutes, considers himself lucky — for others suffering from sleep paralysis, it can take hours of tortuous toiling. Deep inside the reptile brain sits the pons, a hump in the brainstem an inch long. Zombies illustration from 'Monsters & Legends.' Donating = Loving

The Science of Dreams and Why We Have Nightmares by Maria Popova The psychology of our built-in nocturnal therapy. “The interpretation of dreams is the royal road to a knowledge of the unconscious activities of the mind,” Freud argued in his influential treatise The Interpretation of Dreams in 1900. “The earth is heavy and opaque without dreams,” Anaïs Nin wrote in her diary in 1940. In Dreamland: Adventures in the Strange Science of Sleep (public library) — best science books of 2012, exploring what happens while you sleep and how it affects your every waking moment, which also gave us this fascinating reads on sleep and the teenage brain — David K. Freud’s theories — premised on the idea that the symbolism of dreams encoded the dreamer’s subconscious desires and concerns, often of a sexual nature — were systematically challenged and dismissed over the course of the 20th century, but without much of a viable alternative theory. And yet theories continue to differ. Hartmann sees dreams as a form of built-in nocturnal therapy.

Birth of new brain cells might erase babies’ memories Unlike the proverbial elephants, babies always forget. Infants’ memories may be wiped clean by the genesis of new brain cells, a study in rodents suggests. The findings offer an explanation for why people can’t recall memories from early childhood, a century-old mystery. The study’s authors “make a very interesting and compelling case,” says neuroscientist and psychiatrist Thomas Insel, director of the National Institute for Mental Health in Bethesda, Md. More than 100 years ago, Sigmund Freud speculated that humans’ tendency to forget their early years, dubbed infantile amnesia, might have a psychosexual origin. “But the really weird thing is that most animals show infantile amnesia too,” she says. Inspired by observations of their own toddler, Josselyn and her husband, study coauthor Paul Frankland, wondered why young children couldn’t retain memories of situations or events. Josselyn and Frankland knew that such cell production tapers off in childhood.

Study reveals workings of working memory Keep this in mind: Scientists say they've learned how your brain plucks information out of working memory when you decide to act. Say you're a busy mom trying to wrap up a work call now that you've arrived home. While you converse on your Bluetooth headset, one kid begs for an unspecified snack, another asks where his homework project has gone, and just then an urgent e-mail from your boss buzzes the phone in your purse. When you do that, according to Brown University psychology researchers whose findings appear in the journal Neuron, you'll employ brain circuitry that links a specific chunk of the striatum called the caudate and a chunk of the prefrontal cortex centered on the dorsal anterior premotor cortex. In lab experiments with 22 adult volunteers, the researchers used magnetic resonance imaging to track brain activity during a carefully designed working memory task. Of cognition and wingdings So the cortex interprets the context, while the striatum implements the gating.

Liberalism, atheism, male sexual exclusivity linked to IQ The IQ differences are statistically significant, but experts say the data shouldn't be used to stereotype or make assumptions. Behaviors may stem from desire to show superiority or elitism, which also has to do with IQFor men, sexual exclusivity goes against the grain evolutionarilyNone of this means that humans are evolving toward a future where such traits are the default (CNN) -- Political, religious and sexual behaviors may be reflections of intelligence, a new study finds. Evolutionary psychologist Satoshi Kanazawa at the the London School of Economics and Political Science correlated data on these behaviors with IQ from a large national U.S. sample and found that, on average, people who identified as liberal and atheist had higher IQs. This applied also to sexual exclusivity in men, but not in women. The reasoning is that sexual exclusivity in men, liberalism and atheism all go against what would be expected given humans' evolutionary past.

The Secret To Staying With Someone Forever Is To Keep Falling In Love (And Never Stop) You’re not exactly sure what’s going on. Your heart keeps racing, regardless of whether or not you’re in this person’s presence. Thoughts flood your mind, making it difficult to focus on anything other than the person in front of you. This person is there with you throughout the day, keeping you company in your moments of solitude. You can’t let go of him or her because this person has somehow managed to seep through your pores, fusing and making the distinction between you and this person a little more than shadow. You’re falling in love, and the world finally just started spinning. We’re cursed to forever draw comparisons between new experiences and memories. Just as much as it is advantageous, having the ability to prop two things side by side, compare them and analyze them, is also what damns us to a life riddled with sadness and disappointment. Accepting that the lows in life are necessary for the highs isn’t built into our nature. We are creatures who never want to lose.