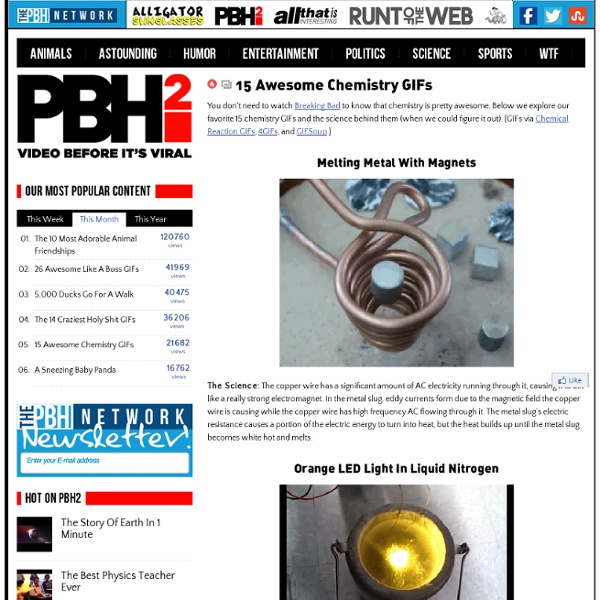 You don’t need to watch Breaking Bad to know that chemistry is pretty awesome. Below, we explore our favorite 15 chemistry GIFs and the science behind them (when we could figure it out): Melting Metal With Magnets The Science: The copper wire has a significant amount of AC electricity running through it, causing it to act like a really strong electromagnet. In the metal slug, eddy currents form due to the magnetic field the copper wire is causing while the copper wire has high frequency AC flowing through it. The metal slug’s electric resistance causes a portion of the electric energy to turn into heat, but the heat builds up until the metal slug becomes white hot and melts. Orange LED Light In Liquid Nitrogen The Science: When an LED is immersed in liquid nitrogen, the electrons lose a lot of thermal energy, even when the light isn’t turned on. Awesome Chemistry GIFs: Heating Mercury Thiocyanate Hydrogen Peroxide Catalyzed By Potassium Iodide

Twelve Free Chemistry Databases Just two years ago, trying to find free online chemistry databases was an exercise in futility. Now, they're sprouting up all over the Web like wildflowers after a wet Spring. What follows is a far-from-complete roundup of some of the more interesting places to start your chemical search. PubChem- The granddaddy of all free chemistry databases. Human Cells have Electric Fields as Powerful as Lighting Bolts -A Galaxy Insight Using newly developed voltage-sensitive nanoparticles, researchers have found that the previously unknown electric fields inside of cells are as strong, or stronger, as those produced in lightning bolts. Previously, it has only been possible to measure electric fields across cell membranes, not within the main bulk of cells, so scientists didn't even know cells had an internal electric field. This discovery is a surprising twist for cell researchers. Scientists don't know what causes these incredibly strong fields or why they' are there. But now using new nanotools, such as voltage-sensitive dyes, they can start to measure them at least. Researchers believe they may be able to learn more about disease states, such as cancer, by studying these minute, but powerful electric fields.

6 Insane Discoveries That Science Can't Explain We like to feel superior to the people who lived centuries ago, what with their shitty mud huts and curing colds by drilling a hole in their skulls. But we have to give them credit: They left behind some artifacts that have left the smartest of modern scientists scratching their heads. For instance, you have the following enigmas that we believe were created for no other purpose than to fuck with future generations. The Voynich Manuscript The Mystery: Reversible flow (when I show this in class, minds are blown) 12Google + 33StumbleUpon Interesting video showing Laminar Flow and demonstrating fluid flowing in layers. Very cool! 15 Must Share Science Gifs We’ve gathered fifteen of the most fascinating and interesting gifs that will surely amaze you and make you a big fan of science. Note: If you’re on a mobile device, you will have to tap a gif to play it. Relighting the candle via its vapor trail. Flammable gas in a glass jug.

15 Ways to Get Past an Awkward Moment Aug 13, 2012 We’ve all been in awkward situations, our lives are full of them. Nobody’s perfect, but how you handle it can turn an awkward moment into a partial win. Below you will see 15 awkward situations and what these people did to try and turn it around. It might not always work but the best you can do is try, and nobody can take that away from you! 100 Very Cool Facts About The Human Body The Brain The human brain is the most complex and least understood part of the human anatomy. There may be a lot we don’t know, but here are a few interesting facts that we’ve got covered. Nerve impulses to and from the brain travel as fast as 170 miles per hour. Ever wonder how you can react so fast to things around you or why that stubbed toe hurts right away? It’s due to the super-speedy movement of nerve impulses from your brain to the rest of your body and vice versa, bringing reactions at the speed of a high powered luxury sports car.The brain operates on the same amount of power as 10-watt light bulb.

Films for families: The top 50 movies to watch as a family From the high-flying Mary Poppins to an animated singing mermaid, Time Out Kids ranks the 50 best films for families. By David Fear Mon Aug 13 2012 The 5,000 Fingers of Dr. T (1953)