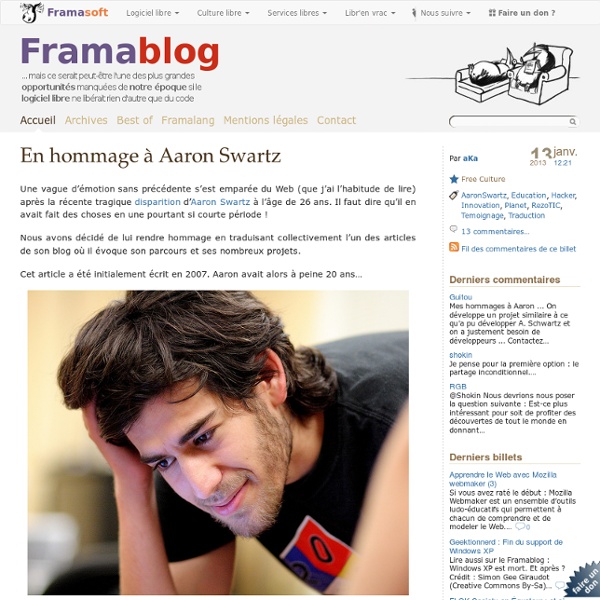 Qui est Nicholas Negroponte ? Nicholas Negroponte (born December 1, 1943) is a Greek American architect. He is the founder and Chairman Emeritus of Massachusetts Institute of Technology's Media Lab, and also founded the One Laptop per Child Association (OLPC). Early life[edit] How To Become A Hacker Copyright © 2001 Eric S. Raymond As editor of the Jargon File and author of a few other well-known documents of similar nature, I often get email requests from enthusiastic network newbies asking (in effect) "how can I learn to be a wizardly hacker?". Back in 1996 I noticed that there didn't seem to be any other FAQs or web documents that addressed this vital question, so I started this one.

Researchers begin posting article PDFs to twitter in #pdftribute to Aaron Swartz « Neuroconscience Yesterday, as I was completing my morning coffee and internet ritual, @le_feufollet broke the sad news to me of Aaron Swartz’s death. Aaron was a leader online, a brilliant coder and developer, and sadly a casualty in the fight for freedom of information. He was essential in the development of two tools I use every day (RSS and Reddit), and though his guerilla attempt to upload all papers on JSTOR was perhaps unstrategic, it was certainly noble enough in cause. Before his death Aaron was facing nearly 35 years in prison for his role in the JSTOR debacle, an insane penalty for attempting to share information. We don’t know why Aaron chose to take his life, but when @la_feufollet and I tried to brainstorm a tribute to him, my first thought was a guerilla PDF uploading campaign in honor of his fight for open access. I’m not much of an organizer, so I posted in one of the many rising reddit threads and hoped for the best:

Michael Brutsch troll sur Reddit Michael Brutsch is a former moderator on the social news site Reddit who contributed under the username violentacrez. Under that account, Brutsch generated controversy due to his contributions to various sections of the site, or subreddits, devoted to explicit material. The r/jailbait subreddit he created was a prominent subreddit on the site before it was closed down in October 2011 following a report by CNN.[1] His ability to identify and remove illegal content from the areas he moderated helped Brutsch develop a close relationship with staff at Reddit despite his controversial activities.

Was Aaron Swartz Killed By An MIT Satanic Child Porn Ring? Let us start by dismissing the prosecution’s ludicrous charge that any programmer as talented as Aaron Swartz would dedicate his life to stealing an archive that dispenses its academic papers for a few dollars apiece to the public or for free to students under department accounts. MIT professors, who are so full of themselves, are the only ones who might take seriously such a fool’s errand as a worthy objective for the brilliant and rebellious Swartz or the law suit as the cause of his so-called “suicidal depression.” The mass media have been fed, and eagerly swallowed, the unpalatable lies hurled against a courageous young man whose guilt lies solely in his disgust at the online filth from “respectable” Internet paragons who have deviously corrupted the morals of his generation. America’s leading center for computer science has unleashed a campaign of slander against Swartz, who cannot defend himself through the media or in the docket now that he is dead. The Culprit is MIT not Swartz

Mitch Altman: The Hacker Lifestyle Mitch Altman at Chaos Communication Camp, Berlin, August 2011 When he was young, Mitch Altman didn’t like himself. Too much of an introverted geek, too ugly, too queer, in every sense of that word. Today, the first thing that strikes you when you meet him in person is the serenity that emanates from the man. These days Mitch is a respected figure in the hacker community.

Academics share copyrighted journal articles on Twitter to honor Aaron Swartz This morning, hundreds of links to copyright-protected journal articles have appeared on Twitter in remembrance of Aaron Swartz, posted by members of the academic community. The call to the protest appears to have started on Reddit, where researcher Micah Allen said, "a fitting tribute to Aaron might be a mass protest uploading of copyright-protected research articles. Dump them on Gdocs, tweet the link. Think of the great blu-ray encoding protest but on a bigger scale for research articles." Early this morning the Anonymous Twitter account also announced its support for the action. Please share: Academics posting their papers online in tribute to Aaron Swartz using hashtag #pdftribute #ICYMI — Anonymous (@YourAnonNews) January 13, 2013

The Secret To Creativity, Intelligence, And Scientific Thinking There’s a key difference between knowledge and experience and it’s best described like this: The image is from cartoonist Hugh MacLeod, who came up with such a brilliant way to express a concept that’s often not that easy to grasp. The image makes a clear point—that knowledge alone is not useful unless we can make connections between what we know. Whether you use the terms "knowledge" and "experience" to explain the difference or not, the concept itself is sound. Lots of great writers, artists and scientists have talked about the importance of collecting ideas and bits of knowledge from the world around us, and making connections between those dots to fuel creative thinking and new ideas. This is a really fun, inspiring topic to read about, so I collected some quotes and advice from my favorite creative thinkers about the importance of making connections in your brain.

Bernard Krisher Bernard Krisher (* 1931) was born in Frankfurt and left Germany in 1937 at the age of six via Paris and Lisbon eventually settling in New York in 1940 with his parents. At age 12, Krisher published his own magazine and edited his high school and Queens College newspapers. Later he worked for the New York Herald Tribune and the New York World-Telegram & Sun. He spent a year doing Japanese area and language studies at Columbia University in 1961 and 1962 as a Ford Foundation Advanced International Reporting Fellow. He joined Newsweek 's Tokyo bureau, and became bureau chief until 1980. Memorial law proposed by Silicon Valley congresswoman A congresswoman from Silicon Valley is planning to introduce legislation to amend the law used to prosecute Aaron Swartz, the free information activist who killed himself on Friday. Representative Zoe Lofgren, a Democrat who represents California's 19th district, launched "Aaron's law", her draft bill to change the Computer Fraud and Abuse Act, on Reddit on Tuesday night. Swartz, a co-founder of Reddit, was charged with wire fraud, computer fraud and other crimes for allegedly accessing and downloading academic documents from the JSTOR online database through the network of the Massachusetts Institute of Technology. The prosecution against him has been criticised as over-zealous and disproportionate and his family have accused MIT and prosecutors of being complicit in his death. If found guilty, he faced up to 35 years in jail, and although lawyers said plea bargain negotiations were underway before his death, his request for a solution which did not involve a prison term was denied.

Blogs Jacob Appelbaum says that a number of Tor's development projects are inspired by the needs of the people that Tor works with around the world. Many of these people are working on the front lines of human rights and political activism. “When working with Laura Poitras it became clear that there were key areas where improving her ability to use anonymity and encryption software would greatly strengthen her ability to continue her work. Farewell to Aaron Swartz, an extraordinary hacker and activist Yesterday Aaron Swartz, a close friend and collaborator of ours, committed suicide. This is a tragic end to a brief and extraordinary life. Aaron did more than almost anyone to make the Internet a thriving ecosystem for open knowledge, and to keep it that way. His contributions were numerous, and some of them were indispensable. When we asked him in late 2010 for help in stopping COICA, the predecessor to the SOPA and PIPA Internet blacklist bills, he founded an organization called Demand Progress, which mobilized over a million online activists and proved to be an invaluable ally in winning that campaign.