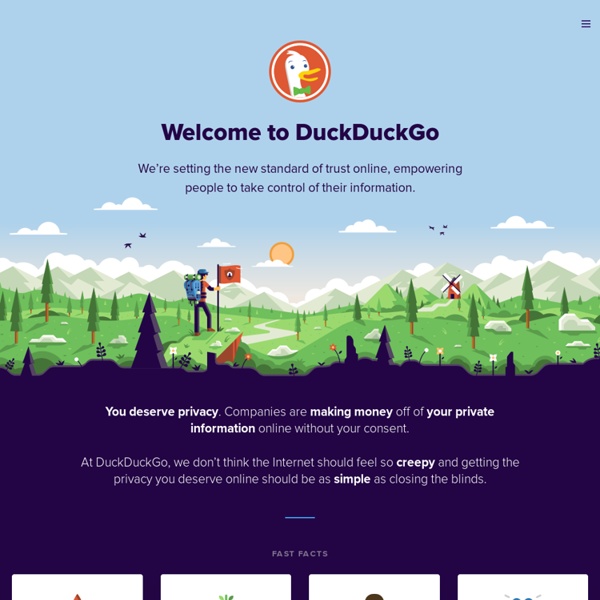 To give you great search results without tracking you. DuckDuckGo all started with the name and an idea to make answers easier to find. In early 2008, Gabriel emerged from his basement with a plan. He soon made it official by incorporating DuckDuckGo. Within the year, DuckDuckGo was announced to the Hacker News community. We survived!

Lonie McMichael's Blog Well, Talking Fat is now in print. Acceptable Prejudice?: Fat, Rhetoric and Social Justice is in review and about to go to Pearlsong Press. It’s time to start on my third project, The Unlovable Child: Collateral Damage in the War on Obesity. 17 of the coolest hidden Google tricks Google is awesome. Yes, there have been questions raised about its new privacy policy and creepy Safari tracking and frankly, it just knows way too much about everyone who has ever created a Google account. But let’s put that aside for a moment and focus on all its cool quirks, shall we? They’re built into practically every Google product — if you look hard enough, you’ll find that entering the right search term or typing a code can make Google collapse, spin or create fictional characters.

'We made a mistake': Instagram apologizes after removing plus-size woman's photo - Health Wellness Marisa Kabas TODAY contributor 1 hour ago Meghan Tonjes is proud of her body, and was trying to show off her curves in an Instagram photo when she ran into a roadblock: The social network removed the image. After posting a picture of her rear end, the plus-size musician and vlogger received a message from Instagram that the photo had been removed "for violating our Community Guidelines." Tonjes was upset at what she felt was unfair treatment because of her weight, given that celebrities like Kim Kardashian and models like Emily Ratajkowski often post similar or more revealing photos.

Find - Directory of Open Access Repositories Search or Browse for Repositories <intR>²Dok "Ergani - Historical Archive of Aegean" Repository The Best Photoshop Tutorials to Turn you into a Better Designer – Part III'corePHP' Blog With this article, we have now reached the third part of the series. Till now you have learned quite a lot of tips, tricks and useful techniques in Photoshop. You have also learned about the various tools and options in Photoshop, how they work and how you can bring the most out from them. Buddhology Schools > Students > Ages 17-18 > The Buddha > Buddhology Written for the AQA syllabus by Robert Ellis, formerly a member of the Triratna Buddhist Order and a former Head of RS in a 6th-form college. The term 'Buddhology' has been constructed by some scholars of Buddhism by analogy with the Christian term 'Christology'. Christology is the study of the nature and attributes of Christ, and likewise 'Buddhology' refers to the study of the nature and attributes of the Buddha. Theories about the nature of the Buddha developed increasing philosophical sophistication in the Mahayana, culminating in the Trikaya or 'Three Bodies' doctrine of the Yogacara School.

12 Ways To Integrate (Not Just Use) Technology In Education There are a couple dozen ways to ‘use’ technology in education. There are also a couple dozen ways to integrate technology in education. Think those two things are the same? Think that throwing a few iPads and a few Edudemic blog posts into a classroom is the best way to launch a 1:1 initiative? In case you couldn’t guess, it’s not. So here’s a hypothetical to clear up my rhetorical questions even more: Free All-in-One Graphic Design Starter Kit Graphic design has an amazing community. Comprised of both the vets from the pre-computer era to the newbies who were raised on the internet and computer-editing applications, there is a huge gamut of people sharing their work and expertise online. I know when I was starting out in design, I found tons of inspiration and information from sites like JustCreativeDesign, DesignNewz, and more. If there’s one issue, however, it’s that there’s almost too much great information out there. I know – good problem to have, right? But for those designers just starting out, or for those designers who are considering getting into design, the amount of information can be a little overwhelming.

How Obesity Became a Disease — The Atlantic Health And, as a consequence, how weight loss became an industry Please consider disabling it for our site, or supporting our work in one of these ways Subscribe Now > Multimedia Educational Resource for Learning and Online Teaching Return to MERLOT II Home Page Search all MERLOT Select to go to your profile Click to expand login or register menu

OAIster [OCLC - Digital Collection Services] Access to OAIster A freely-accessible site for searching only OAIster records is available at Additionally, OAIster records are fully accessible through WorldCat.org, and will be included in WorldCat.org search results along with records from thousands of libraries worldwide. They will also continue to be available on the OCLC FirstSearch service to Base Package subscribers, providing another valuable access point for this rich database and a complement to other FirstSearch databases. 100 Websites You Should Know and Use Entertainment Meet David Peterson, who developed Dothraki for Game of Thrones There are seven different words in Dothraki for striking another person with a sword. Among them: “hliziﬁkh,” a wild but powerful strike; “hrakkarikh,”a quick and accurate strike; and “gezrikh,” a fake-out or decoy strike.

The Well-Rounded Mama: gastric bypass One of the most distressing things about Weight Loss Surgery (WLS) I have observed over the years has been the tendency of many people who get WLS to disappear after a few years. I've been thinking about this a lot and have debated voicing my concerns in a public forum. I don't want to add to the stigma and shame that some post-WLS folks experience, yet I think it's important to highlight this issue. Over the years, I've had several friends and acquaintances undergo WLS, usually gastric bypass.