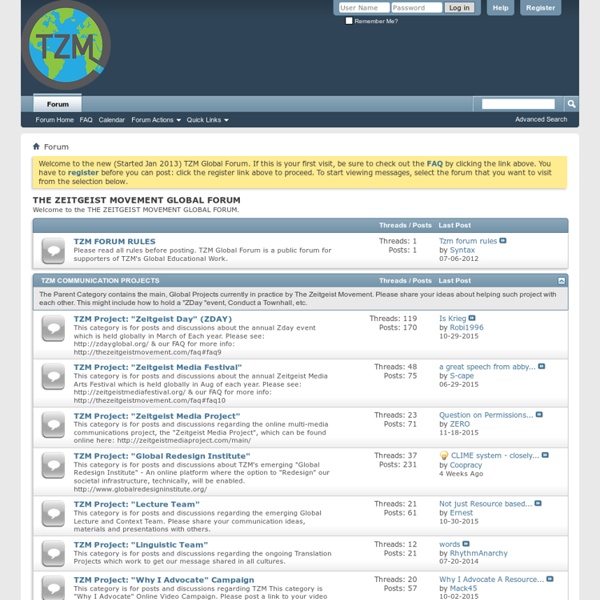 Welcome! Read Me :) TZM Frequently Asked Questions (1) What is The Zeitgeist Movement? The Zeitgeist Movement is an explicitly non-violent, global sustainability advocacy group currently working in over 1000 Regional Chapters across 70 countries. The basic structure of The Movement consists of Chapters, Teams, Projects & Events. Overall, the Chapters are essentially what define the Movement and each Chapter works to not only spread awareness about the roots of our social problems today but also to express the logical, scientific solutions and methods we have at our disposal to update and correct the current social system and create a truly responsible, sustainable, peaceful, global society. Working through global and regional educational projects and community programs, the intermediate goal is to obtain a worldwide movement, essentially unifying the people, regardless of country, religion or political party, with a common value identification that we all invariably share, pertaining to our survival and sustainability. Infinite Growth

The Zeitgeist Film Series Gateway "Who Are You Protecting?" Freedom of Speech, freedom of assembly, and freedom of the press. These legal rights, guaranteed to United States citizens by the first amendment, are essential to our free democracy. It has allowed for several national revolutions, such as movements for black and female suffrage, to change public opinion and national tradition. Protests have been at the heart of American democracy since its creation, but recent action by the NYPD and other local police departments around the nation have been infringing upon the protestors’ constitutional rights, arresting and brutalizing them with disregard to their grievances. Occupy Wall Street was originally a public demonstration for the grievances most people share across the modern world; Americans are losing faith in our democracy as they suffer from unequal distribution of wealth, unreasonable devaluation of our currency by the Federal Reserve, and corporate involvement in our government. For further research/ Citations

Zeitgeist Movement Activist and Orientation Guide The Zeitgeist Movement is not a political movement. It does not recognize nations, governments, races, religions, creeds or class. Our understandings conclude that these are false, outdated distinctions which are far from positive factors for true collective human growth and potential. Their basis is in power division and stratification, not unity and equality, which is our goal. While it is important to understand that everything in life is a natural progression, we must also acknowledge the reality that the human species has the ability to drastically slow and paralyze progress, through social structures which are out of date, dogmatic, and hence out of line with nature itself. The world you see today, full of war, corruption, elitism, pollution, poverty, epidemic disease, human rights abuses, inequality and crime is the result of this paralysis. This movement is about awareness, in avocation of a fluid evolutionary progress, both personal, social, technological and spiritual.

Uk Forum seems to be hijacked by Hackers. by londonguy Oct 17