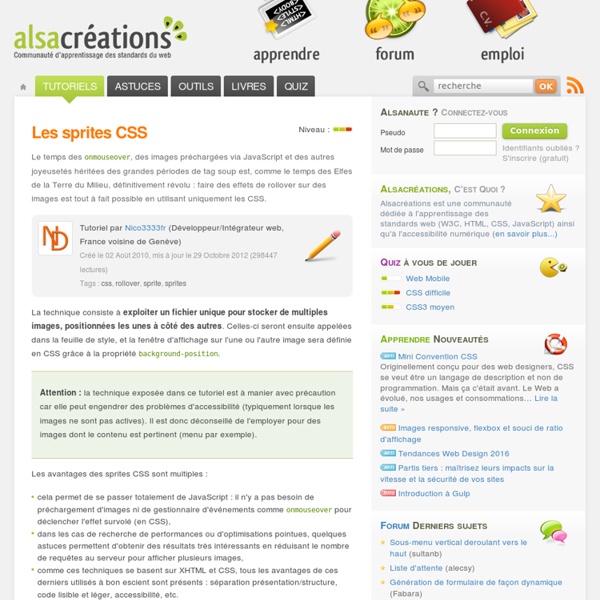 API v0.6 Available languages — API v0.6 is the current version of the OSM Editing API deployed 17-21 April 2009. This page was updated in March 2012 to reflect small changes applied since then, in April 2013 after the addition of the Map Notes API and in January 2016 after the addition of changeset discussions. This Editing API is based on the ideas of the RESTful API. For more information on RESTful APIs see wikipedia's Representational State Transfer page. The API is the server component to which REST requests are addressed.

CSS Compressor, Free CSS Compressor and CSS Compression Tool EASY - One Click CSS Compressor NO coding expertise required A click of the mouse is all you need to speed up your webpage load time by up to 80%! Most CSS can be compressed to one third its original size. Use CSS3 to Create a Dynamic Stack of Index Cards Recently we hear a lot about CSS3 and its features and even though there are already some web sites out there that take advantage of some of the CSS3 features (including DesignLovr) we hardly ever see the full potential of what can be achieved with CSS3. Today we’re going to take a step into that direction and discover some of the possibilities CSS3 gives us. We will create a dynamic stack of index cards solely with HTML and CSS3 and use such CSS3 features as transform and transition (for the dynamic effects) and @font-face, box-shadow and border-radius (for the styling). Let’s start with the simple HTML-markup, which consists of simple, unordered list, filled with random content. If you want you can download the icons I used at Tutorial 9.

HTML5 Presentation In March 1936, an unusual confluence of forces occurred in Santa Clara County. A long cold winter delayed the blossoming of the millions of cherry, apricot, peach, and prune plum trees covering hundreds of square miles of the Valley floor. Then, unlike many years, the rains that followed were light and too early to knock the blossoms from their branches. Instead, by the billions, they all burst open at once. Seemingly overnight, the ocean of green that was the Valley turned into a low, soft, dizzyingly perfumed cloud of pink and white. Uncounted bees and yellow jackets, newly born, raced out of their hives and holes, overwhelmed by this impossible banquet.