Pandemic Watch: Another insider announces that a global pandemic is imminent 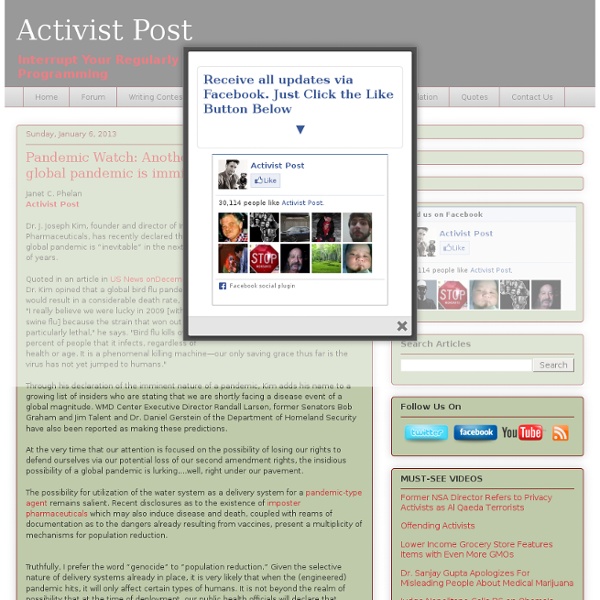 Janet C. Phelan Dr. Quoted in an article in US News onDecember 24, Dr. Through his declaration of the imminent nature of a pandemic, Kim adds his name to a growing list of insiders who are stating that we are shortly facing a disease event of a global magnitude. At the very time that our attention is focused on the possibility of losing our rights to defend ourselves via our potential loss of our second amendment rights, the insidious possibility of a global pandemic is lurking....well, right under our pavement. The possibility for utilization of the water system as a delivery system for a pandemic-type agent remains salient. Truthfully, I prefer the word “genocide” to “population reduction.” Dr. Merck has been under scrutiny for a number of years for problems with its products, including drugs such as Temodar, PegIntron, and Intron A. Inovio continues to partner with Merck, according to the Inovio website. Dr. Dr. Read other articles by Janet Phelan Here

Are You Ready Series: Pandemic Preparedness Let’s cut to the chase, it is very difficult to prepare for epidemics and pandemics especially for those living in close proximity to others. These natural reoccurring disasters tend to occur suddenly and without warning. According to the Center for Disease Control (CDC), serious, deadly contagious disease outbreaks can and do happen. CDC investigates new contagious diseases—averaging one new contagion per year. These new contagious diseases can emerge right here or only a plane-ride away from here. Looking back at the Black Plague, those living in high populated areas were hit hardest by this pandemic. Many believe the misuse of antibiotics in the past has led to the dangers of super bugs such as the spread of MRSA — or methicillin-resistant Staphylococcus aureus. Before we get into the meat and potatoes of pandemic preparedness, let’s look at the changes that will likely occur in your community if this disaster were to occur: Community Preparedness Will Play a Large Role Source Google+

Jon Rappoport's Blog Forget REAL ID -- The Global Smart-ID is coming! Julie BealActivist Post The grand plan for Global ID is to give each person on the planet a way to identify themselves online. One ID number for each person, to signify all that they are. This is the full personal profile containing anything relevant for identification purposes. If you want to sign up to the online identity ecosystem, you can already do so through Google or Yahoo! And if you don’t want anything to do with it, it’ll be tough, if not impossible, to get by in the future, because you’ll have to use your global ID to access all government services and healthcare services, to drive a car, and, once cash is gone, to pay for anything. In America, the Kantara Initiative (previously the Liberty Alliance) has been working with the Obama Administration to establish this global ID management system, and will soon be rolling it out nationwide, as a way to minimise fraudulent use of electronic health records (EHRs). Dig deep into your memories, and see if you remember the NSTIC?

The hepatitis C study America never heard about - The Berkson Clinical Study (NaturalNews) If someone were to take a look at the impressive credentials of Dr. Burton Berkson they would likely think that any study he conducted would easily find its way to publication - especially one which demonstrated remarkable success against chronic hepatitis C. Such was not the case with the Berkson Clinical Study in the U.S., despite Dr. Berkson's credentials. Instead, the U.S. study ended up being published in the German medical journal Medizinishche Klinik. A sample of Dr. Assist. Why the study wasn't published in the U.S. The last two items in the credentials may give a hint of why Berkson's study was never published in America. Antiviral treatment costs range well upwards of tens of thousands of dollars annually. The Berkson Clinical Study The patients also took vitamins B, C, and E and a mineral supplement each day. The patients The results From the study's conclusion: Sources: Mr.

Cleaning, Disinfection, and Sterilization of medical instruments and supplies in survival situations In survival situations, medical emergencies will arise. One of the main concerns with any medical procedures is clean, sterilized equipment so as to not pass on infection and compound or completely compromise any medical procedures that must be done.. Here is a basic primer on disinfection and sterilization in survival situations Q. A. Sterility is only a temporary state – once sterile packaging is open or the product has been removed from an autoclave colonization begins almost immediately just from exposure to air and bacteria present in the environment. Q. A. Infection rates are no greater if a superficial wound has been irrigated and cleaned with tap water vs. being cleaned and irrigated with sterile saline. Expendable vs. Expendable supplies are used once and discarded. Sterilisation of specific items: Syringes: There are two types of syringes: disposable and reusable. The best method to sterilise syringes is to use a rack to suspend the barrel and plunger. Surgical instruments:

20 Uses for Flour (Besides Cooking) Everyone has flour in their home and do not realize that there are more uses for this age old grain product besides cooking. Here are 20 alternative uses of flour 1. Make modeling clay. To make a simple clay, just mix 3 cups flour with 1 cup water, ¼ cup salt, and 1-2 tablespoons vegetable oil. 2. Similar to modeling clay but not meant for baking, play dough is easy to make and lasts a lot longer. 3. Cloud dough is a fun and funky sensory experience for children. 4. You can help keeps ants at bay by sprinkling a thick line of flour wherever you see them entering or exiting. 5. You can use dry flour and a cloth rag to buff your stainless steel sink, appliances, etc. 6. You can also polish copper using a mixture of equal parts flour, salt, and white vinegar. 7. You can spruce up an old playing deck by dropping the entire thing (loose) into a paper bag with about a ¼ cup of flour. 8. 9. We all did this in elementary school, right? 10. 11. 12. 14. 15. 16. 17. 20.