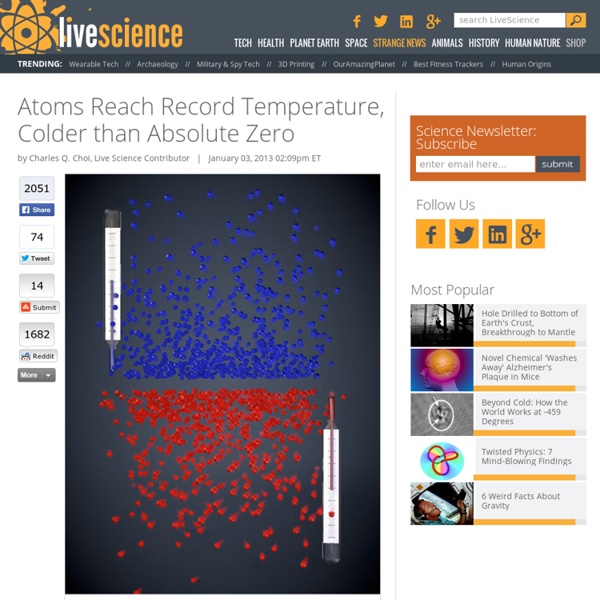 Personal and Historical Perspectives of Hans Bethe Physics Community Afire With Rumors of Higgs Boson Discovery | Wired Science One of the biggest debuts in the science world could happen in a matter of weeks: The Higgs boson may finally, really have been discovered. Ever since tantalizing hints of the Higgs turned up in December at the Large Hadron Collider, scientists there have been busily analyzing the results of their energetic particle collisions to further refine their search. “The bottom line though is now clear: There’s something there which looks like a Higgs is supposed to look,” wrote mathematician Peter Woit on his blog, Not Even Wrong. The possible news has a number of physics bloggers speculating that LHC scientists will announce the discovery of the Higgs during the International Conference on High Energy Physics, which takes place in Melbourne, Australia, July 4 to 11. The new buzz is just the latest in the Higgs search drama. The latest Higgs rumors suggest nearly-there 4-sigma signals are turning up at both of the two separate LHC experiments that are hunting for the particle.

The Measurement That Would Reveal The Universe As A Computer Simulation One of modern physics’ most cherished ideas is quantum chromodynamics, the theory that describes the strong nuclear force, how it binds quarks and gluons into protons and neutrons, how these form nuclei that themselves interact. This is the universe at its most fundamental. So an interesting pursuit is to simulate quantum chromodynamics on a computer to see what kind of complexity arises. The promise is that simulating physics on such a fundamental level is more or less equivalent to simulating the universe itself. There are one or two challenges of course. The physics is mind-bogglingly complex and operates on a vanishingly small scale. That may not sound like much but the significant point is that the simulation is essentially indistinguishable from the real thing (at least as far as we understand it). It’s not hard to imagine that Moore’s Law-type progress will allow physicists to simulate significantly larger regions of space. First, some background. What they find is interesting.

The mention of “spin” of a particle is one that... - Say It With Science Two Diamonds Linked by Strange Quantum Entanglement | Spooky Action at a Distance | Quantum Mechanics Macroscopic Objects Scientists have linked two diamonds in a mysterious process called entanglement that is normally only seen on the quantum scale. Entanglement is so weird that Einstein dubbed it "spooky action at a distance." It's a strange effect where one object gets connected to another so that even if they are separated by large distances, an action performed on one will affect the other. Entanglement usually occurs with subatomic particles, and was predicted by the theory of quantum mechanics, which governs the realm of the very small. But now physicists have succeeded in entangling two macroscopic diamonds, demonstrating that quantum mechanical effects are not limited to the microscopic scale. "I think it's an important step into a new regime of thinking about quantum phenomena," physicist Ian Walmsley of England's University of Oxford said." Another study recently used quantum entanglement to teleport bits of light from one place to another.

What the Dalai Lama can teach us about temperatures below absolute zero What can these three teach us about temperature? There’s been a lot of buzz lately in the science blogosphere about a recent experiment where physicists created a gas of quantum particles with a negative temperature – negative as in, below absolute zero. This is pretty strange, because absolute zero is supposed to be that temperature at which all atomic motion ceases, where atoms that normally jiggle about freeze in their places, and come to a complete standstill. Presumably, this is as cold as cold can be. Can anything possibly be colder than this? Here’s the short answer. To understand this, we first need to know what physicists mean by temperature. This definition really made sense to me when I could see it for myself, so here is a simulation where you can play around with gas molecules. So far, so good. Here’s the new definition that they came up with. Now, if you don’t speak math, I’m going to let you in on a little secret. Here’s the analogy. References

Amplituhedron An amplituhedron is a geometric structure that enables simplified calculation of particle interactions in some quantum field theories. In planar N = 4 supersymmetric Yang–Mills theory, an amplituhedron is defined as a mathematical space known as the positive Grassmannian. The connection between the amplituhedron and scattering amplitudes is at present a conjecture that has passed many non-trivial checks, including an understanding of how locality and unitarity arise as consequences of positivity. Research has been led by Nima Arkani-Hamed. Edward Witten described the work as “very unexpected" and said that "it is difficult to guess what will happen or what the lessons will turn out to be Description[edit] Using twistor theory, BCFW recursion relations involved in the scattering process may be represented as a small number of twistor diagrams. Implications[edit] See also[edit] References[edit] Notes[edit] Bibliography[edit] External links[edit]

putting a 1/2" neodymium magnet in ferrofluid Efimov state The Efimov effect is an effect in the quantum mechanics of Few-body systems predicted by the Russian theoretical physicist V. N. Efimov[1][2] in 1970. Efimov’s effect refers to a scenario in which three identical bosons interact, with the prediction of an infinite series of excited three-body energy levels when a two-body state is exactly at the dissociation threshold. One corollary is that there exist bound states (called Efimov states) of three bosons even if the two-particle attraction is too weak to allow two bosons to form a pair. A (three-particle) Efimov state where the (two-body) sub-systems are unbound, are often depicted symbolically by the Borromean rings. The unusual Efimov state has an infinite number of similar states. In 2005, for the first time the research group of Rudolf Grimm and Hanns-Christoph Nägerl from the Institute for Experimental Physics (University of Innsbruck, Austria) experimentally confirmed such a state in an ultracold gas of caesium atoms.