How The Memory Works In Learning 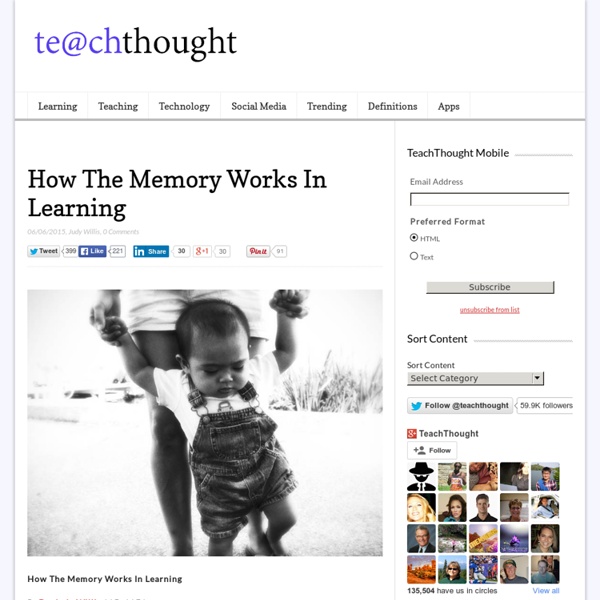 How The Memory Works In Learning By Dr. Judy Willis, M.D., M.Ed. Teachers are the caretakers of the development of students’ highest brain during the years of its most extensive changes. As such, they have the privilege and opportunity to influence the quality and quantity of neuronal and connective pathways so all children leave school with their brains optimized for future success. This introduction to the basics of the neuroscience of learning includes information that should be included in all teacher education programs. Teaching Grows Brain Cells IQ is not fixed at birth and brain development and intelligence are “plastic” in that internal and environmental stimuli constantly change the structure and function of neurons and their connections. It was once believed that brain cell growth stops after age twenty. High Stress Restricts Brain Processing to the Survival State Memory is Constructed and Stored by Patterning Memory is Sustained by Use The Future References Ashby, C.

Ofsted 2012: Questioning to promote learning — From Good to Outstanding Have you ever noticed that often, when someone is being interviewed, they say “That’s a good question.”? It’s usually when it’s a question they can’t answer quickly and easily. Indeed, “good” questions are ones that generally need thinking about. Description of Transactional Analysis and Games by Dr. Eric Berne MD The following is an introductory description of Transactional Analysis. It is designed to be understood by the layperson, written with approximately the same level of complexity that Berne used for Games People Play. Psychoanalysis before Eric Berne While there were many theories purporting to explain human behavior before Eric Berne, the most frequently cited and known is the work of Sigmund Freud.

8 Characteristics Of A Great Teacher 8 Characteristics Of A Great Teacher by Ian Lancaster What makes a teacher strong? What differentiates the best from the rest? There’s no shortage of bodies (some dramatically misguided) attempting to solve this riddle. Augmented Reality in English Language learning I recently attended Interfacing with Public Space: Embodied language learning with mobile technologies a workshop delivered by Paul Driver who is an educational technologist and co-author of Language Learning with Digital Video series. During the workshop I got introduced with a free augmented reality application Aurasma and how it is used to create and design learning materials for classes. Augmented Reality (AR) is defined as ”a variation of Virtual Environments (VE), which allows the user to see the real world, with virtual objects superimposed upon or composited with the real world.” AR-based mobile learning material helps engage learners in numerous learning activities.

5 Common Misconceptions About Bloom's Taxonomy 5 Common Misconceptions About Bloom’s Taxonomy by Grant Wiggins, Authentic Education Admit it–you only read the list of the six levels of the Taxonomy, not the whole book that explains each level and the rationale behind the Taxonomy. Not to worry, you are not alone: this is true for most educators. But that efficiency comes with a price. Learning First, Technology Second The Educator’s Guide to Designing Authentic Lessons By Liz Kolb By Liz Kolb Learning with technology doesn’t happen because a specific tool “revolutionizes” education. It happens when proven teaching strategies intersect with technology tools, and yet it’s not uncommon for teachers to use a tool because it’s “fun” or because the developer promises it will help students learn. Learning First, Technology Second offers teachers the professional learning they need to move from arbitrary uses of technology in their classrooms to thoughtful ways of adding value to student learning. This book includes: About the Author

Vygotsky's constructivism Chad Galloway The University of Georgia Vygotsky's Theories The work of Lev Vygotsky and other developmental psychologists has become the foundation of much research and theory in developmental cognition over the past several decades, particularly of what has become known as social development theory. Why Schools Should Be Wary Of Free Tech Products When I was a middle school science teacher, I oftentimes found myself digging into my own pockets to pay for equipment — Bunsen burners, test tubes, dead frogs. And that didn’t change when one-to-one iPad programs in schools became popular; in fact, it added yet another item, software, to my to-buy list. So, you can imagine my excitement when I found free online products, especially those that seemed flashy. It didn’t even cross my mind back then that using free tools (and more importantly, asking my students to use free tools) could be problematic and even potentially dangerous — more so than the free consumer products I was finding online and using in my own time. But in the world of edtech, “free” isn’t only a danger to the users — it’s quickly becoming more and more of a danger to the makers of edtech, as well.

Group Development Using the Class Group Groups take time to develop. How long, of course, is impossible to specify. It depends on size, frequency of interaction, structural features, and so on. However, one of the best-known bits of literature on groups is Tuckman's model of group development, based on a meta-analysis of the complex models which had previously been developed. It has the virtue of being memorable, but the limitation of being rather rigid. Situated learning This clumsy phrase is the central principle of a quite different kind of learning theory, situated learning, which is primarily social rather than psychological and originates from Lave and Wenger (1991). Based on case-studies of how newcomers learn in various occupational groups which are not characterised by formal training, they suggest that legitimate peripheral participation is the key. The case-studies include traditional midwives in Yucatan, tailors in Liberia, butchers in supermarkets, and quartermasters in the US Marine Corps. (I am not quite clear what quartermasters do in that service, but it is clearly different from in UK services) It may be clumsy but it is worth almost as much as "Zone of Proximal Development" in the jargon stakes More

Emotional Intelligence theories - Daniel Goleman's EQ concepts This webpage is a new format for mobile/small screens. Please send your feedback if it fails to operate well. Thanks. Unpacking the Problem of Unmotivated Online Students Recently, I received this message from a college professor in response to a blog post I wrote: “I truly believe in the benefits of online learning; but only for those who really want to learn. And unfortunately, those students are few and far between—maybe 5 to 10 percent ... I have found many professors at my university and at conferences agree with this.

A Dictionary For 21st Century Teachers: Learning Models Learning Models, Theories, and Technology: A Dictionary For 21st Century Teachers by Terry Heick and TeachThought Staff Purpose: Improving our chance for a common language in discussing existing and emerging learning trends, model, and technology in hopes of innovation in classrooms, and collectively, education at large. Audience: K-12 & higher ed educators, researchers, institutions, and organizations globally. Form: An index of learning models, theories, forms, terminology, technology, and research to help you keep up with the latest trends in 21st century learning. This page was created and is updated by Terry Heick and TeachThought Staff, who you can contact directly with suggestions for terms, improved citations, corrections, or additions to the index.