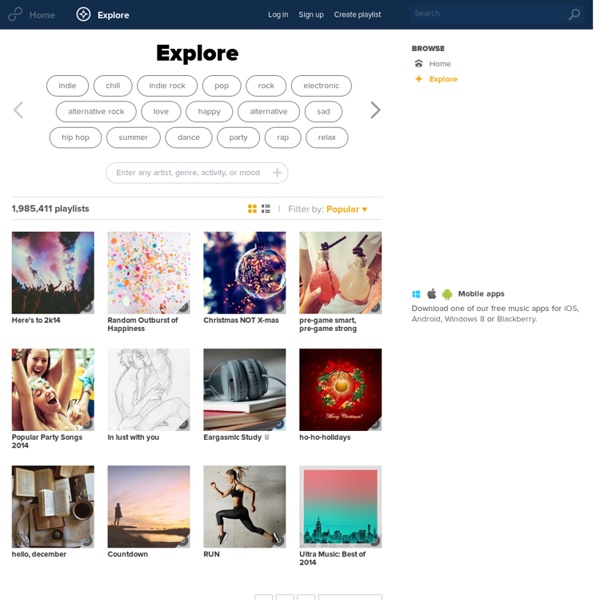 The 10 Best Disney Songs You've Never Heard Anyone can whistle or sing their favorite Disney song, but for every ‘Under the Sea’ and ‘A Whole New World,’ there are dozens of orphaned tunes that never made it into their respective film. Too bad, since many of these unfortunate victims of time constraints or script rewrites are really catchy. However, many of these never-before-seen songs have surfaced online with their accompanying storyboards to let us sigh and wonder at what might have been. Take a look at 10 great Disney songs that were left on the cutting room floor. The creative team of 'Aladdin' had to make numerous changes to the film, including cutting many songs, characters and trimming the plot.

10 Sites for Downloading Free & Legal MP3 Ever since Napster, the words “Download MP3″ have almost always been associated with piracy. Although MP3 files are still very popular in many P2P services (and will probably continue to be so), there are plenty of sites and services that allow you to download MP3 files – in a legal manner and absolutely free. 10 Sites with Free & Legal MP3 Downloads ClearBits – This site provides hosting and distribution for open licensed media. ClearBits distributes high quality, open-licensed (Creative Commons) digital media, datasets, and artwork for Content Creators. You can find many interesting MP3 files here. How-To: Easily Remove the Vocals from Most Songs 2015 Shortcut: When I wrote this article Audacity didn’t have an automatic center-panned vocal canceling effect… but now it does, so rather than do the stereo-separate / invert-one-track / play-both-as-mono trick (and that’s pretty much all there is to it), you should be able to find the Vocal Remover option in the Effects menu – but it’s more fun / interesting and can give better results if you do it yourself! =D I found this trick the other day whilst stumbling the Interwebs and thought I’d do a quick-write up w/ pictures to make it as easy as possible… For this exercise we’re going to be using a piece of free audio software called Audacity, which you can get for Linux, Windows and Mac. Update: If you’re trying this out on a Mac, please make sure you get Audacity 1.3 Beta or newer – the stable 1.2 version appears to have a missing equaliser decibal-range slider which you need towards the end of the process! 1.) Import Some Audio

10 More Enigmas That Defy Explanation Mysteries What is it about the bizarre and mysterious that piques our curiosity? It entertains our sense of wonder and excites our imagination, for sure. Luckily for us, history is marked with strange, logic-defying occurrences to amuse us. Here is a list comprised of 10 more unexplainable and interesting phenomenon and incidents that we crave so much. Visual Culture & Jammin' in the Rain Jammin’ in the Rain Rain doesn’t have to be dreary. The Rain Drum is a beat making product that features mounted sound inputs on the exterior of an umbrella top that make different drum noises when raindrops touch it. The shade of the umbrella contains five wax-cloth coverings with varying elasticities to create a range of tones and frequencies, depending on the size and speed of the falling rain drop.

The 100 Best Workout Songs from the '90s I have a theory about music and it's this: Whatever music you listened to and loved the most during your high school and college years will always be your favorite music of all time. So for myself, all the other early-30-somethings, and everyone else who believes some of the best music ever has already been created, I am thrilled to share the mother of all '90s music lists. But this isn't just any list.

Sounds To Sleep To Verbal Vomit: How to be a Hipster, Chapter 1 Hipster is a slang term that first appeared in the 1940s, and was revived in the 1990's and 2000's to describe types of young, recently settled urban middle class adults and older teenagers with interests in non-mainstream fashion and culture, particularly indie-rock, independent film, magazines such as Vice and Clash, and websites like Pitchfork Media.[1] In some contexts, hipsters are also referred to as scenesters. Do you want to be a Hipster? Do you wish you could join those sparkling beautiful people that you see pedaling past your house? Well, throw your TV's away, buy yourself a sturdy canvas bag, talk about joining the Peace Corp and read this short guide on becoming what you've always dreamed of: A Hipster.

Find New Music We Are Hunted What the hell is everyone else listening to? We Are Hunted is a damn good looking and highly interactive music listening/discovery service that scrapes tracks from all sorts of blogs and P2P services to create emerging, mainstream, and genre-based charts. There's lots of info about artists, including tour dates, plus a Pandora-esque element to it to, allowing you to generate custom playlists based on your tastes or an artist. The 50 best uses of songs in movies - Film - Time Out New York Pulp Fiction Colloquially, it used to be called the "needle drop"—when a Martin Scorsese or Quentin Tarantino picked a piece of preexisting music and laid it down under a dramatic scene, with seismic results. We've thumbed through our stacks of wax (i.e., Blu-ray collections) to collect cinema's most potent examples, allowing for iconic uses of classical music and jazz along with the expected pop hits. One parameter, though: no songs composed for the movie itself. (Sorry, Simple Minds.) The result is our most toe-tapping list to date.

7 Alternatives to Pandora and Last.FM Whether you are annoyed by the ads on Pandora, the limited number of skips, or the abyss of cruel 30-second song teasers from Last.FM, many online listeners are growing weary of mainstream methods of hearing new music. While the Pandora algorithm is strong, and the Last.FM related artists tool is pretty useful, don’t fool yourself in to thinking that there aren’t other great ways to expose yourself to new music in the depths of cyberspace. Here are 7 alternatives to Pandora and Last.FM that will infuse your day with an uninterrupted stream of music that large record companies haven’t managed to squash under their thumbs yet. StumbleAudio StumbleAudio has a killer recommendation engine that works better for me than Pandora’s. Instead of “genomes”, StumbleAudio uses listeners’ favoritism as well as buying pattern data from online music stores to make suggestions.

Tomahawk, the Most Important Music App Nobody's Talking About In order for a technology to take off these days, it has to be simple. Twitter, Facebook, iTunes, Spotify — each can be summed up in a sentence or so and readily understood from the very first time you use it. [partner id="evolverfm"]Tomahawk is more complicated, but if you’re a music fan who listens to music on a laptop or desktop — and has friends who do, too — it warrants a try, and possibly a place in your quiver of favorite music apps.

'Walk Off the Earth' Gets 50 Million YouTube Views in a Month Meet Walk off the Earth, the ultra-talented quintet that turned its version of a sleeper hit into a viral phenomenon on YouTube and earned itself a record deal. The Canadian indie band posted a video covering Gotye's "Somebody That I Used to Know" last month, and it has since been viewed on YouTube nearly 50 million times. The clip shows the band playing on a single guitar. One strums the guitar while the others tap and pluck along. Now the band — which has been together for nearly six years — has earned itself a record deal with Columbia Records.