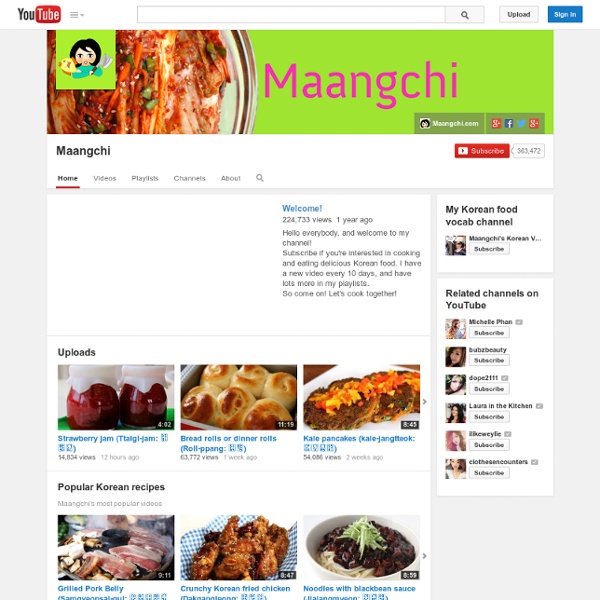 Visiting the Hello Kitty Cafe in Sinchon, Seoul! - These Temporary Tents by Aadel Bussinger Can you guess where we went this week?! If anyone was exited to move to Korea, it was Denna. She did a lot of research before we left on what fun things there were to do and explore. We made a bucket list of all her favorite choices. Dahi Ke Kebab Recipe You know that kebabs are essentially grilled or roasted meat and vegetables. So, if I told you I was going to make kebabs out of curd, you would think I was loosing it. The soft texture of curd would make it a ridiculous choice of ingredient for a kebab, right? Or so I thought till I sampled these dahi kebabs at an office party. We ladies analyzed and examined the ingredients, debated and deliberated about how it was made till the kind waiter informed us that it was made of hung curd. Draining the water out of the curd made it like soft cheese, he enlightened us.

UHS Thursday: Gwacheon Science Museum! - These Temporary Tents by Aadel Bussinger At some point Jay and I may or may not have promised Gus that we would find a place where he could see life-size dinosaur bones. And we might have freaked out a little afterwards with the thought that there might not be anything like that here in Korea. But never fear! We found an amazing science museum that not only had dinosaur bones, but animated dinosaurs! And tons of other cool stuff! The Gwacheon Science Museum (aka Scientorium) is located just South of Seoul at the Seoul Grand Park subway station. shahi paneer recipe, how to make shahi paneer recipe shahi paneer recipe with step by step photos – shahi paneer is one of the popular paneer (cottage cheese) recipe and also requested by many readers. shahi means royal and as the name suggest this is a royal paneer dish. literally translated to royal cottage cheese. dry fruits, yogurt, saffron, whole spices and sometimes cream is added to make this dish royal and rich. few more similar mughlai recipes posted on the blog are paneer do pyaza, veg masala, navratan korma, mughlai veg biryani and shahi paneer korma recipe. in this recipe, i have not used cream nor i have used butter or ghee. feel free to use cream or butter if you want them. the shahi paneer gravy or sauce is onions-almonds-cashew-melon seeds based. so this is very rich with the dry fruits in there. plus there is also yogurt. the result is a creamy, aromatic, semi sweet gravy with soft paneer cubes. serve the shahi paneer with jeera rice or rotis or naan. shahi paneer recipe below:

UHS Thursday: Pyounghwa (Peaceful) Park - These Temporary Tents by Aadel Bussinger When you hear the word park – what is the image that comes into your mind? When I was a kid, it conjured images of swings, fields of grass to play sports, and maybe a sand pit for volleyball. Living all over the country, we noticed that the word park could mean different things. Sometimes we were very disappointed when discovering that a park on a map was really just a glorified playground. Or the kids would find it weird that a park was just a walking path and no real place to play. Here in Seoul, there seems to be two distinct kinds of areas you can find.

Aeri's Kitchen - Korean Cooking Congratulations to the winners. :) Winner Announcement for Sempio USA Hangshin Tteokbokki Contest Chef Idea Prize:Daria Burke Food Stylist Prize: Noshing with ParisSandy Hopkins Greek Spinach and Feta Pie (Spanakopita) - SocraticFood This is an original recipe for the famous Greek spinach and feta pie (spanakopita). It’s healthy, nutritious and a great idea for a dinner party. Spinach and feta pie (spanakopita) is one of my all-time favourite food. Honestly, I could eat the whole tray when my mum used to make it. I still remember the days when I was a student and returned to visit my parents. 10 Great Apps That Teach Hangul It’s pretty important to recognize that when you are learning a language like Korean, Japanese, or Chinese that you are not only learning a new way of speaking – but also of writing. A lot of the online sites and curriculum that we tried for Korean expected us to already be able to read in Hangul. That is frustrating, which is one of the reasons I highly recommend the italki community as well as Talk to me in Korean for getting started.