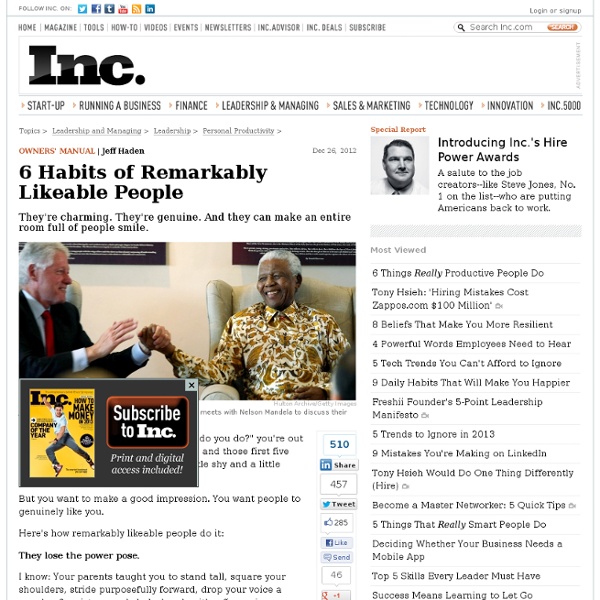 When you meet someone, after, "What do you do?" you're out of things to say. You suck at small talk, and those first five minutes are tough because you're a little shy and a little insecure. But you want to make a good impression. Here's how remarkably likeable people do it: They lose the power pose. I know: Your parents taught you to stand tall, square your shoulders, stride purposefully forward, drop your voice a couple of registers, and shake hands with a firm grip. It's great to display nonverbal self-confidence, but go too far and it seems like you're trying to establish your importance. No matter how big a deal you are you pale in comparison to say, oh, Nelson Mandela. Clinton takes a step forward (avoiding the "you must come to me" power move); Mandela steps forward with a smile and bends slightly forward as if, ever so slightly, to bow (a clear sign of deference and respect in nearly every culture); Clinton does the same. We all like people who like us. You meet someone. (Kidding.

How to Be More Charismatic: 10 Tips Some people instantly make us feel important. Some people instantly make us feel special. Some people light up a room just by walking in. We can't always define it, but some people have it: They're naturally charismatic. Unfortunately, natural charisma quickly loses its impact. But some people are remarkably charismatic: They build and maintain great relationships, consistently influence (in a good way) the people around them, consistently make people feel better about themselves--they're the kind of people everyone wants to be around...and wants to be. Fortunately we can, because being remarkably charismatic isn't about our level of success or our presentation skills or how we dress or the image we project--it's about what we do. Here are the 10 habits of remarkably charismatic people: 1. Ask questions. That's all it takes to show the other person they're important. Then when you do speak, don't offer advice unless you're asked. Don't believe me? 2. Because we do: We're all people. 3. 4. 5.

7 Secrets to a Killer Team Presentation I sit through a lot of presentations. These range from companies pitching me to portfolio companies presenting at board meetings. Each of these scenarios has a team presenting: almost always the CEO plus members of his or her management team, including tech, marketing, sales and/or product. Investors love teams. So part of seeing you with a team is to get a read on team dynamics -- and, believe me, all VCs discuss the team dynamics after you leave. Here are some guidelines for you, particularly for VC pitch meetings. 1. My golden rule is that if somebody on your team is attending the meeting, they need to talk. 2. The best way to involve your team members is to assign out slides they will own. 3. I know there will be times you don’t agree with how somebody answered a question. 4. Remember that more than 90% of all communications are non-verbal. 5. The hardest thing to coordinate is how to figure out who should answer questions when asked. 6. Any question a VC asks you is fair play. 7.

Keli Goff: The 5 Questions We All Ask That Are Absolutely None of Our Business Last week I ran into one of my TV buddies in a greenroom. I hadn't seen him in nearly a year, since we last appeared on a television program together. We did the sort of catching up that we do with those we haven't seen in a while. Now let me say for the record, that I know that he wasn't. Yet in a society in which every birth announcement is expected to go up on Facebook, with accompanying photo, before a new mother even exits the hospital, and celebrities air their dirty laundry during a breakup via Twitter, boundaries seem to have become a foreign concept. That doesn't mean we have to stop asking them necessarily. Click here to see a few bonus questions. 1.380727,103.836165 Managing People: What the Best Leaders Do I was struggling to engage the audience. Okay, be honest, I tried not to let it show but I was dying onstage. Maybe I was having an off day. Maybe they were having an off day. Or maybe the fact every one of the 100 people in attendance was a CEO, an executive, or the owner of a medium to large business meant they were way more accustomed to being listened to than they were to listening. So I took a different approach. Throwaway question? That was the point. They would sit and stare and then I would supply an intentionally against-the-grain answer sure to spark some heat and conversation. So I asked the question and then paused to read the room. I was about to speak when a voice broke the silence. "I think I know," a man sitting in the back corner said, somewhat hesitantly. A few heads turned in his direction. Mine did too, because I was a little surprised and a lot concerned. Wait--what? "Can you repeat that?" A number of heads slowly turned in his direction. I stared. Best answer ever.

The Rise of Augmented Reality This demand for richer, more engaging computing is a compelling manifestation of Augmented Reality (AR) and Artificial Intelligence (AI) – two fields of innovation now bursting into the public spotlight.They represent a phenomenon where the real word and virtual worlds are blended on handheld devices and wearable computers. The release of Google Glass today is a popular case in point. Google’s glasses are a form of wearable computing that locates a mini-projector in the wearer’s peripheral vision. This tiny screen overlays the real world with contextually relevant information from the web. People wearing Google Glass can see real-time data from the web including the names of objects, mapping directions, contact information and recent social media activity. Google Glass will also give people the ability to record high-definition video, run apps, and respond to voice commands. However, Google Glass is just the tip of the iceberg. According to Dr. Understanding the augmented business

What can go wrong when you stay at someone's house Judith Newman explains all the reasons why she would rather stay home than stay with a friend. Judith Newman lists the many ways things can go wrong when you stay with peopleNewman believes she suffers from 'an overabundance of politeness'Newman would rather spend time with friends and family then sleep at a hotel (RealSimple.com) -- "I am leaving," I murmured to my husband. "You cannot leave," he hissed back. "Don't worry. "You cannot do this again! Oh, but it wasn't just the doorknob. Using a turkey to tone your muscles Avoiding travel germs How not to get fat at Thanksgiving The traditions of Thanksgiving RealSimple.com: How to be a good friend Right then I knew only one thing: A doorknob was whispering to me, all Amityville Horror-like: GET. I have never been a good houseguest. But after years of trying very hard to enjoy myself when other people invite me over for the weekend, I've basically given up. Oddly, people don't always see it my way. He is incorrect. People's houses are quiet.

I'm A CEO With A Paycheck Of $0--And You Should Join Me We're all aware how A-list actors such as George Clooney and Brad Pitt usually make about $20 million up front and then 10% of the back-end to appear in a new motion picture. But if a performer really believes in their ability to bring people into theaters, the smart ones take far less, sometimes even zero dollars for a role and instead upgrade their back-end compensation. That's the way it's gone for years, most famously perhaps with Jack Nicholson, who took $6 million instead of his usual $10 million salary to play The Joker in 1989's Batman and traded the difference for a bigger cut of DVD and merchandising revenues that eventually gave him a $60 million payday. No one begrudges these actors for taking more back-end rewards, and we never judge a new Pitt or Clooney deal based on the past riches they've already garnered. Hollywood's elite is filled with actors who took massive pay cuts and instead gambled on future earnings. The way I see it, that same formula should apply to a CEO.

How to Perform Well Under Pressure: 7 Tips You're on stage. Three hundred pairs of eyes are fixed on you. You're killing: Twenty minutes in and the audience is in the palm of your hand. Then your slide show freezes up. Your skin tingles. You fall apart. As Beilock and Carr describe it, "Pressure raises self-consciousness and anxiety about performing correctly, which increases the attention paid to skill processes and their step-by-step control. Or, as those of us less learned describe it, you choke. Still, some how, some way, in the very same situation, other people don't choke. Maybe it's coolness under fire. Wrong. Some people do seem naturally confident and poised under pressure. People like you. How? You panic because you face an uncomfortable situation and you don't know what to do. That's why hanging tough when things go wrong isn't the result of bravery. And that's why the key to maintaining your poise during even the most stressful situations is to gain experience. 1. Run through your demo a number of times. 2. 3. Then... 4.

About Us | Juniper Research Services | Mobile Industry Experts | You are here: Home > About Us Tony Crabtree, Managing Director Juniper Research was founded in 2001 by the Wireless Industry Consultant Tony Crabtree, in the midst of the telecoms and dot-com crash. Juniper specialises in identifying and appraising new high growth market sectors within the mobile ecosystem. We endeavour to provide independent and impartial analysis of both current and emerging opportunities via a team of dedicated specialists - very knowledgeable, experienced and experts in their field. In terms of structure, Juniper is organised along five main streams: Mobile Content & Applications Mobile Commerce Handsets & Devices Mobile Markets & Strategies Networks & Technologies Each stream offers a blend of blogs, free whitepapers and paid-for research - normally in the form of research reports, strategic briefings and databases. You can download a powerpoint presentation of our product offering by clicking here Our offices are located in central Basingstoke, Hampshire.

Facebook Zero: Considering Life After the Demise of Organic Reach