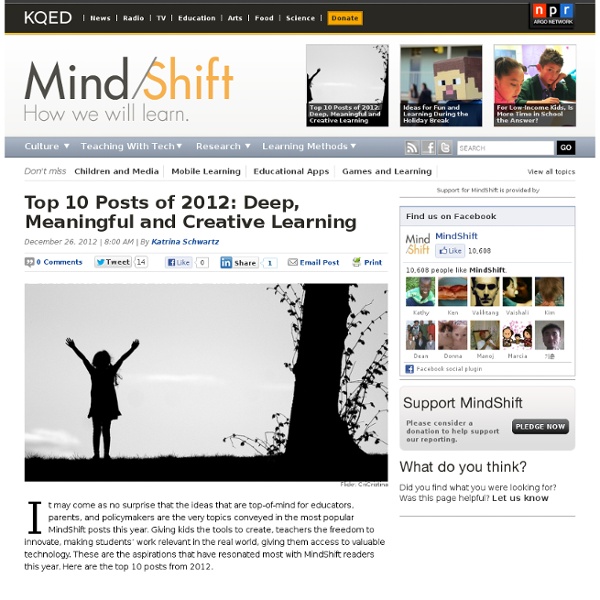 Flickr: CriCristina It may come as no surprise that the ideas that are top-of-mind for educators, parents, and policymakers are the very topics conveyed in the most popular MindShift posts this year. Giving kids the tools to create, teachers the freedom to innovate, making students’ work relevant in the real world, giving them access to valuable technology. These are the aspirations that have resonated most with MindShift readers this year. Being able to use the Internet and operate computers is one thing, but it may be just as valuable to teach students how to code. So much about how and where kids learn has changed over the years, but the physical structure of schools has not. The conversation in education has shifted towards outcomes and training kids for jobs of the future, and in many ways the traditional classroom has become obsolete. Can creativity be taught? At its core, the issues associated with mobile learning get to the very fundamentals of what happens in class everyday.

How Einstein Got So Smart – 10 Learning Hacks How would you feel if many people thought you were the smartest person in history? How might your life be different if you actually were that intelligent? Although we often think of Albert Einstein as one of the smartest people ever, we don’t investigate what it was that made him so. Einstein…the Failure? Before you get the list of Einstein’s learning habits, consider some interesting facts about his early life. These things represent just a taste of the irony about his early life. 10 Things Einstein Did to Get So Smart From what I can find, no one has compiled details about how Einstein actually studied. 1- He daydreamed and contemplatedWho has the right to say what is absentmindedness and what is pure genius? 8- He Relied on Faith to LearnEinstein’s faith was that by inquiry and discipline you could learn things about invisible objects or phenomena. Get this high resolution graphic (pdf) on Einstein’s Learning Hacks – for free! Sources (contains some commissioned affiliate links):

For Low-Income Kids, Is More Time in School the Answer? To help disadvantaged kids who are struggling to keep up in school, some education advocates believe that extending the school day could give them the extra boost they need. They argue that many parents can’t afford to send their kids to the varied extracurricular activities that wealthier children enjoy – leaving poorer kids with a sparse education that focuses primarily on testing. On that premise, five states recently announced that select school districts will participate in a three-year extended time pilot project funded with a mix of federal, state and district funds, along with private philanthropy from the Ford Foundation and National Center on Time and Learning. Extended-time advocates cite studies showing a gap in childhood opportunity that mirrors the widening income gap. But simply tacking on hours at the end of a school day is not the solution, according to some. “The goal is to use the extra time to change the entire school day. Related

Creativity 'closely entwined with mental illness' 17 October 2012Last updated at 06:49 GMT By Michelle Roberts Health editor, BBC News online Novelist Virginia Woolf killed herself Creativity is often part of a mental illness, with writers particularly susceptible, according to a study of more than a million people. Writers had a higher risk of anxiety and bipolar disorders, schizophrenia, unipolar depression, and substance abuse, the Swedish researchers at the Karolinska Institute found. They were almost twice as likely as the general population to kill themselves. The dancers and photographers were also more likely to have bipolar disorder. Continue reading the main story “Start Quote It is important that we do not romanticise people with mental health problems, who are too often portrayed as struggling creative geniuses” End QuoteBeth MurphyThe mental health charity Mind As a group, those in the creative professions were no more likely to suffer from psychiatric disorders than other people. Continue reading the main story Troubled minds

Good Read: MOOCs Take on the 1 Percent From Clay Shirky’s blog: “The fight over MOOCs is really about the story we tell ourselves about higher education: what it is, who it’s for, how it’s delivered, who delivers it. The most widely told story about college focuses obsessively on elite schools and answers a crazy mix of questions: How will we teach complex thinking and skills? How will we turn adolescents into well-rounded members of the middle class? “That’s because in the US, an undergraduate education used to be an option, one way to get into the middle class. Fifteen years ago, a research group called The Fraunhofer Institute announced a new digital format for compressing movie files. Read more at: www.shirky.com

Why I Let My Students Cheat On Their Exam by Peter Nonacs| On test day for my Behavioral Ecology class at UCLA, I walked into the classroom bearing an impossibly difficult exam. Rather than being neatly arranged in alternate rows with pen or pencil in hand, my students sat in one tight group, with notes and books and laptops open and available. They were poised to share each other’s thoughts and to copy the best answers. As I distributed the tests, the students began to talk and write. All of this would normally be called cheating. Who in their right mind would condone and encourage cheating among UCLA juniors and seniors? Animals and their behavior have been my passions since my Kentucky boyhood, and I strive to nurture this love for nature in my students. Nevertheless, I’m a realist. Much of evolution and natural selection can be summarized in three short words: “Life is games.” So last quarter I had an intriguing thought while preparing my Game Theory lectures. Gasps filled the room. “None,” I replied.

What we SHOULD have been taught in our senior year of high school All artwork and content on this site is Copyright © 2015 Matthew Inman. Please don't steal. TheOatmeal.com was lovingly built using CakePHP All artwork and content on this site is Copyright © 2015 Matthew Inman. TheOatmeal.com was lovingly built using CakePHP Critical Thinking in Everyday Life: 9 Strategies Most of us are not what we could be. We are less. We have great capacity. But most of it is dormant; most is undeveloped. Improvement in thinking is like improvement in basketball, in ballet, or in playing the saxophone. It is unlikely to take place in the absence of a conscious commitment to learn. Development in thinking requires a gradual process requiring plateaus of learning and just plain hard work. How, then, can we develop as critical thinkers? First, we must understand that there are stages required for development as a critical thinker: We develop through these stages if we: In this article, we will explain 9 strategies that any motivated person can use to develop as a thinker. There is nothing magical about our ideas. First Strategy: Use “Wasted” Time. The key is that the time is “gone” even though, if we had thought about it and considered our options, we would never have deliberately spent our time in the way we did. When did I do my worst thinking today? Go to top

White Parents Outraged by Course That Teaches Students About Systematic Racism In yet another attempt to pretend as if systemic racism does not exist, white parents of children attending a high school within the Delavan-Darien School District in Wisconsin are outraged by a course that teaches their children that minorities had been historically oppressed by white people. One parent, who wishes to remain anonymous, said the course teaches her child to feel guilty. “It’s meant to divide and victimize non-whites and condition whites to feel guilty and to be more passive,” the parent said. The Delavan-Darien School District superintendent Robert Crist, received a slew of complaints from parents about the course, which entailed an assignment that had students go to the local WalMart and count the number of dolls representative of blacks versus whites. Young America’s Foundation, which also overlooked the curriculum with the parent, called the course race-baiting. The parent believes Jensen’s ideology is politically driven.

d.school: Institute of Design at Stanford Why Nikola Tesla was the greatest geek who ever lived Additional notes from the author: If you want to learn more about Tesla, I highly recommend reading Tesla: Man Out of Time Also, this Badass of the week by Ben Thompson is what originally inspired me to write a comic about Tesla. Ben's also got a book out which is packed full of awesome. There's an old movie from the 80s on Netflix Instant Queue right now about Tesla: The Secret of Nikola Tesla. It's corny and full of bad acting, but it paints a fairly accurate depiction of his life.

Nabokov on Inspiration and the Six Short Stories Everyone Should Read by Maria Popova “A prefatory glow, not unlike some benign variety of the aura before an epileptic attack, is something the artist learns to perceive very early in life.” “Show up, show up, show up,” Isabel Allende advised, “and after a while the muse shows up, too.” That’s precisely what Vladimir Nabokov addresses in an essay titled “Inspiration,” a fine addition to famous writers’ collected wisdom on writing, originally published in the Saturday Review on November 20, 1972, and found in Strong Opinions (public library) — the same fantastic volume that gave us the author’s rare BBC interview on literature and life. He begins with several dictionary definitions of the elusive grab-bag term: Writing three decades after Rosamund Harding’s Anatomy of Inspiration and just eight years after Arthur Koetler’s cult-classic The Creative Act, Nabokov addresses the dismissive attitude many “serious” writers take toward the notion of inspiration — an attitude that E. Thanks, Natascha Donating = Loving

Home | The Creativity Post The 10 habits of highly creative people, applied to creative companies « Marketing Babylon The book Creativity : Flow and the Psychology of Discovery and Invention (previously titled: Creativity: The Work and Lives of 91 Eminent People) contains an exploration of the common personality traits of creative people. The traits are articulated as a series of ten paradoxes. Before listing them, he writes: Of all human activities, creativity comes closest to providing the fulfillment we all hope to get in our lives. Call it full-blast living. You’ve got to love the man, I’m sure he’d be against speculative work and 6-way creative pitches. The list itself is delightful on its own, and will feel intuitively familiar to anyone who has an appreciation for creativity and creative people. So here are Csikszentmihalyi’s Ten paradoxical traits of the creative personality, translated to the the traits of creative companies. 1. Creative companies balance a great capacity for doing and action with time for focus, reflection and a healthy work-life balance. 2. 3. 4. 5. 6. 7. 8. 9. 10.