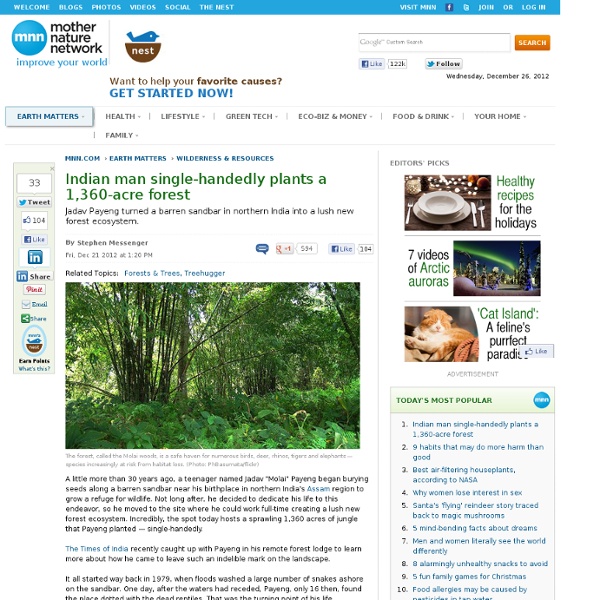 A little more than 30 years ago, a teenager named Jadav "Molai" Payeng began burying seeds along a barren sandbar near his birthplace in northern India's Assam region to grow a refuge for wildlife. Not long after, he decided to dedicate his life to this endeavor, so he moved to the site so he could work full-time creating a lush new forest ecosystem. Incredibly, the spot today hosts a sprawling 1,360 acres of jungle that Payeng planted — single-handedly. The Times of India recently caught up with Payeng in his remote forest lodge to learn more about how he came to leave such an indelible mark on the landscape. It all started way back in 1979, when floods washed a large number of snakes ashore on the sandbar. "The snakes died in the heat, without any tree cover. While it's taken years for Payeng's remarkable dedication to planting to receive some well-deserved recognition internationally, it didn't take long for wildlife in the region to benefit from the manufactured forest.

A New Dawn 13th Jun 2013; 13:00 Listen to the audio (full recording including audience Q&A) Please right-click link and choose "Save Link As..." to download audio file onto your computer. There will an edited high-res video version of the talk available in a couple of weeks time, and if you subscribe to our channel on YouTube - you'll get automatically notified whenever there's a new video. RSA Thursdays Award-winning Hollywood film producer Simon Lewis’ life was turned upside down when a serious car accident left him severely injured. In a special talk at the RSA, Simon Lewis shares his remarkable personal story of recovery, and explores what he sees as society’s most urgent problem - the many threats to learning and consciousness - revealing what is already possible to nurture minds and change lives. Speaker: Simon Lewis, film and television producer and author of Rise and Shine Chair: Dr Suzy Walton, RSA Trustee

The future of education eliminates the classroom, because the world is your class Hypercities (credit: UCLA et at.) Technology can turn our entire lives into learning experiences via “socialstructed learning,” an aggregation of microlearning experiences drawn from a rich ecology of content and driven not by grades but by social and intrinsic rewards, suggests Marina Gorbis, Executive Director at the Institute for the Future, in Fast Company. “Today’s obsession with MOOCs is a reminder of the old forecasting paradigm: In the early stages of technology introduction we try to fit new technologies into existing social structures in ways that have become familiar to us,” she says. What if we could access historical, artistic, demographic, environmental, architectural, and other kinds of information embedded in the real world via augmented reality devices? “This is exactly what a project from USC and UCLA called HyperCities is doing: layering historical information on the actual city terrain.

How to establish a Farm to School program Two north Atlanta moms hit on a great idea while standing at a neighborhood school bus stop. While waiting for their children to come home from classes one afternoon last year, Elizabeth Davis and Angela Renals discovered they had several mutual interests: environmentalism, healthy eating and growing their own food. That’s when Davis suggested they attend an inaugural county-wide Farm to School meeting. Chesnut Charter Elementary School hasn’t been the same ever since. It’s been less than a year but Chesnut now has a Farm to School program that includes an organic vegetable garden, a start on a small orchard, visits from farmers and a monthly, locally grown fruit or vegetable day. The school also recently won a grant to help fund the program. Part of a trend Similar programs have been established at 9,807 schools in 2,305 school districts in all 50 states, according to the Farm to School network website. Farm to School genesis Modifying children’s eating Pull the junk food Curriculum Cafeteria

Queen's 'We Are The Champions' is the catchiest song ever, say scientists September 30, 2011 14:59 Band's classic beats out Sum 41 and the Village People to top the list Queen's 'We Are The Champions' has been found to be the catchiest song ever written, according to new scientific research. Scientists at Goldsmiths University conducted new research into what makes a song memorable and compiled a list of the ten "catchiest" songs of all time, reports the Press Association. In order to get the results, they observed thousands of volunteers singing a selected list of tracks. During the court of the research, they discovered that sing-along songs contained four key elements: Long and detailed musical phrases, multiple pitch changes in a song's 'hook', male vocalists, and higher male voices making a noticeable vocal effort. Using this formula, the scientists found that 'We Are The Champions' was the track most were able to sing along to. Music psychologist Dr Daniel Mullensiefen said of the results:

Scientists Warn of Low-Dose Risks of Chemical Exposure Since before the publication of Rachel Carson’s Silent Spring 50 years ago, scientists have known that certain synthetic chemicals can interfere with the hormones that regulate the body’s most vital systems. Evidence of the health impacts of so-called endocrine-disrupting chemicals grew from the 1960s to the 1990s. With the 1996 publication of Our Stolen Future by Theo Colborn, Dianne Dumanoski, and J. Peterson Myers, many people heard for the first time how such exposures — from industrial pollution, pesticides, and contact with finished consumer products, such as plastics — were affecting people and wildlife. In 2009, the American Medical Association called for reduced exposure to endocrine- disrupting chemicals. Last week, 12 scientists – including such experts as Colborn and the University of Missouri’s Frederick vom Saal — published a paper that they say significantly advances the debate. Not all experts in biology and toxicology agree with the study’s conclusions.