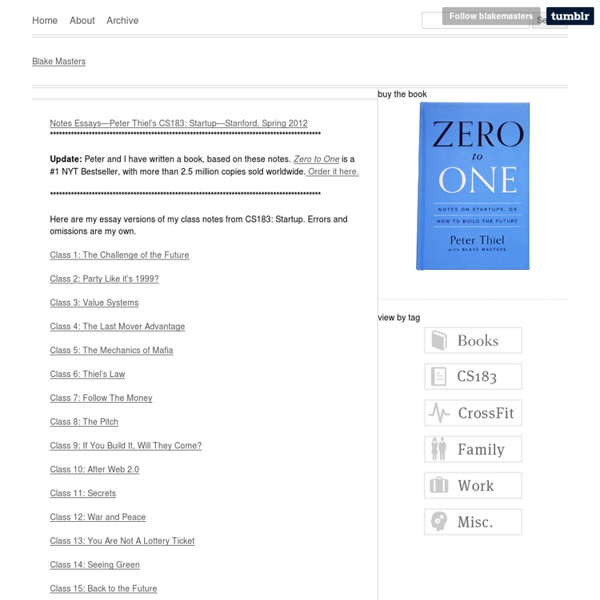 Blake Masters Notes Essays—Peter Thiel’s CS183: Startup—Stanford, Spring 2012 Update: Peter and I have written a book, based on these notes. Here are my essay versions of my class notes from CS183: Startup. Class 1: The Challenge of the Future Class 2: Party Like it’s 1999? Class 3: Value Systems Class 4: The Last Mover Advantage Class 5: The Mechanics of Mafia Class 6: Thiel’s Law Class 7: Follow The Money Class 8: The Pitch Class 9: If You Build It, Will They Come? Class 10: After Web 2.0 Class 11: Secrets Class 12: War and Peace Class 13: You Are Not A Lottery Ticket Class 14: Seeing Green Class 15: Back to the Future Class 16: Decoding Ourselves Class 17: Deep Thought Class 18: Founder as Victim, Founder as God Class 19: Stagnation or Singularity? buy the book view by tag Powered by Tumblr.

How I built 7books in under 4 weeks | 7books blog Update: This post is slightly out of date now since V2 of 7books is now live. See the "making of" post for V2 here: Let me tell you a story. It's a story of my very first coding project, called 7books. Are you sitting comfortably? Then I'll begin. Why I built 7books I've had plenty of ideas in my time. I quickly scribbled in my moleskine this diagram: As you can see, originally I was planning on calling the site 10books and I was planning on using some Ajax magic. Still, as I sat on the train thinking through the idea I started to become very attached to it. It's based on one of my passions (I love books a lot)I didn't think it would be too difficult to buildIf I wanted to use the service then it was a sure bet others would too Underneath my diagram I jotted down what I thought the three main USPs would be: Now, given it's still early days I've not yet got all 3 of these USPs nailed but that's the vision. Me, 4 weeks ago Four weeks ago I couldn't code. Phew.

How Three Germans Are Cloning the Web A purple rooster sculpture made from recycled grape Fanta bottle labels. Clocks designed to hang in corners. Bauhaus posters from the 1920s. Hand-painted vintage typewriters. These are some of the carefully curated objects for sale on Fab.com, the fast-growing flash-deal site for designer goods. Six months after Fab launched, it was knocked off. Fab vs. Bamarang is the creation of Oliver, Marc, and Alexander Samwer, a trio of German brothers who have a wildly successful business model: Find a promising Internet business, in the U.S., and clone it internationally. The Samwers’ base of operations is a startup accelerator in Berlin called Rocket Internet. Groupon (GRPN) got cloned by the Samwers two years ago, and the results were expensive for the daily-deal site. The Samwers are revered for putting Berlin’s startup scene on the map and despised for sticking Germany with a reputation as the copycat capital of Europe. EBay’s business model appealed to them from the start.

How to make Angry Birds – part 1 Hello and welcome back to my blog! This time I’m going to try something new. There are many tutorials for various techniques and tricks on the web, but what you don’t often see is one that takes you through the development of a game, step by step from start to finish. This is what I’m going to attempt here. I’m going to assume the reader is familiar with the basics of game development and I’m going to concentrate on the art and programming. Angry Birds So, the game I’m going to be making is to be based on the extremely popular Angry Birds by Rovio, a AAA title which cost some $140k USD to make. Angry Birds Obviously, since its just me making this I will have to take a few short-cuts and will be concentrating on the core part of the game. Cloning Before I start I should mention that I do not condone the cloning of games in any way; what I’m doing in these tutorials is purely for educational purposes and I have no plans to release the game at the end of this. Analysis Graphics Code Camera Physics

How to hire a programmer to make your ideas happen Do you have an idea for a website, online business, or application, but need a programmer to turn that idea into reality? Many of my friends have been in the same position, so here's my best advice, below. But first, a quick request: If you are a programmer, please leave a reply below with YOUR best advice. Feel free to include your URL and email for anyone to contact you. I know my advice is not complete, (and you may totally disagree!) 1. First read my short “Version Infinity” article. Dream the big dream of everything your site/service/company might be some day, and write it all down. But then think of the bare minimum that would make you happy, and people would find useful. Call this Version 1.0. A programmer is much more likely to say, “I can do that!” Your goal here is just to get Version 1.0 built. 2. Again, remember: only describe Version 1.0. Leave off all details that the programmer doesn't need to know. Be succinct. Include people in a story, using the terms you use. 3. 4. 5. 6.

A Conversation with Peter Thiel Francis Fukuyama: I’d like to begin by asking you about a point you made about there being certain liberal and conservative blind spots about America. What did you mean by that? Peter Thiel: On the surface, one of the debates we have is that people on the Left, especially the Occupy Wall Street movement, focus on income and wealth inequality issues—the 99 percent versus the 1 percent. It’s evident that both forms of inequality have escalated at a very high rate. Probably from 1973 to today, they have gone up faster than they did in the 19th century. In the history of the modern world, inequality has only been ended through communist revolution, war or deflationary economic collapse. Francis Fukuyama: And it will require countless environmental permits, litigation, and so on. Peter Thiel: Yes. In some ways these two debates, though they seem very different, ought to be seen as two sides of the same coin. There has been a tremendous slowdown everywhere else, however.

4c - Four Cups - The Need for Speed Your scarcest resource as a lean startup is undoubtably time. There's never enough of it. Sure, you could raise more, but that won't help you against your competitor who seems to have found his market fit while you were charming an investor. Over the last year I have become obsessed with speed and efficiency of every aspect of product development: Continuous deployment, build environments, and other basic processes on day one will make your team more efficient everyday and help you execute harder, better, faster on day two -- see this post on the Raddd process I implemented at Pipewise. Another big driver for speed is making sure to have the right tools and technologies for job at hand. My most recent discovery here is the much blogged about Responsive Design, but it seems useful to also go over some of the other ones and why we at Peek are using them for our technology stack. Ruby on Rails MongoDB and NoSQL Sass, CoffeeScript, and OOCSS The web is built on CSS and Javascript. Final Note

Racism And Meritocracy Editor’s note: Guest contributor Eric Ries is the author of The Lean Startup. Follow him @ericries. Unless you’ve been living under a rock, you can’t have missed the recent dust-up over race and Silicon Valley. Like almost every discussion of diversity and meritocracy in this town, it turned ugly fast. One side says: “All I see is white men. I’d like to say a few words about this, but I want to do so under special ground rules. I want to make an argument, step by step, that I hope will convince you to care about this issue, but that doesn’t presuppose that you already agree that diversity is important. So the rules are: No political correctness. So – no hippies, no whiners, no name-calling, and no BS. What accounts for the decidedly non-diverse results in places like Silicon Valley? The problem with both of these theories is that the math just doesn’t work. It’s a fact that the applicant pool to most Silicon Valley startup schools and VCs is skewed. And there’s good news here.