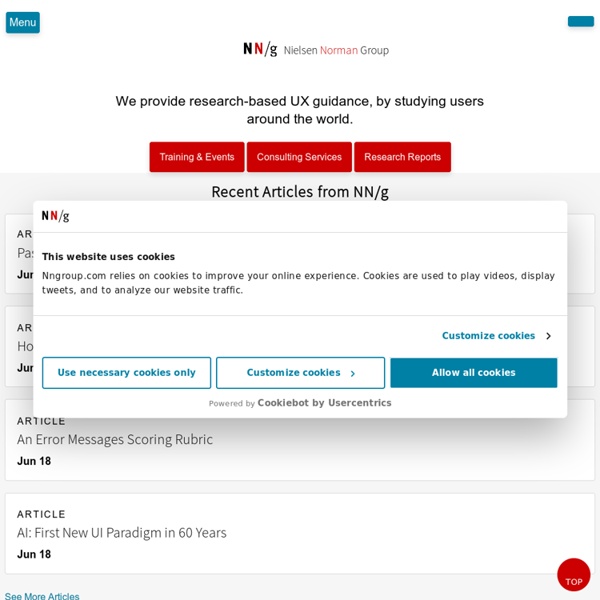 The Best Place for Error Messages on Forms Where are you placing the error messages on your form? If they’re not placed where users expect to see them, you could jeopardize their capability to complete your form. When users make mistakes, they need to understand what those mistakes are so they can correct them and re-submit the form. They want to complete your form, but if doing so takes too much effort they’ll change their minds. Top of Form Validation Vs. Lost to the Ages « Few are chosen. Fewer succeed. Journey now to an island world surrealistically tinged with mystery … where every vibrant rock, scrap of paper, and sound may hold vital clues to your unraveling a chilling tale of intrigue and injustice that defies all boundaries of time and space. Only your wits and imagination will serve to stay the course and unlock the ancient betrayal of ages past. You are standing on a dock beside the jutting masts and crow’s nest of a sunken ship, water lapping calmly under your feet.

Intranet Focus » Blog There are a small number of people in any area of endeavour who become recognised as builders of fundamental frameworks that stand the test of time and become the accepted way of managing complex problems. Notable examples include John Zachman for enterprise information architecture, Edgar Codd for relational databases and Murray Gell-Mann for elementary particles. Jane McConnell, of NetStrategy/JMC, deserves to be added to that list for her work on digital workplaces. Jane has just released the latest edition in her eight year series of reports that started out with surveying intranet progress and now provide an unmatched level of analysis into the development of digital workplaces. The change in the title this year to Digital Workplaces in the Connected Organisation is one to take note of.

The User Experience Wheel I have used this model for some time now, time to reveal it to the critical eyes of fellow practitioners. It is a model that tries to explain “what is user experience?” PDF Version The Model should be explained from the inside. It starts in the middle. Value is what we want to accomplishFor customers and providers, positive user experience is a win-win situationWe want to accomplish value through positive user experienceThe user experience is a series of phases, we have to focus on positivity in findability, accessibility, desirability, usability, credibility and usefulnessNumerous factors contribute to the phases of user experience, the model shows 30 factors carefully placedTo achieve this we work backwards, starting and ending with search engine strategy, and going through and making a choice about each of the factors I feel the model still is a work in progress.

agile Archives SD Times Editor’s Blog: Agile 2018… Outcomes vs. output The Agile 2018 conference is wrapping up in San Diego today, and for once the conversation wasn’t focused around enterprise Agile and scaling Agile. Of course, those are still important topics to many businesses, but by now the industry has had 20 years to figure out the process and they are ready to take the … continue reading Agile 2018: The Business Agility Report, the Professional Scrum Master II training course, Scrum@Scale, and Zoho Sprints Despite Agile’s wide adoption, businesses are still struggling to adopt the mindset, structure and practice of the software development approach. Agile Transformation and the Business Agility Institute announced the first Business Agility Report at the Agile 2018 conference in San Diego this week, which found a majority of organizations still rate their business agility maturity … continue reading

Civilization V Analyst: Beyond Earth *This page last updated: 15 July, 2014 10:45 PST. (Log of recent changes) Disclaimer: The information listed below represents pre-release information on a game under development, and so may be incomplete and subject to change. On April 12, 2014 2K announced a new title in the Civilization series: "Sid Meier's Civilization: Beyond Earth." It is a standalone game using the Civ V engine that takes place on a new extrasolar colony, in a similar vein to 1999's Sid Meier's Alpha Centauri. It is scheduled for a worldwide release October 24, 2014 with a suggested retail price of USD $49.99.

- Intranet & Digital Workplace Strategies - NetJMC World Cafe in Berlin: The Digital Workplace Journey April 8, 2014 If you are in Berlin between end of day Wed 9 April and Fri evening 11 April, get in touch. I’m going there tomorrow for Intranet Reloaded. I’ll be running one table at the World Café on “evolving towards a digital workplace”. I plan to use my new model and deepen the work I did in Copenhagen at IntraTeamEvent and in Paris at IntraNetwork on “obstacles and how to overcome them”. Gaming the system Gaming the system (also referred to as gaming the rules, bending the rules, abusing the system, cheating the system, milking the system, playing the system, or working the system) can be defined as using the rules and procedures meant to protect a system in order, instead, to manipulate the system for a desired outcome.[1] According to James Rieley, the American banker, structures in companies and organizations (both explicit and implicit policies and procedures, stated goals, and mental models) drive behaviors that are detrimental to long-term organizational success and stifle competition.[2] For some,[who?] error is the essence of gaming the system, in which a gap in protocol allows for errant practices that lead to unintended results.[3]