100 Vim commands every programmer should know 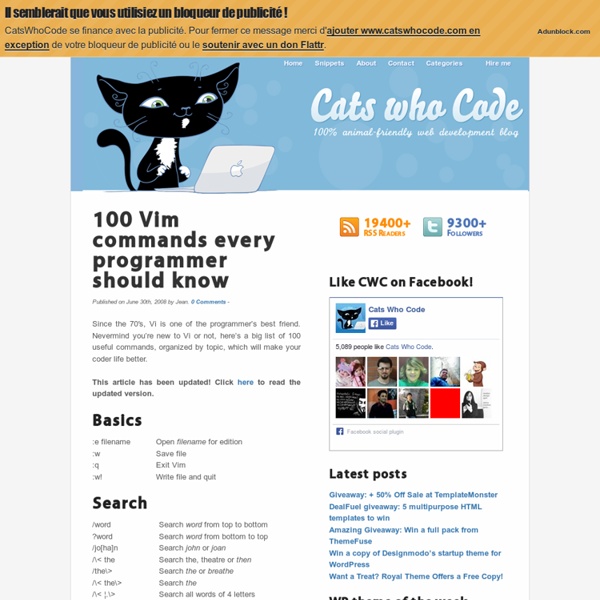 The Best Linux Applications of 2013 2013 – What A Year, Right? This time last year we knew nothing of Ubuntu Touch; Canonical attempting to raise $32 million for a cutting-edge smartphone would’ve sounded insane; Mir was a space station while Wayland was the future; and as far as Saucy Salamanders and Trusty Tahrs are concerned, they were nothing but adjunct words on the pages of untroubled thesaurus. It’s been a busy year. Canonical continue to stride forwards towards a converged future for the OS, while an estimated 25 million people continue to use the regular desktop version for their day-to-day computing needs. But key to both experiences are apps. Last year we rounded up 10 of our favourite apps that debuted on the desktop.

prog21: Want to Write a Compiler? Just Read These Two Papers. Imagine you don't know anything about programming, and you want learn how to do it. You take a look at Amazon.com, and there's a highly recommended set of books by Knute or something with a promising title, The Art of Computer Programming, so you buy them. Now imagine that it's more than just a poor choice, but that all the books on programming are at written at that level. That's the situation with books about writing compilers.

A quick tour of relational database access with Scala Update: Added Squeryl, thanks to @JoeZulli for the heads-upUpdate 2: Added link to latest Squeryl release for Scala 2.10 and 2.9.2 I recently started working with relational databases again from within Scala, after a while in JSON-land (mostly MongoDB and elasticsearch). During that time, I’d been happily working with lightweight libraries / DSLs that take care of case class serialization, such as the impeccable Salat and elastic4s. So I started looking for a tool that would let me achieve the following: The trouble seems to be that just like for JSON libraries or HTTP Client libraries, it seems to be quite fashionable in Scala-land to roll your own Scala library for relational database access, each of those implementations having their own set of advantages and disadvantages.

21 Excellent Open Source Linux Text Editors A text editor is software used for editing plain text files. It has many different uses such as modifying system configuration files, writing programming language source code, jotting down thoughts, or even making a grocery list. Whatever the level of sophistication of the editor, they typically have a common set of functionality, such as searching/replacing text, formatting text, undo/redo, importing files, as well as moving text within the file. However, many of the editors included in this article are feature-rich, and can be further extended using plugins and libraries. We previously published an article on the best open source editors in 2008. Given the length of time that has elapsed, and the new projects that have come forward, it's prudent to update the article.

5 App Prototyping Tips for Project Managers Conservative estimates are placing the app market at 25 billion dollars, but as industries begin to build out digital and find new ways to engage with customers, this number is bound to explode. So, how can a design and development agency make the most of that money to help better serve their clients? By better applications at a faster pace. Here at Koombea, an international web and mobile design and development agency, our project managers have put together five tips for success for your next digital project.

Datavu: Useful Unix commands for exploring data While dealing with big genetic data sets I often got stuck with limitation of programming languages in terms of reading big files. Also sometimes it is not convenient to load the data file in Python or R in order to perform few basic checks and exploratory analysis. Unix commands are pretty handy in these scenarios and often takes significantly less time in execution. Lets consider movie data set from some parallel universe (with random values) for this assignment. Becoming A Real Programmer (thinking about thinking...) [ LUPG Home ] [ Tutorials ] [ Related Material ] [ Essays ] [ Project Ideas ] [ Send Comments ] v1.0.0 Table Of Contents So you want to become a programmer. an independent programmer, that is not dependent on specific people to hold their hand, that can design a project and lead its development. A real programmer. Assuming that's what you want to become, and assuming you're not there yet - how do you go about doing that?