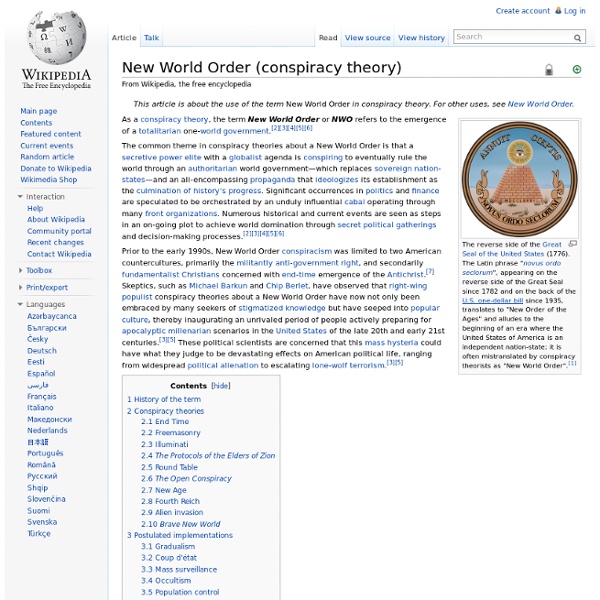 8 Government Conspiracy Theories (And How They Could Be Right) Grab your tinfoil hats. It’s time to get paranoid. Conspiracy #1: The government is trying to control my mind. The Truth: The government has invested millions in mind control technologies. Who doesn’t want a telepathic ray gun? In 2002, the Air Force Research laboratory patented a similar microwave device. The mind games don’t stop there. “Can we get control of an individual to the point where he will do our bidding against his will and even against fundamental laws of nature, such as self-preservation?” In April 1953, the CIA decided to find out. That lack of test subjects drove the CIA to wander off the ethical deep-end, leading the Agency to experiment on unwitting Americans. About 80 institutions—44 of them colleges—housed MKUltra labs. The CIA tried its hand at erasing people’s memories, too. In the wake of the Watergate scandal, the CIA destroyed hundreds of thousands of MKUltra documents. Conspiracy #2: The government is poisoning me. Library of Congress Wikimedia Commons Getty Images

Mark of the Beast : Obama's Healthcare Mandate Mar 2013-Dec 2017 RFID in Right Hand (Aug 28, 2012) The Fluoride Conspiracy "Tell a lie loud enough and long enough and people will believe it." - Adolf Hitler "Fluoridation is the greatest case of scientific fraud of this century." - Robert Carlton, Ph.D, former EPA scientist, 1992 The history of forcing fluoride on humans through the fluoridation of drinking water is wrought with lies, greed and deception. Governments that add fluoride to drinking water supplies insist that it is safe, beneficial and necessary, however, scientific evidence shows that fluoride is not safe to ingest and areas that fluoridate their drinking water supplies have higher rates of cavities, cancer, dental fluorosis, osteoporosis and other health problems. At the end of World War II, the US government sent Charles Eliot Perkins, a research worker in chemistry, biochemistry, physiology and pathology, to take charge of the vast Farben chemical plants in Germany. During the Cold War, Dr.

U.N. Chief: ‘Global Governance' Solution for Problematic 'National Interests' on 26th June 2020 @ 11.00pm © press U.N. Secretary-General Antonio Guterres said the world is need of an overarching level of multilateral governance that can sideline problematic “national interests." As the world body commemorates the 75th anniversary of the adoption of the U.N. “We need a networked multilateralism, bringing together the U.N. system, regional organizations, international financial institutions, and others," he said. "And we need an inclusive multilateralism, drawing on the indispensable contributions of civil society, business, cities, regions and, in particular, with greater weight given to the voices of youth,” Guterres said during a virtual press conference. Guterres claimed governments are no longer the only political and power reality in the 21st century. Have your say - ⇓ Hit the comments below ⇓ "We need an effective multilateralism that can function as an instrument of global governance where it is needed," Guterres stated.

Big Brother Is Watching - A Corporate License to Kill - Conspiracies on truTV Most frightening of all is that this secret group of informants has been given a license to kill. Rothschild's whistleblower informed him that he “was at a meeting where there was an FBI member and a Homeland Security member telling him and the other business people in the room that there’s gonna be martial law in the United States. Not if, but when, and when martial law comes down the pike, it’s the responsibility of the business owners to protect their little corner of the infrastructure and that they have the right to use lethal force to protect [it].” George W. InfraGard is nothing less than a secret, quasi-governmental organization made up of your friends and neighbors who have a direct line to the FBI, access to secret information and privileges, and the government-given right to exercise lethal force with little fear of reprisal. A country depends on its average citizens to right the ship of state when it begins to pitch.

North American Union Map showing the theoretical union located in the world map. Some form of union has been discussed or proposed in academic, business, and political circles for decades.[1][2][3][4] However, government officials from all three nations say there are no plans to create a North American Union and that no agreement to do so has been signed.[5][6][7] The formation of a North American Union has been the subject of various conspiracy theories.[8][9][10][11] History[edit] Since at least the mid-19th century, numerous concepts for a union among Canada, Mexico and the United States, some including Caribbean, Central American and South American countries, have been proposed, such as the North American Technate. Later, amid a push for greater integration and concerns about the impact of heightened security on trade relations following the September 11 attacks in 2001, an effort was organized in 2003 by the Canadian Council of Chief Executives, U.S. Claims of implementation[edit] Features[edit]

James Corbett: "The Great Reset Is The New World Order!" - We're Almost Out Of Time The Great Reset to the New World Order is almost here. We are just about out of time. Wake up now, while you still can! Most readers already understand what’s going on and that this entire system that’s an illusion is being taken down so they can erect the New World Order prison around us. If you haven’t figured out that the government (all of them) is in on this; you are not awake. James Corbett recently discussed The Great Reset to a New World Order system of totalitarian enslavement with Spiro Skouras. Trending: CDC & Fauci Confirm COVID-19 Scamdemic Was A Hoax “The Great Reset is nothing more than the New World Order,” says Corbett who has been speaking out against slavery (including the enslavement of government) for decades. I agree with Corbett. Everything done to us has all been to manipulate us into believing we need a ruler and a ruling class to dictate our lives. Manipulating The Masses: Edward Bernays &; Why The System Needs Your Compliance “This is it.

Jinn Imam Ali Conquers Jinn Unknown artist Ahsan-ol-Kobar 1568 Golestan Palace. Together, the jinn, humans and angels make up the three sapient creations of God. Like human beings, the jinn can be good, evil, or neutrally benevolent and hence have free will like humans and unlike angels.[3] Etymology and definitions[edit] Jinn is a noun of the collective number in Arabic literally meaning "hidden from sight", and it derives from the Arabic root j-n-n (pronounced: jann/ junn جَنّ / جُنّ) meaning "to hide" or "be hidden". In Arabic, the word jinn is in the collective number, translated in English as plural (e.g., "several genies"); jinnī is in the singulative number, used to refer to one individual, which is translated by the singular in English (e.g., "one genie"). In the pre-Islamic era[edit] Inscriptions found in Northwestern Arabia seem to indicate the worship of jinn, or at least their tributary status, hundreds of years before Islam. In Islam[edit] Classifications and characteristics[edit]

HAARP "It isn't just conspiracy theorists who are concerned about HAARP. The European Union called the project a global concern and passed a resolution calling for more information on its health and environmental risks. Despite those concerns, officials at HAARP insist the project is nothing more sinister than a radio science research facility." -- From documentary on HAARP project's weather control by Canada's CBC HAARP: What is it? HAARP array: Gakona, Alaska HAARP (High Frequency Active Auroral Research Program) is a little-known, yet critically important U.S. military defense project which has generated quite a bit of controversy over its alleged weather control capabilities and much more. Though denied by HAARP project officials, some respected researchers allege that secret electromagnetic warfare capabilities of the project are designed to forward the US military's stated goal of achieving full-spectrum dominance by the year 2020. Who Created HAARP? Dr. HAARP Documentaries