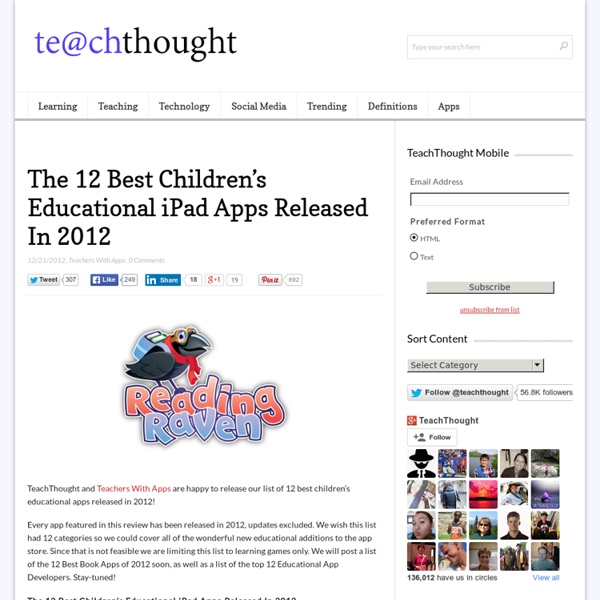 TeachThought and Teachers With Apps are happy to release our list of 12 best children’s educational apps released in 2012! Every app featured in this review has been released in 2012, updates excluded. We wish this list had 12 categories so we could cover all of the wonderful new educational additions to the app store. Since that is not feasible we are limiting this list to learning games only. We will post a list of the 12 Best Book Apps of 2012 soon, as well as a list of the top 12 Educational App Developers. Stay-tuned! The 12 Best Children’s Educational iPad Apps Released In 2012 1. 2. 3. 4. 5. 6. 7. 8. iTooch Junior High School, by edupad Inc., is not only a state of the art and completely comprehensive educational app, it is exciting, effective and enormously fun! 9. 10. 11. 12.

The Best Free iPad and iPhone Kids' Apps According to Apple EmailShare 18EmailShare There’s a difference between popular kids’ apps and games that grab the world’s fancy momentarily, and the best kids’ apps and games that become all-time favorites, classics and “must-haves.” So which type of kids’ apps do you seek? Either way, Apple’s got you covered. The 55 Best Free Education Apps For iPad Finding apps isn’t difficult. Finding education apps is only a bit more challenging. Finding free education apps is also possible. Finding free education apps worth downloading is a different story entirely. The following is our list for the 55 best apps for learning we can find. 12 of the Best Ipad 2 Apps for work Here is a compiled list of the 12 of the Best appz for Ipad. This article primarily. focuses on the Ipad, Ipad 2. These 12 apps are generally used in a work environment. We are going to follow up with two more postings of which are the best apps for Ipad creative and another article which Ipad games are the best. Best App for your Todo List: Toodledo

Where Can I Learn More about iPads in Elementary Schools Where Can I Learn More about iPads in Elementary Schools I get asked regularly, besides my writing about our iPad initiative, who else writes about iPads in elementary education. Here are some of the folks I read: Sidwell Friends School (the primary grades iPad initiative at the school the Obama girls attend)Fraser Speirs (Scottish tech integrator. The 17 Best Twitter Hashtags for Education (2012 ) Talking about Twitter brings to mind the power of hashtags. According to Twitter Help Center the symbol #, called hashtag, is used to mark keywords or topics in a tweet. It was created organically by Twitter users as a way to categorize messages. Educational Technology and Mobile Learning has already posted a guide on the use of hashtags in education. Check it out HERE

Let’s Talk About Captions! 21 Aug I’m always looking for ways to help history come alive for my students. The Perfect Captions app is a great way to incorporate technology in your classroom in an engaging way. Students can add captions to demonstrate their understanding of what a fiction character or historical figure might be thinking. They can use a picture found on the Internet, saved on a student’s iPad or taken with their iPad camera.

11 Best Educational Apps for Kids Since my husband got an iPad for work, we’ve found that educational apps are a great learning tool for the kids. Since I’ve only downloaded educational apps, they’re forced to choose an educational option. (Insert evil mom-laughter here –> Ha, ha, ha.) So, without further ado, here are my mom-approved, kid-tested eleven favorite iPad educational apps for elementary-aged kids, not including eBooks.

Opening Doors and Turning On Lights cc licensed ( BY SD ) flickr photo shared by Tsubaki Kaworu I recently got an iPad 2. Well, I should say my wife recently got one that I have claimed as my own. Being an Apple guy myself, I was prepared for most of what it had to offer, but was pleasantly surprised by many features I didn’t expect. As I played I found that the iPad, in combination with Google Apps, the iOS5 software upgrade, Dropbox, and Diigo, served MANY purposes for me as a classroom teacher, and it got me thinking…

The Practical Side of Using iPads in the Classroom This is my first year with iPads in my classroom. I had used the device before at home, but have to admit that even though I was excited and ready to use it in my classroom, I wasn't sure where to begin. As I have talked to teachers at different schools, I have found that I am not alone. Best Inventions of the Year 2012 That’s not Photoshop. The Dutch artist Berndnaut Smilde has developed a way to create a small, perfect white cloud in the middle of a room. It requires meticulous planning: the temperature, humidity and lighting all have to be just so. Once everything is ready, Smilde summons the cloud out of the air using a fog machine.