Back to Basics: Learn to Use Keyboard Shortcuts Like a Ninja 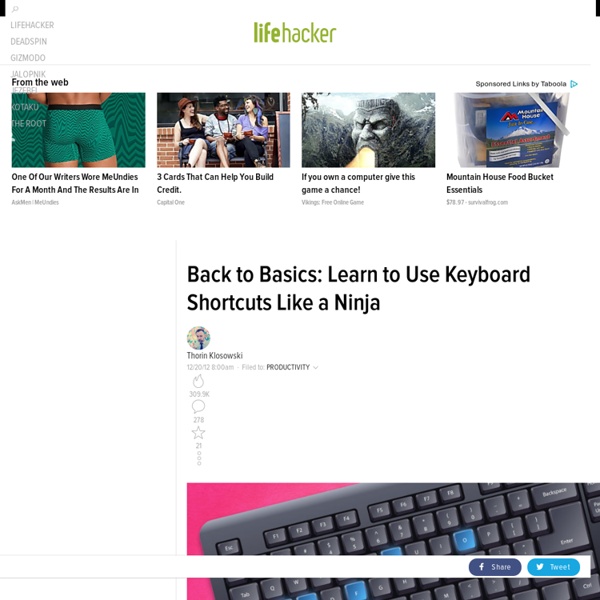 Logitech K310 – A Keyboard You Can Take For A Wash Friday, September 7 2012 Playing your favorite games or browsing the web while eating Doritos – it can get messy. It's hard to snack and surf without leaving crumbles all over your keyboard and ending with oily keys, but Logitech thought about that and came up with a washable keyboard – the K310. Now after every Doritos session, take your keyboard for a soak and voilà! Drainage holes will make drying easy and the laser printed, UV coated keys won't fade. 3D Print Your Invention: Learn 3D Modeling and Digital Fabrication 3D printing is exciting and new and awesome. You may have wanted to try your hand at 3D printing, but it can be hard to know where to start. This class will teach you how to jump in, create your own 3D models, and ultimately print your designs to hold in your own hands. Your first 3D print is ridiculously fun. If you could make exactly what you’ve imagined, what would it be? Inexpensively prototype the invention you’ve been dreaming up.Design your own wedding ring in silver or titanium.Build a new lamp for your house.Print your own custom, ceramic coffee cup. Who Should Take This Class? This class is for beginners, with no experience required. We will take a unique approach to learning: building up, cutting down, and manipulating your 3D model -- much like building with clay in art class. Win $100 and go nuts! On January 31, three students will each win $100 of 3D printing credit. This class is designed to give you a complete “3D printing startup package.” Cheers, -Lance

Pressing This Button Will Find Tweetable Sentences In Anything On The Web "Sharing. It’s hard work," writes Paul Ford on his cheekily named website SavePublishing.com. Don’t we know it: Any digital publication worth its salt has at least one full-time staffer devoted to picking and choosing and curating and sharing the most clickable snippets of its content for the hordes on Twitter, Facebook, and Google+. (Okay, not that last one. That’s what Ford has created: The SavePublishing bookmarklet, when clicked, greys out everything in an article except for the passages that are pithy enough for the Twitterati. "I doubt it," Ford admits. Ford hacked the tool together in about week (spread over several months, he says), and it’s not exactly the HAL 9000 of social media: It decides what sentences are "tweetable" by checking their length, and nothing more. As a piece of interactive satire, SavePublishing is smarter than it seems. In other words, they want to grab the best part of the content and share that, not just the headline. [Image: Hands via Shutterstock]

KeyRocket - A simple way to master keyboard shortcuts. Quick Example Sally installs KeyRocket and starts using Word. KeyRocket notices that Sally habitually uses the mouse to center align her text and suggests that she use a shortcut instead (in this case, Ctrl + E). Not Your Dad’s Office Assistant From the moment you finish installation, it starts learning how you work. Constantly Learning KeyRocket is always learning – constantly recalibrating its recommendations based on your current level of knowledge. Teaches What You Need to Know KeyRocket’s teaching algorithms and user interface were developed through research at one of Germany’s top universities. Sounds simple enough, but it’s taken years of research and development to create software that adjusts to your unique learning and working style.

fullstackio/FlappySwift Five Best Desktop Keyboards Huh - you lead with a photo of a BBC Micro keyboard and don't even mention it in the article? What gives? What's with people not reading the small print? "The Hive Five is based on reader nominations. Oh yeah. They say it like four times all over the article. "This week we're going to look at five of the best keyboards, based on your nominations." " Well, we asked for them, and close to 600 nominations later, you told us what you thought." "Remember, the top five are based on your most popular nominations from the call for contenders thread from earlier in the week." "The Hive Five is based on reader nominations.

Introduction to Mobile Photography: Capturing on the Go Mobile photography was my gateway drug into photography. It is a phenomenon that has made taking amazing photos easier and more accessible than ever. Everyone from your sister to your grandma might be taking mobile photos but there is in fact a technical craft to doing it well that makes the best really stand out. I'll take you through my entire shooting, editing and sharing process - all of which I do with my iPhone - to show how I developed my style & built my Instagram up to 240,000 followers. What You'll Learn Scouting. What You'll Do You'll go to your favorite park or outdoor space and create an image using the techniques you've learned in this class.

A Typeface Where Every Letter Is An Optical Illusion A good illusion is a few different things all at once. Depending on how you look at it, you could say it’s a work of art, a puzzle, or a piece of graphic design (Or an old woman! Or a young woman! The typeface was created by Jacques Le Bailly, a Dutch type designer who works under the pseudonym Baron von Fonthausen (apparently not your typical stuffy aristocrat but rather one of those eccentric noblemen you occasionally read about who were into building secret passageways and joining science cults and stuff like that). At first, Le Bailly tried to base all his letters on a single shape--the rounded rectangle--but he found the results unsatisfactory. Some letters were easy to construct, others were far more complex. As the project developed, Le Bailly spent more time ensuring that the final product would be a cohesive, coherent typeface, rather than simply a collection of loosely related illusions.