MIT discovers a new state of matter, a new kind of magnetism 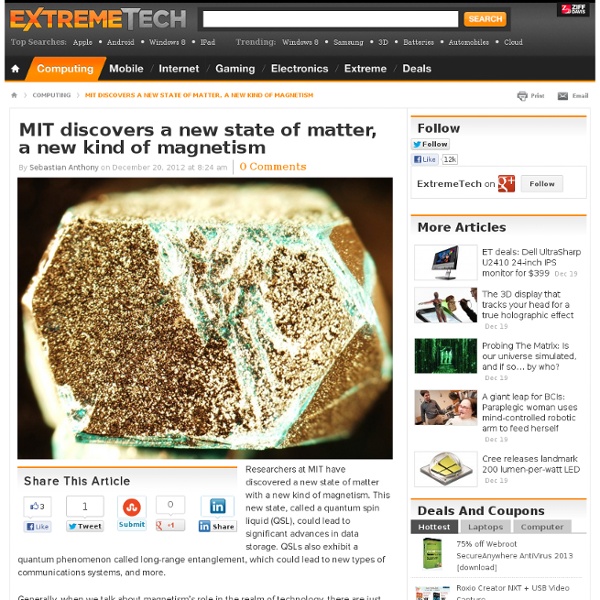 Researchers at MIT have discovered a new state of matter with a new kind of magnetism. This new state, called a quantum spin liquid (QSL), could lead to significant advances in data storage. QSLs also exhibit a quantum phenomenon called long-range entanglement, which could lead to new types of communications systems, and more. Generally, when we talk about magnetism’s role in the realm of technology, there are just two types: Ferromagnetism and antiferromagnetism. In the case of quantum spin liquids, the material is a solid crystal — but the internal magnetic state is constantly in flux. The existence of QSLs has been theorized since 1987, but until now no one has succeeded in actually finding one. Moving forward, Lee says that the discovery of QSLs could lead to advances in data storage (new forms of magnetic storage) and communications (long-range entanglement). Now read: Quantum entangled batteries could be the perfect power source

Single Photon Optics Transmitter Slows the Speed of Light Quantum computers should theoretically be capable of performing certain kinds of complex calculations way faster than normal computers. Quantum-based communication could be impenetrable to eavesdropping. But producing quantum components for real-world devices has turned out to be loaded with discouraging challenges. Now, researchers at MIT and Harvard University have achieved a critical long-term goal of such efforts- the ability to convert a laser beam into a stream of single photons, or particles of light, in a controlled manner. Vladan Vuletić, senior author and MIT Professor of Physics, says the achievement “could enable new quantum devices” for example quantum gates, where a single photon switches the direction of travel or polarization of another photon. Encouraging such interactions necessitates atoms that work together strongly with photons as well as with other atoms that, in turn, can affect other photons. Electromagnetically Induced Transparency References: 1.

Ultrafast Chips that Run on Light: Nanoswitch Breakthrough Brings Us Closer When you think about microprocessors and chipsets and circuit boards, if you’re like me, you think in metaphors: tiny green-and-silver cities comprising dozens of chips — some with billions of transistors — on copper trace-linked highways, channeling information as digital 1′s and o’s through electrical signals on a microscopic scale. For this, I blame Tron. Now — keeping with the yes-I’m-an-’80s-child Tron metaphor — imagine that “city” instead channeling light. (MORE: Netatmo Home Weather Station Kit Brings Out Your Inner Meteorologist) It’s a research dream, to use bursts of light instead of electricity to move computer information around at unheard of speeds. And we’re now a step closer to that dream, thanks to researchers at the University of Pennsylvania, who’ve managed to create the world’s first “all-optical photonic switch” — a switch that’s essentially run on light. How’d the Penn research team create their photonic switch? According to Penn News:

String Theory - The Physics of String-Bending and Other Electric Guitar Techniques Electric guitar playing is ubiquitous in practically all modern music genres. In the hands of an experienced player, electric guitars can sound as expressive and distinct as a human voice. Unlike other more quantised instruments where pitch is a discrete function, guitarists can incorporate micro-tonality and, as a result, vibrato and sting-bending are idiosyncratic hallmarks of a player. Figures Citation: Grimes DR (2014) String Theory - The Physics of String-Bending and Other Electric Guitar Techniques. Editor: Dante R. Received: May 16, 2014; Accepted: June 9, 2014; Published: July 23, 2014 Copyright: © 2014 David Robert Grimes. Data Availability: The authors confirm that all data underlying the findings are fully available without restriction. Funding: The author received no specific funding for this work. Competing interests: The author has declared that no competing interests exist. Introduction Materials and Methods 0.1 String bending (1)where is the length of the vibrating element, . .

Mystery Particle To Make Devices Even Tinier A strange, newly discovered particle could shrink a laptop computer's hard drive to the size of a peanut and an iPod's drive to the size of a rice grain. The particle, called a skyrmion, is more stable and less power-hungry than its conventional, magnetic cousin. Besides storing data in ultra compact media, skyrmions could lead to faster computers that combine storage with processing power and usher in smaller and smaller devices that have the same computing power as a desktop machine. NEWS: Tiny Robotic Compound Eyes Unveiled Kristen von Bergmann and her colleagues, led by Roland Wiesendanger at the University of Hamburg in Germany, report their findings in today's issue of Science. While the name sounds like an evil creature from a fantasy novel – it comes from Tony Skyrme, a British physicist who first theorized the particle's existence in 1962 -- skyrmions are tiny magnetic fields that surround groups of atoms. Magnetic fields are the basis for data storage.

Memristor Leon Chua has more recently argued that the definition could be generalized to cover all forms of two-terminal non-volatile memory devices based on resistance switching effects[2] although some experimental evidence contradicts this claim, since a non-passive nanobattery effect is observable in resistance switching memory.[5] Chua also argued that the memristor is the oldest known circuit element, with its effects predating the resistor, capacitor and inductor.[6] Background[edit] Conceptual symmetries of resistor, capacitor, inductor, and memristor. In his 1971 paper, Chua extrapolated a conceptual symmetry between the nonlinear resistor (voltage vs. current), nonlinear capacitor (voltage vs. charge) and nonlinear inductor (magnetic flux linkage vs. current). He then inferred the possibility of a memristor as another fundamental nonlinear circuit element linking magnetic flux and charge. Memristor definition and criticism[edit] Experimental tests for memristors[edit] Theory[edit] 1808[edit]

Apparent breakthrough in nuclear fusion silenced by shutdown The preamplifiers of the National Ignition Facility are the first step in increasing the energy of laser beams as they make their way toward the target chamber. Lawrence Livermore National Laboratory Scientists have come one step closer to harnessing the power of the sun. Researchers at the National Ignition Facility (NIF) have passed a milestone in achieving self-sustaining nuclear fusion -- but you won't hear about it from the researchers. According to the BBC, a research experiment conducted in late September succeeded in releasing more energy through a fusion reaction than it absorbed by the fuel going in. NIF's method for achieving fusion involves sending 192 laser beams through a 1,500-meter journey that increases its energy output by a factor of more than a quadrillion. A breakthrough in nuclear fusion is widely considered the holy grail of achieving an unlimited clean energy source. Nuclear fusion is not to be confused with nuclear fission. © 2013 CBS Interactive Inc.

Three-dimensional integrated circuit In electronics, a three-dimensional integrated circuit (3D IC) is a chip in which two or more layers of active electronic components are integrated both vertically and horizontally into a single circuit. The semiconductor industry is pursuing this technology in many different forms, but it is not yet widely used; consequently, the definition is still somewhat fluid. 3D ICs vs. 3D packaging[edit] Notable 3D chips[edit] In 2004, Intel presented a 3D version of the Pentium 4 CPU.[1] The chip was manufactured with two dies using face-to-face stacking, which allowed a dense via structure. The Teraflops Research Chip introduced in 2007 by Intel is an experimental 80-core design with stacked memory. An academic implementation of a 3D processor was presented in 2008 at the University of Rochester by Professor Eby Friedman and his students. Manufacturing technologies[edit] As of 2008 there are four ways to build a 3D IC: Monolithic Wafer-on-Wafer Die-on-Wafer Die-on-Die Benefits[edit] Footprint Cost Power