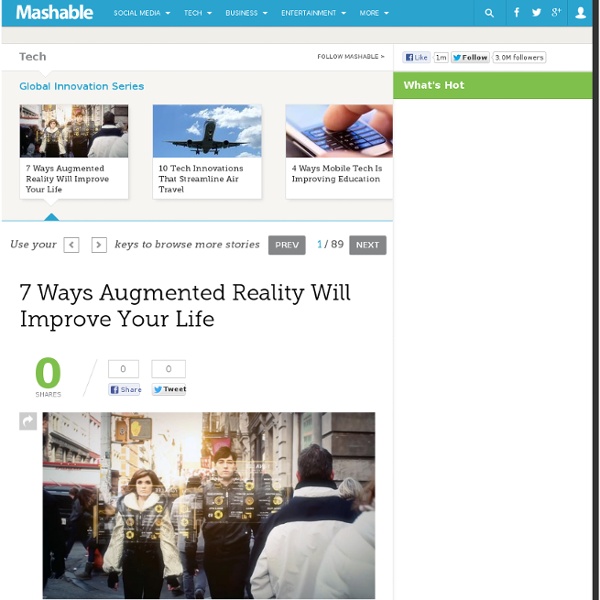 You might think augmented reality is the way of the future, but really, it has its roots in the 20th century. Morton Heilig, the "Father of Virtual Reality," patented the Sensorama Stimulator, which he called an "experience theater," on Aug. 28, 1962. Over time, the idea of using technology to create a layer over the real world has been honed and refined and put in our palms, thanks to the proliferation of smartphones. Confused about what augmented reality is? In short, it's a way to use technology to redefine space, and it places a virtual layer over the world with geographic specificity ensuring a good fit. While mainstream examples of AR have been, to date, on the fluffy side (like this and this), the technology has promise as an urban utility. "It's not a futuristic, fringy thing "It's not a futuristic, fringy thing," says Goldrun founder Vivian Rosenthal. Improvements to the technology means more promise for AR — and 2.5 billion AR apps are expected to be downloaded by 2017. 1. 2.

Real Holodeck turns your living room into a game - tech - 06 October 2014 Video: How to turn an entire room into a gaming surface Good news, Star Trek fans: Microsoft has created a prototype Holodeck that transforms an entire room into a virtual gaming environment. The system, dubbed RoomAlive, was unveiled today . RoomAlive builds on previous Microsoft work that combined a projector with an ordinary TV, extending the action to take up an entire wall. Robot fight Games developed so far include a version of Whack-A-Mole, where players use an infrared gun to zap moles as they appear around the room, and a robot fighting game played with an ordinary Xbox controller. Unlike the fictional Holodeck, which spawned objects in mid-air, RoomAlive's projections are constrained to surfaces. This system lets two players chuck fireballs at each other or throw and catch a tennis ball. "You don't have to carry anything or wear anything, so that has very significant advantages," says Anthony Steed of University College London, who wasn't involved in the work. Promoted Stories

Augmented Reality and Applications for Education – Part 2 Guest post by James Roberts. Though many would say that augmented reality is destined to play a role in the future of education, others would point out that it’s already here. Here is a lowdown on what Augmented Reality is and some ways it can be used in the classroom. Augmented Reality (AR) is the combination of reality and virtual reality, and allows you to put 3D content and images into the real world. Following is a selection of free applications that utilize Augmented Reality that can enhance learning in a number of subject areas: An great tool for making Astronomy more interesting and interactive is Google Sky Map for Android – with it, you simply point the camera on the stars on the smartphone, and Google Sky Map will attempt to identify them. For more insights into developments in instructional uses of Augmented Reality applications, check out last week’s post, “The Evolution of Augmented Reality Applications for Education and Instructional Use”. About Kelly Walsh Print This Post

Doctors with iPads could transform hospital care - tech - 12 June 2014 Modern medicine creates mountains of data – a suite of iPad apps called Medopad aims to integrate it all and place it in the palm of a doctor's hand HOSPITALS are packed full of valuable information about patients but doctors often struggle to use it effectively. A London-based start-up wants to change all that with a new suite of iPad apps called Medopad. The idea is to link up every data-making system and machine in a hospital to a central service which can deliver a patient's collated records – from historical medical files to X-ray and MRI scans – at the touch of a doctor's iPad. A number of bespoke Medopad apps help doctors manipulate and utilise this data. "We said let's just build tiny bridges and data-mine what we need for the app to do what it needs to do," says Medopad CEO Rashid Shahidi. For BMI Healthcare, the UK's largest private healthcare provider, Medopad could be about to transform how their doctors work. The system has a number of security features. Promoted Stories

20 Ways to Use Augmented Reality in Education Second Life proved an incredibly valuable tool for educators hoping to reach a broad audience — or offering even more ways to learn for their own bands of students. Augmented Reality Development Lab: Affiliated with Google, Microsoft, and Logitech, the Augmented Reality Development Lab run by Digital Tech Frontier seeks to draw up projects that entertain as well as educate. The very core goal of the ARDL involves creating interactive, three-dimensional objects for studying purposes. Reliving the Revolution: Karen Schrier harnessed GPS and Pocket PCs to bring the Battle of Lexington to her students through the Reliving the Revolution game, an AR experiment exploring some of the mysteries still shrouding the event — like who shot first! Players assume different historical roles and walk through everything on a real-life map of the Massachusetts city. FETCH! Driver’s ed: Toyota teamed up with Saatchi & Saatchi to deliver the world’s cleanest and safest test-drive via augmented reality.

The tech we were wearing before wearable tech At first glance, the building blocks of our wardrobes have barely changed in the last hundred years – or have they? The still-pervasive use of synthetic fabrics, cotton and animal skin may suggest we’re cut from the same cloth, but technology is being ingrained in the DNA of our clothing like never before. Technical fabrics – pervasive on the runway – provide the starting point for clothes that will eventually compute. Hussein Chalayan, whose name has always been synonymous with innovation, is an original practitioner of wearables. “Philips technology in every shirt and skirt” reads the slightly terrifying manifesto for the electronic giant’s Wearable Electronics centre in the late 90s. What to wear when it’s raining drones? Issey Miyake specialises in reversing norms: that fabric should be first pleated and then cut and sewn, or that evening dresses should be dry-clean only. Inspired by 90s-era silly string, London-based designer Manel Torres is the inventor of spray-on fabric.

How Tech That Learns Is Delivering a Curated Content Stream Just for You Netflix doesn’t really know what movie you want to watch tonight. At least, not yet. They have a pretty good idea based on what you’ve watched before, but Netflix doesn’t know that tonight is date night, or that you had a bad day and need a little pick-me-up. That’s about to change. There are plenty of services that offer suggestions based on choices that you, and supposedly similar users, have made in the past, but soon their recommendations will be getting a whole lot more personal. To learn more about this trend, PSFK reached out to Lama Nachman, principal engineer at User Experience Research at Intel Labs. PSFK: What does it mean for technology to be contextually aware? Lama: Technology is continuously improving at observing people over time due to the plethora of sensors embedded in our devices and our continuous use of these devices everywhere. More sensors, more devices and more personalized services mean much, much more data will be passively gathered about us.

Augmented Reality: The Future of EdTech By: Drew Minock Augmented reality is defined as “a live direct or indirect view of a physical, real-world environment whose elements are augmented (or supplemented) by computer generated sensory input such as sound, video, graphics, or GPS data.” (Wikipedia) We have discovered that augmented reality is much more than the definition describes – it is the future of educational technology. It all started on March 21st at the MACUL Conference in Detroit when the great Leslie Fisher showed the $20 bill trick using an app called Aurasma. Augmented reality allows us to put objects in the hands of our students that would have previously been impossible. There are several augmented reality applications available to download onto your mobile device, but few give you power to create your own experience like Aurasma. “She loves the Aurasma application, she loves that she can hear YOUR explanations at any time“– it’s so much better than doing homework with me or her father. character or person.