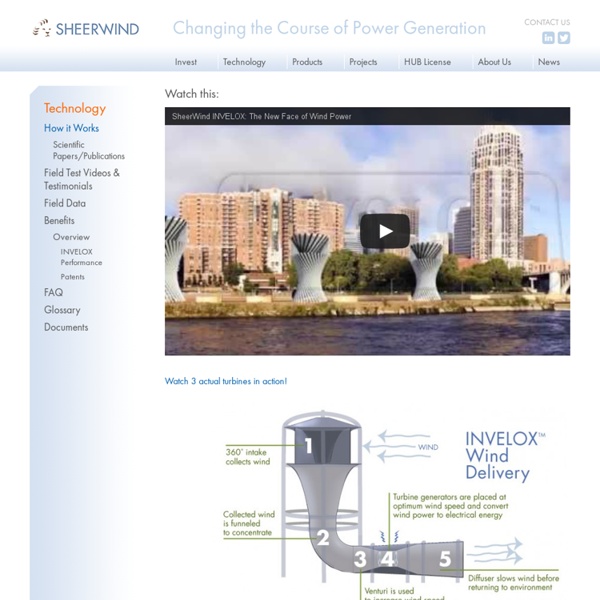 Watch this: Watch 3 actual turbines in action! SheerWind’s INVELOX Wind Delivery is simply a better way to harvest wind energy. Wind is captured at the top of the funnel shaped INVELOX system. The omnidirectional intake area allows wind collection from any directionWind is funneled through the systemWind is concentrated and further accelerated in the Venturi Effect* section of the INVELOX system. *The Venturi effect is the phenomenon that occurs when a fluid that is flowing through a pipe is forced through a narrow section, resulting in a pressure decrease and a velocity increase.Wind is delivered to the turbine/generators to convert the accelerated wind to electrical power. This system of capturing, concentrating, accelerating, and harvesting wind power in a funnel is a patented system we call INVELOX™ (for INcreased VELocity). SheerWind’s mission is to provide sustainable, affordable, electrical energy to anyone, anywhere. inShare213

EWICON bladeless wind turbine generates electricity using charged water droplets Dutch researchers have developed the EWICON, a bladeless windmill with no moving parts that produces electricity by pushing charged water droplets into the wind Image Gallery (2 images) Wind energy may be one of the more sustainable sources of power available, but the spinning blades of conventional wind turbines require regular maintenance and have attracted criticism from bird lovers. That might explain why we've seen wind turbine prototypes that enclose the blades in a chamber or replace them entirely with a disc-like system. But researchers in the Netherlands set out to eliminate the need for a mechanical component entirely and created the EWICON, a bladeless wind turbine with no moving parts that produces electricity using charged water droplets.

A Man Replaces His Lawn With a Giant Vegetable Garden and No Regrets During the summer, nothing is better than the smell of freshly cut grass. That is, unless, you have a giant vegetable garden growing in the place of your lawn. Instead of turf, this awesome homeowner, user locolukas on Reddit, opted for tomatoes. The results are absolutely epic. What you see actually used to be a lawn. But instead of mowing grass, one man decided to say “screw the lawn” and plant vegetables.

Silent rooftop wind turbines could generate half of a household's energy needs posted Categories: Wind Power For custom Web design needs, call Tech Distress (Click Here)! Small wind turbines scaled to the right size for residential and urban areas have so far lived in the shadows of their larger wind-farm-sized counterparts. The power output has been too low for a reasonable return on investment through energy savings and the noise they produce is louder than most homeowners can deal with. A Dutch renewable energy start-up called The Archimedes is working to solve both of those problems in a new class of small-scale wind turbine -- one that is almost silent and is far more efficient at converting wind into energy.

A $200 DIY Snowshovel Windmill Project This entire alternative energy project costs less than $200 to build. And, yes, those are snow shovels that you see in the photo. Once built, the windmill will need to be connected to some kind of appropriate alternator and then can generate 300 watts of power. This is the easiest homemade windmill you will find! CORRECTION! In the video I said 3000w generator...

Newly Invented Off-Grid Solar Grill Can Store Energy and Cook at Night Without Electricity It will store the heat energy for up to 25 hours released as a convective heat at temperatures of 450 degrees F. Barbecuing is one of the greatest pastimes for many, but it certainly isn’t one of our most environmentally friendly. Whether you prefer charcoal, wood chips or propane, grilling releases emissions and contributes to poor air quality. Up until now, solar powered grilling has required, as you might expect, the sun, which means traditional fuel-fired grills are required after sunset. But new solar technology developed by MIT professor David Wilson could bring a nighttime solar-powered grill to the market very soon; an invention also of great benefit to those in developing nations who rely on wood to cook all their food.

Ingenious Cardboard Packaging Folds to Fit Parcels of Any Shape Excessive packaging is one of our top pet peeves here at Inhabitat, so we were really inspired by this flat cardboard sheet that is capable of conforming to the shape of any object, saving a bundle on wasteful filler. Designed by Patrick Sung, the packaging design concept features triangulated perforations that allow it to bend around odd forms. This could also save on fuel for shipping, since all of that wasted box filler is eliminated. We could see how the concept would not be the most practical for all applications, but it could be really great for mailing a surprise gift to a friend! Soft items like clothing or shoes, or even products that are rigid, like a funky reusable water bottle, could be perfect for this packaging. Not to mention that the perforated lines give the package an interesting graphic pattern style.

Clarian Power: SmartBox Plug-In Wind Power The SmartBox Wind Turbine is a 48-inch tall vertical-axis wind turbine (VAWT) that plugs directly into an existing electrical outlet and automatically generates power whenever the wind is blowing. The SmartBox Wind Turbine can be mounted directly to the side of a home, on a rooftop or wind tower, or even existing street lights. And, it can generate up to 40 kWh per month in moderate winds enough to light an average home using energy efficient light bulbs. Expected to cost under $800, the SmartBox Wind Turbine is a cost-effective option for homeowners and small business owners looking to harness wind power for the first time. Working in tandem with the existing power grid, Working in tandem with the existing power grid, the SmartBox Wind Turbine works to conserve energy by producing enough clean, renewable wind power to offset a portion of the power being consumed in your home.

Homemade Wind Generator - Renewable Energy Are you headed for the beach or going camping in the mountains? Maybe you live on a boat, visit a remote cabin or you're living off-grid. Electricity is yours for the taking as long as the wind is blowing... And you can get it on the CHEAP with an easy homemade wind generator. A New Solar / Wind Charge Controller Based on the 555 Chip UPDATE This 555 based solar charge controller project has won first place in the Utility Category of the 555 Design Contest!!!!! Scroll to the bottom of the page for more information on the contest. Several years ago I began building my own wind turbines and solar panels to provide power on my remote, off-grid property. A charge controller is an essential part of any wind or solar system to ensure the batteries aren't over or under charged. The charge controller monitors the battery voltage and switches the batteries off charge when they are fully charged, and switches them back on charge when they reach a pre-set level of discharge. This is a new and improved charge controller design based on the 555 chip.

Sweden Runs Out Of Garbage: Only 1% Ends Up In Landfills Something incredible has been taking place in Sweden over the past several years, somewhat of a “recycling revolution,” if you will. Currently less than one percent of the garbage produced in Swedish homes ends up in the landfill today, with the other ninety-nine percent being recycled or composted. Sweden has been known for years now for the amazing and resourceful waste management system that they have had in place for some time. They have 32 waste-to-energy (WTE) plants and this burned waste powers 20 percent of Sweden’s district heating as well as electricity for about 250,000 Swedish homes. In fact, Sweden has become so good at recycling their waste; the country now has to import 800,000 tons of trash each year from the U.K., Italy, Ireland and Norway to keep their WTE plants up and running.

This wind turbine has no blades — and that’s why it’s better What do you get if you take the blades off a wind turbine? A better wind turbine. That sounds like a joke, but that’s actually more or less the model of a new wind turbine prototype. Instead of blades that turn in the breeze, the turbine is just a hollow straw that sticks up 40 feet from the ground and vibrates like a guitar string when the wind thrums by. The Spanish engineers who founded Vortex Bladeless in 2010 said they were inspired by the Tacoma Narrows Bridge disaster (maybe not the best pitch for clean energy to a disaster-wary public, but I’ll leave that to their marketing department).

Windstalk Windstalk "Our project starts out as a desire, a whisper, like grasping at straws, clenching water. Taking clues from the way the wind caresses a field of wheat, or reeds in a marsh; our hair on a gusty afternoon." Windstalk Designed for Site #3 in Abu Dhabi, adjacent to Masdar City Site.Concept and Design: Darío Núñez Ameni and Thomas Siegl, with Atelier dnawww.atelierdna.com New paradigm for solar cell construction demonstrated For solar panels, wringing every drop of energy from as many photons as possible is imperative. This goal has sent chemistry, materials science and electronic engineering researchers on a quest to boost the energy-absorption efficiency of photovoltaic devices, but existing techniques are now running up against limits set by the laws of physics. Now, researchers from the University of Pennsylvania and Drexel University have experimentally demonstrated a new paradigm for solar cell construction which may ultimately make them less expensive, easier to manufacture and more efficient at harvesting energy from the sun. The study was led by professor Andrew M.

Part of Nature cartoon by Stuart McMillen - Recombinant Records This cartoon is heavily influenced by the books Natural Capitalism - Paul Hawken, Amory Lovins and Hunter Lovins (1999) and Mid-Course Correction - Ray Anderson (1998). It is also in the same vein as the flash animation "The Story of Stuff" by Annie Leonard, which I watched when I was about 90% of the way through the drawing process. Back to post / website. View/add comments for this article.Part of Nature by Stuart McMillen. September 2009.