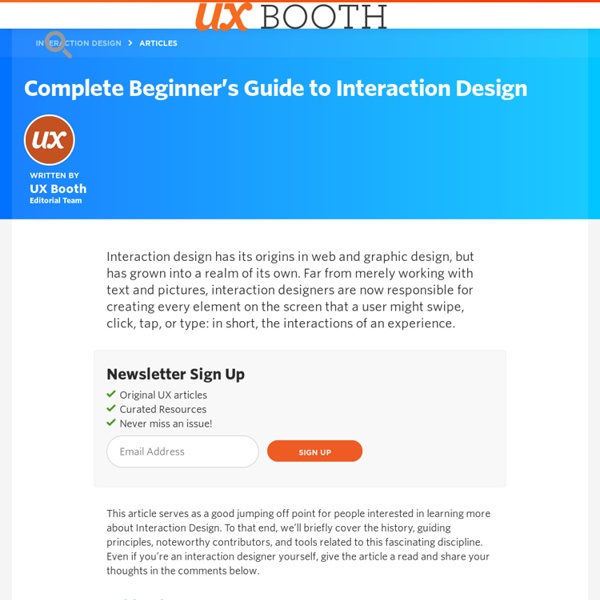 Design Pattern Library View the most recent patterns added to the library. Accordion There are too many items to fit into a limited space without overwhelming the user. Higher Education Expert, Manja Klemenčič We are experiencing higher education reforms in Europe of unprecedented speed and extent. Higher education and research are at the forefront of the government policies aiming towards more innovative, more just, and more dynamic societies. Higher education institutions are seen as central players in European knowledge societies. The reforms have had profound implications on all higher education stakeholders, including, and especially, academics, researchers, and students.

Designing for Mobile, Part 1: Information Architecture Around 1993, my dad brought home a large, brick-shaped mobile phone. We were all incredibly excited by the new technology, even though none of us thought it would have a massive impact on our lives. I actually still thought of it as a gimmick, a few years later, when some of my friends decided to purchase them. Today there are six-billion mobile subscribers in the world – meaning if there were one mobile per owner then 87% of the world’s population would have one. And considering that fewer than three billion people use a desktop computer, that’s quite a big difference.

OpenType OpenType® is a modern font format developed by Adobe® and Microsoft® to provide users with an accessible and advanced typographic toolset. OpenType improves on PostScript and TrueType just as the DVD trumped the video cassette. When deciding what format to choose, using the latest technology simply makes sense, but let’s dig a bit deeper and explore the ways OpenType makes life easier for typographers and graphic designers. OpenType is Efficient

6-interview-questions-you-must-ask-if-you-want-to-hire-the-best-people There's no lack of sources for canned interview questions. A quick Google search on the phrase interview questions turns up about 20 million hits! Good luck with that. Pew Future of the Internet Survey Report: Experts Predict Internet's Impact by 2025 The 2014 Survey: The biggest Internet impacts by 2025 Good or bad, what do you expect to be the most significant? Internet experts and highly engaged netizens participated in answering an eight-question survey fielded by Elon University and the Pew Internet Project from late November 2013 through early January 2014. One of the survey questions asked respondents to share their answer to the following query: Make your prediction about the role of the Internet in people's lives in 2025 and the impact it will have on social, economic, and political processes.

The web designer's guide to user experience User experience ('UX' to its friends) is a term increasingly bandied about. Currently in that strange position of being excitingly new to many, touted as an essential component of web design process by industry experts and seemingly on the way to becoming ubiquitous, UX also has an air of mystery about it. This is partly because it's tricky to pin down exactly what it is. When interviewed, industry pros told us the term can be "subjective", "hard to describe" and has come to mean various things. Dan Saffer, principal at Kicker Studios, was perhaps the most succinct, describing UX as "What a customer perceives while engaged with your product and a way of looking at a product holistically, from the point of view of a user who likely doesn't care about how something is made, just the product itself." HAND CODED: Kicker Studios' Dan Saffer thinks gestural interfaces (as seen in Canesta Gestural Entertainment Centre) will lead to a UX revolution

Responsive Layouts, Responsively Wireframed Responsive layouts, responsively wireframed Made with HTML/CSS (no images, no JS*) this is a simple interactive experiment with responsive design techniques. Use the buttons top-right to toggle between desktop and mobile layouts. Using simple layout wireframes, this illustrates how a series of pages could work across these different devices, by simulating how the layout of each page would change responsively, to suit the context. Responsive layouts? Producing static wireframes to design layouts for websites, web applications and user-interfaces has worked well for a long time. Unlocking the habits of Britain's smartphone generation The bond between a child and their smartphone is like an umbilical cord. Now, a new survey has uncovered just how dependent the “smartphone generation” of British children are on the devices compared to their European counterparts. The new survey used 2013 data from Net Children Go Mobile project of 3,500 children across Europe, combined with in-depth interviews, to examine how British children’s use of technology had changed since a previous survey in 2010. Smartphones have now become the most common device through which British children go online: 56% of the 516 British 9-16-year-olds surveyed use them to do so every day. This is more than the European average of 45%.

UX Design Defined - User Experience - UX Design User Experience Design (UXD, UED), Interaction Design (IxD), User Interface (UI) Design and other web/application design professionals use the term User Experience Design to refer to the judicious application of certain user-centered design practices, a highly contextual design mentality, and use of certain methods and techniques that are applied through process management to produce cohesive, predictable, and desirable effects in a specific person, or persona (archetype comprised of target audience habits and characteristics). All so that the affects produced meet the user’s own goals and measures of success and enjoyment, as well as the objectives of the providing organization. This is not the only definition of User Experience Design. UI and Capability UI and Capability by Ryan Singer (@rjs) This article was originally published on Feltpresence.com in December 2012.

eLanguages.ac.uk - digital literacies toolkit Welcome to the Digital Literacies Toolkit. This interactive learning tool was designed and developed by eLanguages in Modern Languages at the University of Southampton with support from the university Student Centredness Fund. The purpose of this set of learning resources is to help students: explore the educational uses of Web 2.0 tools and services;familiarise themselves with a range of useful applications for study-related purposes;highlight good practice in the use of social software and the internet, in general. Please use the buttons on the right for further information and to send us feedback.

Complete Beginner's Guide to Information Architecture Information architecture is a task often shared by designers, developers, and content strategists. But regardless of who takes on the task, IA is a field of its own, with influences, tools, and resources that are worth investigation. In this article we’ll discuss what information architecture really is, and why it’s a valuable aspect of the user experience process. Along the way we’ll share the history, contributors, and tools often used in creating an information architecture. Even if you’re familiar with the discipline already, you can probably pick up something you’ve missed.