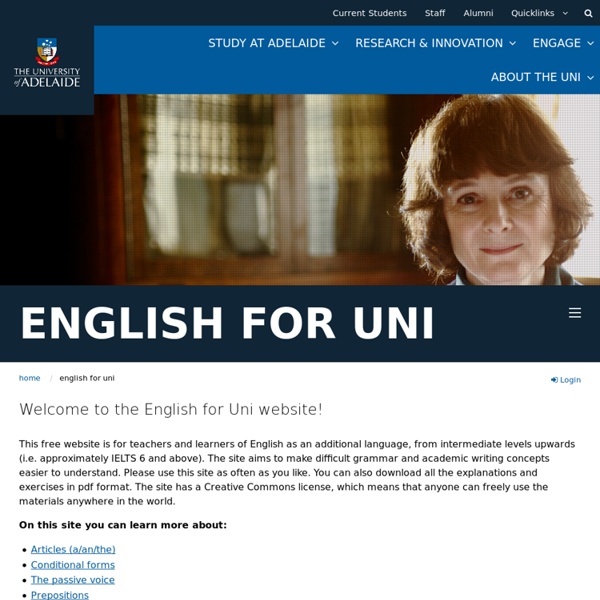 Welcome to the English for Uni website! This free website is for teachers and learners of English as an additional language, from intermediate levels upwards (i.e. approximately IELTS 6 and above). The site aims to make difficult grammar and academic writing concepts easier to understand. Please use this site as often as you like. On this site you can learn more about: There is also information for speakers and learners of Japanese, Chinese, French and Indonesian. All the sections of this website have video stories, explanations and exercises. All the videos have captions that you can view on YouTube. You may also like to view the glossary of grammar terms and other useful websites for help. Related:  English language • Technical English II • English

10 Best Grammar Resources for Teachers - Grammarly Blog Every day is a grammar day for teachers, but the whole world is invited to celebrate morphology and syntax on the fourth of March—National Grammar Day. Everyone loves a party, but how can you motivate students to embrace good grammar the other 364 days of the year? These ten grammar resources might be just what you need. 1 Visual Aids If students visualize how grammar works, they will be able to understand sentence structure. For example, an infographic on Copyblogger.com explains what a dangling participle is. 2 Online Courses According to its website, the Grammar Challenger helps students “master fifty of the trickiest . . . grammar, punctuation, and word usage” concepts. 3 Interactive Whiteboard Activities Interactive whiteboards project your computer screen on a dry-erase whiteboard. 4 Games What if students could learn and play at the same time? 5 Lesson Plans If you are looking for an effective way to teach a grammar point, other teachers are happy to share what works for them.

ECG - Presentation Skills Articles from PS ECG published a client newsletter entitled PS for Business CommunicatorsSM. Newsletter articles provide insight into key communication issues and other information of value to our clients. Below, are selected articles from past issues. Creating Visual Aids That Really Work Learn clear guidelines for using PowerPoint wisely that will focus the audience on your message and raise your impact as a presenter. How to Present the 100-Page Report How to deliver a succinct presentation from a detailed report without boring your audience. Pulling It Out of Thin Air What to do when you forget what to say. Distinguish Yourself When You Introduce a Speaker How to introduce a speaker with an introduction that gets noticed and gets results. Why Business Casual Is Not Always Business Clear Learn the key factors that guide choices for business casual attire to protect yourself and your organization. Dress Speak for Women Let's face it, clothes talk. Dress Speak for Men Media Skills: More Than Words Can Say

Academic writing - Learning & Teaching - Students Academic writing is the basis of assessment at university. Its structure and referencing systems are built around the idea of universities holding the knowledge of the world and adding to this knowledge. The following links offer access to various resources to assist you in completing your assignments with proper referencing and structure of writing. IMPORTANT: There are different styles of referencing, and different versions of both Harvard Referencing and APA. Paul Nation - School of Linguistics and Applied Language Studies BEdStud MA (Hons) DipTESL Paul Nation is Emeritus Professor in Applied Linguistics at the School of Linguistics and Applied Language Studies (LALS) at Victoria University of Wellington, New Zealand. His specialist interests are the teaching and learning of vocabulary and language teaching methodology. He has taught in Indonesia, Thailand, the United States, Finland and Japan. Recent books A recent book What you need to know to learn a foreign language pdf798KB is available to to dowload Translations pdf353KBSpanish - ¿Qué necesitas saber para aprender un idioma extranjero? The second edition of Learning Vocabulary in Another Language (2014) has now appeared from Cambridge University Press Two books written for teachers appeared in early 2013. The number of free Mid-frequency readers on this web site continues to increase (see below). A book, Making and Using Word Lists for Language Learning and Testing, has appeared in 2016 from John Benjamins. Publications Vocabulary Analysis programs Fiction

57 Literary Devices That’ll Elevate Your Writing (+ Examples) Where were you when your fourth-grade teacher first introduced you to literary devices? (Did you learn about the mighty metaphor? Or maybe its simpering cousin, the simile?) Perhaps you were daydreaming about cheese pizza and wondering what your mom packed you for lunch. Years later, you’re starting to realize that maybe you should’ve taken better notes back then. Because you’re a writer now, or trying to be, and it’s kind of embarrassing when your friends (or worse, your kids) come to you and ask: “What’s an onomatopoeia?” And all you have to say is: “An onomatopoeia? Never again. Not with this handy-dandy list of 57 (count ‘em!) But let’s back up. Starting with… What are Literary Devices? Literary devices are strategies writers use to strengthen ideas, add personality to prose, and ultimately communicate more effectively. So who should care about literary devices? You, of course. How are Literary Devices Different From Rhetorical Devices? So what’s the difference? Alright, enough questions. 1.

Placeholder names in English and other languages | OxfordWords blog If you follow politics, you will have noticed that politicians often invoke the cliché of the ‘man in the street’. You may have heard them referring to the average Joe, Joe Bloggs, John Public, Joe Sixpack, etc. when talking to an audience, addressing everyone and no one, rather than someone in particular. The English language has several of those placeholder names and, more often than not, they denote a male person – implying that the average person is a man, the everyman. There’s also the famous John Doe – the name for an unidentified person that you would come across in a legal context. Here, a female equivalent actually exists: Jane Doe. If you want to talk about ordinary people in general, you may also call them Tom, Dick, and Harry in English, although the Brewer’s Dictionary of Phrase & Fable notes that this Victorian term is particularly attributed to people unworthy of notice. Of course, placeholder names also exist in other languages. Italian Swedish German

phrasal verbs vs. nouns Phrasal verbs make up a huge category of expressions in English that careless users often misspell by substituting one-word noun forms for the standard two-word phrasal verb; for instance: it would have been a mistake for me to have written “Phrasal verbs makeup a huge category.” It is fine to write “I didn’t want to put on my makeup” (“makeup” is a noun) or “I had to take the makeup exam.” (In this example “makeup” is a noun acting like an adjective modifying another noun—“exam”. What kind of exam was it? A makeup exam.) Such nouns are often hyphenated, at least early in their history (it used to be common to write “make-up exam,” and that is still fine); but there is a strong tendency for such hyphenated forms to evolve into single words. Most phrasal verbs consist of a verb and adverb combined. All of this is of little use if you’re not clear about what a noun is and what a verb or an adverb is. Note: What follows is not meant to be exhaustive. go by vs. go-byHow time does go by.

Homework Tips - Help With Homework EAP Listening - Structure EAP Listening - Structure Several studies (e.g. Chaudron & Richards, 1986; DeCarrico & Nattinger, 1988) have suggested that explicit signals of text structure are important in lecture comprehension. Listening for these signals can therefore help you understand the lecture. Signals The tables below show some of the most common signals used in lectures to indicate structure (Leech & Svartvik, 1975). 1. At the beginning of a lecture, or a section of a lecture, the lecturer will give you some idea about the structure of the lecture. 2. Before the new information is given, the lecturer will often summarise what you are expected to know about the subject to be covered. 3. In a lecture, it is often necessary to define the terms that will be used. 4. The lecturer will often be explicit about the order in which new points will be mentioned. 5. In lectures, it is common to make generalisations. 6. When you are taking notes, you cannot write down every word. 7. 8. 9. 10. 11. When we classify, we arrange members of a group.

theconversation If you struggle to understand the teenagers and young people around you when they call their schoolfriend a durkboi and try to cadge some peas, you are not alone. The idea that they are communicating in a different language from their parents has been the subject of excited chatter on parenting websites and among some researchers. A defining characteristic of youth slang is thought to be its faddishness – the fact that terms have a rapid turnover, quickly coming in and out of fashion and then disappearing before parents and teachers have time to decode them. The reality is more complicated: novelty is all-important but for each generation the expressions they encounter will be new to them. So although each age group and almost every local clique do invent their own words, there is a common core of slang that persists for years: such as cool, wicked, solid and sick for good, and chilling for relaxing. A wealth of words for the same thing Variations on a theme

Suffixes, Parts of Speech, and the GRE Words can change the part of speech to which they belong by the addition of a suffix. They can also occupy more than one part of speech without any change in spelling at all. For example, talk may function as a verb or a noun. Being aware of this can be very helpful when you’re solving GRE analogy questions. dance : choreography :: a)conducter : orchestra b)play : plot c)sob : cry d)mix : cake c)ore: mine Which is the correct answer? wax : moon:: a)break : vase b)candle : floor c)rise : tide d)walk : exit e)alter : change How long did it take you to figure out that you needed to look for a verb : noun pair?

Advanced grammar with entertaining videos and online practice. Open source, free to use. Australian. by joheide May 1