Prince.org: where fans of Prince music meet and stay up-to-date 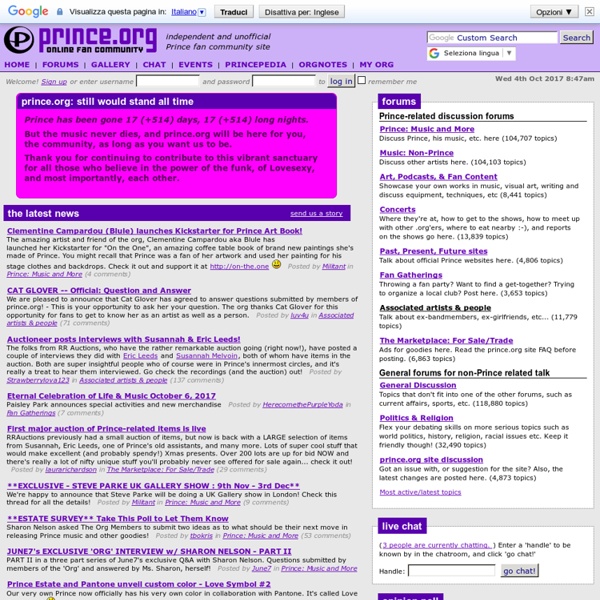 send us a story MUST LISTEN: The Prince Podcast – ANDRE CYMONE Interview RAW! MDean of the Prince Podcast does it again! He scored an interview with Andre Cymone and Andre is pretty awesome, discussing the behind-the-scenes of early Prince days. Andre is an amazing talent on his own, of course, but if you want to hear some of the real deal, you MUST listen to this podcast. I mean, I'm sure you listen to ALL the episodes already anyhow, but this one is definitely not to be missed.

SXSW: Prince Rocks Festival With Marathon of Encores John Sciulli for Samsung Prince About halfway through a marathon series of encores lasting nearly an hour and a half during his show at La Zona Rosa during South By Southwest last night, Prince asked the audience if they were done partying. Of course, they were not. “You know 5-hour Energy,” Minneapolis's favorite son asked, referencing the drink, “my middle name is 11-hour Energy.” Green Gartside: The brainiest man in pop (apart from Brian Eno) Any touring band is used to fans who turn up backstage with old singles, photographs and bits of ephemera to be signed. When Scritti Politti toured America for the first time in 2006, as part of their first live dates of any kind in 26 years, something different would happen. Earnest young men would approach Green Gartside – since 1977 Scritti's singer, songwriter-ideologue and sole constant member – and show him their published works of philosophy, claiming that they owed their interest in critical thought to Scritti's music. "The ratio of tactically deployed pop banality to smartarse references to Kant and Gramsci was occasionally uncomfortably high," admits Gartside of his band-cum-vehicle's commercial zenith in the mid-80s, when hits such as Absolute and The Word Girl snuck such subjects as unconditional reality and semiotics into the pop charts.

Prince, his guitar, and a new band, 3rd Eye Girl, hit the Roseland Theater Prince: the coolest man in the room at the Grammy Awards in February. John Shearer/Invision/AP Ida Nielsen got the call in 2010 while she was playing a festival in Europe. Asthmatic Kitty Records Sufjan Stevens is a singer-songwriter currently living in Brooklyn, NY. A preoccupation with epic concepts has motivated two state records (Michigan & Illinois), a collection of sacred and biblical songs (Seven Swans), an electronic album for the animals of the Chinese zodiac (Enjoy Your Rabbit), two Christmas box sets (Songs for Christmas, vol. 1-5 and Silver & Gold, vol. 6-10), and a programmatic tone poem for the Brooklyn-Queens Expressway (The BQE). His most recent records are from 2010: an expansive EP (All Delighted People) and the full length The Age of Adz, a collection of songs partly inspired by the outsider artist Royal Robertson.

Music Awards Kick-Off Sunday With Prince, Madonna, Lil Wayne, Taylor Swift, Justin Bieber, Bruno Mars, More There is nothing small about this Sunday night’s Billboard Music Awards at Las Vegas’ MGM Grand Garden Arena airing live on ABC at 8 ET hosted by “30 Rock”’s Tracy Morgan. Just consider for a moment the sheer star power of those appearing: living legends like Prince and Madonna; pop superstars like Taylor Swift, Justin Bieber, Lil Wayne and Bruno Mars; and the next generation of luminaries like Macklemore & Ryan Lewis, Miguel, the Band Perry and Ed Sheeran, among many others. Prince, one of the most inspirational and influential musicians of all time, will perform at Sunday’s ceremony and is being honored with Billboard’s prestigious Icon Award. Other performers include Taylor Swift, Lil Wayne, Nicki Minaj, Bruno Mars, Miguel, Justin Bieber, Pitbull, Christina Aguilera, Selena Gomez, the Band Perry, Macklemore & Ryan Lewis, Chris Brown, Ed Sheeran, Akon, Ne-Yo, David Guetta and Icona Pop. Swift, fun. and Maroon 5 top the finalists at the 2013 awards, with each included in 11 categories.

Max Ochs Now based in Severna Park, Maryland, Ochs continues to perform, write and record songs in an early folk and blues tradition. He was the curator of the folk music series at 333 Coffeehouse in Annapolis for over a decade. Discography[edit]