Twelve facts about guns and mass shootings in the United States 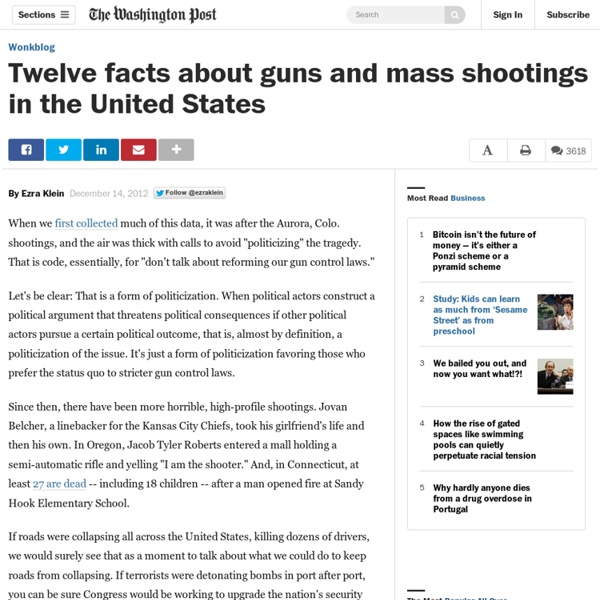 When we first collected much of this data, it was after the Aurora, Colo. shootings, and the air was thick with calls to avoid "politicizing" the tragedy. That is code, essentially, for "don't talk about reforming our gun control laws." Let's be clear: That is a form of politicization. When political actors construct a political argument that threatens political consequences if other political actors pursue a certain political outcome, that is, almost by definition, a politicization of the issue. It's just a form of politicization favoring those who prefer the status quo to stricter gun control laws. Since then, there have been more horrible, high-profile shootings. If roads were collapsing all across the United States, killing dozens of drivers, we would surely see that as a moment to talk about what we could do to keep roads from collapsing. What follows here isn't a policy agenda. 1. Mother Jones has tracked and mapped every shooting spree in the last three decades. 3. 4. 5. 6. 7. 8.

Refuting Anti-Gun Control Arguments © Josh Sager – January 2012 The recent rash of mass shootings in the United States is simply part of a long-term trend of gun violence unique to our country. The Sandy Hook school shooting is tragic—it caused the death of 20 children—but the true tragedy is that such a shooting is only the tip of the iceberg of our country’s gun problem. To a Bright Kid With Trouble(s) - Unwrapping the Gifted Hey there. Yup - you... Let's me and you talk for a minute, just the two of us. The Case for More Guns (And More Gun Control) - Jeffrey Goldberg How do we reduce gun crime and Aurora-style mass shootings when Americans already own nearly 300 million firearms? Maybe by allowing more people to carry them. Sven Liendbaek The Century 16 Cineplex in Aurora, Colorado, stands desolate behind a temporary green fence, which was raised to protect the theater from prying eyes and mischief-makers. The parking lots that surround the multiplex are empty—weeds are pushing through the asphalt—and the only person at the theater when I visited a few weeks ago was an enervated Aurora police officer assigned to guard the site. I asked the officer whether the building, which has stood empty since the night of July 20, when a former graduate student named James E.

Battleground America Just after seven-thirty on the morning of February 27th, a seventeen-year-old boy named T. J. Lane walked into the cafeteria at Chardon High School, about thirty miles outside Cleveland. It was a Monday, and the cafeteria was filled with kids, some eating breakfast, some waiting for buses to drive them to programs at other schools, some packing up for gym class.

Replying to my pro-gun friends - Coffee Party USA This was originally published on December 16, 2012. It's gone through several edits, most recently on February 2, 2013. Dear friends who can't tolerate anyone bringing up gun control: You're not going to intimidate me with your !!!! More guns, more crime: New research debunks a central thesis of the gun rights movement Making the world safer, or less safe? (Flickr user Robert Nelson / CC) "More guns, less crime" - surely you've heard this mantra before? There's even an entire book devoted to it.

NRA: full statement by Wayne LaPierre in response to Newtown shootings The National Rifle Association's 4 million mothers, fathers, sons and daughters join the nation in horror, outrage, grief and earnest prayer for the families of Newtown, Connecticut ... who suffered such incomprehensible loss as a result of this unspeakable crime. Out of respect for those grieving families, and until the facts are known, the NRA has refrained from comment. While some have tried to exploit tragedy for political gain, we have remained respectfully silent.

Race, Class, Violence and Denial: Mass Murder and the Pathologies of Privilege The senselessness alone would have been sufficient. So too the sheer horror. The devastated families, the tapestry of their lives ripped apart, would have been more than enough to make the events at Sandy Hook Elementary almost too weighty to bear. Much as they were more than a decade before at Columbine, or in any number of other mass or spree shootings — over five dozen by one count, more than 150 by another — that have played out over the past few decades

More Guns, Less Crime: A Dialogue - Ta-Nehisi Coates Sam Hodgson/Reuters My label-mate Jeffrey Goldberg was kind enough to take some time to talk with me about his most recent story in the magazine -- "The Case for More Guns (and More Gun Control)". Both Fallows and I have some disagreements with Jeff on this. Here, Jeff and I try to talk it out. We do not agree. Americans are becoming numb to gun violence. For teachers, it's all too real As a teacher, I expected to return to my classroom after the holidays refreshed and ready for the second half of the year. That's happened to a certain extent, but I can't ignore the ongoing violence in America's schools. On 14 January, a 12-year-old boy in New Mexico came to school with a sawed-off, 20-gauge shotgun and opened fire, wounding two students before a teacher was able to persuade him to put the gun down. On 17 January, two high school students were injured at a charter school in Philadelphia when another teen opened fire. On 20 January, a student sitting in the parking lot of Widener University in Chester, Pennsylvania was injured by an unknown gunman.

Five Lies The Gun Lobby Tells You America seems to be in for another debate over gun regulation after the slaughter at Sandy Hook Elementary School left 27 (mostly children) dead. So it’s worth reviewing five made against regulating gun ownership in the United States: MYTH #1: More guns don’t lead to more murders. More Guns Don't Mean Less Crime Posted at 7:27 a.m. on Jan. 12 A new analysis of the impact of right to carry (RTC) laws by Stanford University’s Abhay Aneja and John Donohue and Johns Hopkins University’s Alexandria Zhang debunks the “more guns, less crime” thesis. “On the contrary, the evidence suggests that the effects of RTC laws on crime are positive, meaning that adopting RTC laws appears to result in crime increases. This effect is strongest and most consistent for aggravated assault.”

There's Little We Can Do to Prevent Another Massacre The things that would work are impractical and unconstitutional. The things we can do won't work. There just aren't good words to talk about Newtown. It is a crime that literally defies imagination--hell, it flings imagination down and dances upon its head. No one reading this can imagine strolling into an elementary school and opening fire on a bunch of small children.

The link between gun deaths and gun ownership: What we know It's surprising how little we know about the relationship between gun deaths and gun ownership, or the ability of states to curtail one by regulating the other. The U.S. Centers for Disease Control and Prevention last included a question on firearms ownership in its gold standard survey in 2004. "We know a lot more about the sexual practices of the population -- whether they have anal sex or use condoms or have multiple partners -- than we know about whether they own guns," said Michael Siegel, a Boston University public health researcher who began studying guns after more than two decades focusing on cigarettes. Research has been limited over the past 20 years by political pressure from the National Rifle Association that cut federal and private research funding related to firearms to a trickle. The NRA argued that at least one gun study funded by the CDC was dubious and amounted to federally funded gun-control advocacy.