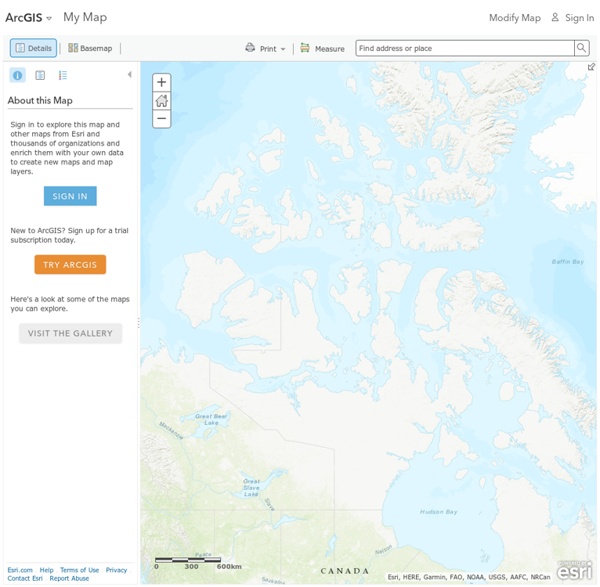 Mapa Mundial Vistas Multi - Genero Powered by WorldMap WorldMap Sign in | Create Map | View Map | Help Search for geospatial data Selected Data Refine Search 20 Good Map Creation Tools for Students A couple of years ago I published a list of 21 online map creation tools. Since then some of those tools have gone offline and new tools have replaced them. Here's my updated list of online map creation tools for students and teachers. Wikia Maps is a map creation tool from Wikia. Wikia Maps has two map creation options. Thinkmap SDK The Thinkmap SDK enables organizations to incorporate data-driven visualization technology into their enterprise Web applications. Thinkmap applications allow users to make sense of complex information in ways that traditional interfaces are incapable of. The Thinkmap SDK (v. 2.8) includes a set of out-of-the-box configurations for solving common visualization problems, as well as new visualization techniques for customizing data displays. We have designed Thinkmap to be lightweight, fast, easily extensible, and able to connect seamlessly to a wide variety of data sources. Thinkmap is composed of two primary components:

200 Countries, 200 Years, 4 Minutes Hans Rosling explains a very common misunderstanding about the world: That saving the poor children leads to overpopulation. Not only is it not right, it’s the other way around! The world might not be as bad as you might believe! Don’t Panic – is a one-hour long documentary produced by Wingspan Productions and broadcasted on BBC on the 7th of November 2013. How to draw a map This tutorial covers my entire process for how to draw a map – from start to finish. In this case I’m illustrating a simple town map, but the steps apply to any map. Tools and Software I used Photoshop for this map, but all of this can be done in Gimp (for free). I also use a graphics tablet. Tablets are great for this work, and if you’re thinking about digital map making I’d recommend picking one up.

Visual:Acuity Dashboard Solutions What is a dashboard? The fact is, there's a fair amount of confusion about how to define a dashboard. We think Stephen Few, author of Show Me the Numbers and Information Dashboard Design, has it just about right; "A dashboard is a visual display of the most important information needed to achieve one or more objectives, consolidated and arranged on a single screen so the information can be monitored at a glance." The Problem. Dashboards today fall woefully short of delivering on their promise of more informed and proactive managers. Why? The Big Business of 'Big Data' GE Appliances & Lighting, via Business WireA GE data center. Is Big Data a Bubble? In case you’re in a hurry: Of course it is. And that is good.

International Programs - Information Gateway Frequently Asked Questions (FAQ) 1. What is the International Data Base? The International Data Base (IDB) offers a variety of demographic indicators for countries and areas of the world with a population of 5,000 or more. 40 Under 40: Ones to watch - Josh James (1) Founder, CEO and Chairman, DomoAge: 38 James made the 40 Under 40 main list in 2009 for his web analytics firm, Omniture, which Adobe bought for $1.8 billion. His new venture, Domo, hasn't launched its product yet, but will provide software that puts business information services on notice. By drawing upon all branches of a company's enterprise solutions, Domo seeks to provide comprehensive internal information to executives in real time. Some heavy-hitting investors think Domo's solution is a good one; it has raised $43 million (close to $50 million if you include James's personal investment) from Benchmark and angels such as Marc Benioff, Ron Conway and Andreessen Horowitz. NEXT: Hosain Rahman

Interactive Map of Europe, Europe Map with Countries and Seas Europe is the second smallest of the inhabited continents. It is a part of the Eurasian land mass that includes Europe, Asia, Asia Minor and the Arabian Peninsula. As many large islands east and south of Asia are usually included in Asia, the Eurasian land mass extends from Iceland to New Guinea, from the Atlantic to the Pacific and from the Arctic to the Indian Oceans. Just where to divide this mass into continents has long been debated. Traditionally the Ural mountains in Russia have been used as a division.