Wikileaks Founder on the Run, Chased by Tormoil 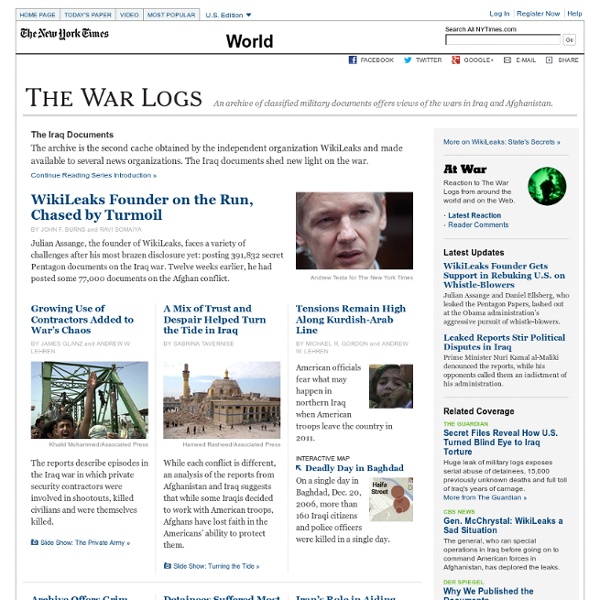 Prosecutors: Rape Claim against Assange Bogus WikiLeaks founder Julian Assange gives a seminar at the Swedish Trade Union Confederation headquarters in Stockholm, Sweden, in this Aug. 14, 2010 file photo. AP Photo Updated at 1:32 p.m. Eastern Swedish prosecutors withdrew an arrest warrant for the founder of WikiLeaks on Saturday, saying less than a day after the document was issued that it was based on an unfounded accusation of rape. They said that for the moment Julian Assange remains suspected of the lesser crime of molestation in a separate case. The accusations have been labeled a dirty trick by Julian Assange and his group, who are preparing to release a fresh batch of classified U.S. documents from the Afghan war. Swedish prosecutors had urged Assange — a nomadic 39-year-old Australian whose whereabouts were unclear — to turn himself in to police to face questioning in the case involving suspicions of rape and the other based on an accusation of molestation. "The prosecutor hasn't made a decision" on that count, Rosander said.

CIA “Honeytrap” Ardin Deleted Twitter Posts Praising Assange Kurt Nimmo Infowars.com December 10, 2010 Anna Ardin, described in court documents as “Miss A,” had deleted Twitter messages speaking highly of Wikileaks founder Julian Assange, the man she would later accuse of rape, according to Göran Rudling, the editor Consensus Now, a website arguing that laws based on sexual activities need to be consensual to not be considered criminal. Assange was in Stockholm, Sweden, in August to speak at the invitation of Sweden’s Social Democratic Party. The event was organized by Ardin, who was the press secretary of the Brotherhood Movement, which is an adjunct of the Social Democratic Party. The 31 year old woman is described as a feminist, leftist and animal rights activist who previously worked at the Uppsala University where she handled equality issues for the students’ union. In newspapers and blogs, the blond Swede has been called a “honey trap” — see here, here, and here — a word that describes intelligence agencies using women to lure in male targets.

WikiLeaks founder Assange has encrypted Guantanamo documents, will release them if arrested WikiLeaks founder Julian Assange has circulated across the internet an encrypted “poison pill” cache of uncensored documents suspected to include files on BP and Guantanamo Bay. One of the files identified this weekend by The (London) Sunday Times — called the “insurance” file — has been downloaded from the WikiLeaks website by tens of thousands of supporters, from America to Australia. Assange warns that any government that tries to curtail his activities risks triggering a new deluge of state and commercial secrets. The military papers on Guantanamo Bay, yet to be published, believed to have been supplied by Bradley Manning, who was arrested in May. Other documents that Assange is confirmed to possess include an aerial video of a US airstrike in Afghanistan that killed civilians, BP files and Bank of America documents. One of the key files available for download — named insurance.aes256 — appears to be encrypted with a 256-digit key.

Wikileaks founder Julian Assange refused bail 8 December 2010Last updated at 04:45 GMT Julian Assange (left) appeared in court with John Pilger and others offering sureties The founder of whistle-blowing website Wikileaks, Julian Assange, has been refused bail by a court in London but vowed to fight extradition to Sweden. Mr Assange denies sexually assaulting two women in Sweden. He was remanded in custody pending a hearing next week. A judge at City of Westminster Magistrates' Court refused bail because of the risk of the 39-year-old fleeing. A Wikileaks spokesman said the arrest was an attack on media freedom and pledged to continue publishing. After the court appearance Mr Assange's lawyer Mark Stephens said he would be applying again for bail. He claimed the accusations were "politically motivated" and said the judge was keen to see the evidence against Mr Assange, an Australian citizen. Mr Stephens said Wikileaks would continue to publish material and added: "We are on cable 301 and there are 250,000 secret cables." The allegations

Why I'm Posting Bail Money for Julian Assange December 14th, 2010 6:23 AM By Michael Moore Yesterday, in the Westminster Magistrates Court in London, the lawyers for WikiLeaks co-founder Julian Assange presented to the judge a document from me stating that I have put up $20,000 of my own money to help bail Mr. Assange out of jail. Furthermore, I am publicly offering the assistance of my website, my servers, my domain names and anything else I can do to keep WikiLeaks alive and thriving as it continues its work to expose the crimes that were concocted in secret and carried out in our name and with our tax dollars. We were taken to war in Iraq on a lie. So why is WikiLeaks, after performing such an important public service, under such vicious attack? **Sen. **The New Yorker's George Packer calls Assange "super-secretive, thin-skinned, [and] megalomaniacal." **Sarah Palin claims he's "an anti-American operative with blood on his hands" whom we should pursue "with the same urgency we pursue al Qaeda and Taliban leaders." **Rep. P.S. P.P.S.

Logan Symposium: The New Initiatives Bio Julian Assange Julian Assange is an Australian journalist, programmer and Internet activist, best known for his involvement with Wikileaks, a whistleblower website. Lowell Bergman Lowell Bergman, Director of the Investigative Reporting Program, is also a producer and correspondent for the PBS documentary series Frontline, and the Reva and David Logan Distinguished Professor of Investigative Reporting at the Graduate School of Journalism. Birgitta Jonsdottir Birgitta Jonsdottir was born in Reykjavik, Iceland 1967. Jonsdottir has been active in the Icelandic literature, music, and art scenes for more then 20 years and is considered one of the pioneers in bringing art and literature to the Internet. In 2008 she was one of the primus motors in various grassroots movements and helped co-found Solitary, a coalition of the grassroots movements for social change because of the economical collapse in Iceland. Charles Lewis Lewis was awarded a MacArthur Fellowship in 1998. Gavin MacFadyen

WTF? CIA Sets Up Wikileaks Task Force Kurt Nimmo Infowars.com December 22, 2010 You can’t make this stuff up. The CIA has established a Wikileaks Task Force and it’s acronym is WTF, same as the ubiquitous internet slang term. According to the Washington Post, the task force was officially created to examine the impact of 250,000 Wikileaks released diplomatic files. “Officially, the panel is called the WikiLeaks Task Force. Many have asked if Wikileaks is a CIA front. Young stopped having anything to do with Wikileaks after the organization admitted taking money from the Open Society Institute, a George Soros operation. The CIA has created a large number of front organizations. “Throughout its entire history, the CIA has set up an elaborate shell game of ‘proprietaries’ (front companies), money-laundering operations and off-the-books projects so complex that no outsider — and few insiders — could ever keep track of them. At the Campaign for Liberty Regional Conference in Atlanta earlier this year, Rep. Print this page. Sen.

WikiLeaks: Julian Assange 'faces execution or Guantánamo detention' | Media WikiLeaks founder 'happy' after extradition hearing Link to video: Julian Assange 'happy' after extradition hearing Julian Assange, the founder of WikiLeaks, could be at "real risk" of the death penalty or detention in Guantánamo Bay if he is extradited to Sweden on accusations of rape and sexual assault, his lawyers claim. In a skeleton summary of their defence against attempts by the Swedish director of public prosecutions to extradite him, released today, Assange's legal team argue that there is a similar likelihood that the US would subsequently seek his extradition "and/or illegal rendition", "where there will be a real risk of him being detained at Guantánamo Bay or elsewhere". "Indeed, if Mr Assange were rendered to the USA, without assurances that the death penalty would not be carried out, there is a real risk that he could be made subject to the death penalty. The other points of argument include: • That the "conduct" of the Swedish prosecutor amounts to abuse of process.

Julian Assange Speech in Defense of Whistle-Blowers (April 2011) Julian Assange, WikiLeaks co-founder and editor-in-chief, speaks at the New Statesman/Frontline Club debate on the motion: "This house believes whistleblowers make the world a safer place." Speakers for the proposition were Julian Assange, editor-in-chief of WikiLeaks, Mehdi Hasan, senior editor (politics) of the New Statesman, and Clayton Swisher, head of al-Jazeera's transparency unit. Speakers for the opposition were: David Richmond, former director for British defence and intelligence and member of the Foreign and Commonwealth Office Board, Bob Ayers, former director of the information systems and security programme at the US department of defence, and Douglas Murray, author and commentator. The event took place on April 9th, 2011 at Kensington Town Hall, London.