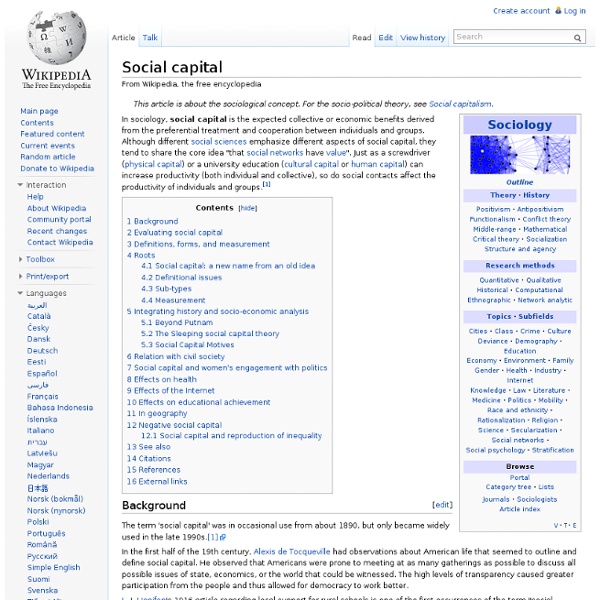 In sociology, social capital is the expected collective or economic benefits derived from the preferential treatment and cooperation between individuals and groups. Although different social sciences emphasize different aspects of social capital, they tend to share the core idea "that social networks have value". Just as a screwdriver (physical capital) or a university education (cultural capital or human capital) can increase productivity (both individual and collective), so do social contacts affect the productivity of individuals and groups.[1] Background[edit] The term "social capital" was in occasional use from about 1890, but only became widely used in the late 1990s.[1] In the first half of the 19th century, Alexis de Tocqueville had observations about American life that seemed to outline and define social capital. L. John Dewey actually used the term in his monograph entitled "School and Society" in 1900, but he offered no definition of it. Evaluating social capital[edit]

Getting Started with Bitcoin - We Use Coins Step 1 - Get a wallet There are many wallets to choose from and here are our recommendations: Web Wallets - Web wallets are the easiest & most convenient to use, but are potentially less secure than wallet software run on your own computer. Software Wallets - Software wallets are downloaded and run from your computer.

socialcapitalgateway.org Lyda Judson Hanifan (February 12, 1879—December 11, 1932; better known as L. J. Hanifan) is credited with introducing the concept of social capital. Robert Putnam in his book, Bowling Alone (2000) credits a 1916 paper by Hanifan as the first recorded instance of the term. Hanifan also authored a book published in 1920 that contains a chapter entitled "Social Capital".

Parlaying Value Capital in and Beyond Virtual Worlds Abstract Recent scholarship has made it clear that people within synthetic worlds (otherwise known as virtual worlds or MMORPGs) produce commodities and currencies with market value, whereas other work has established the increasing importance of social networks within and between worlds and across the boundary that appears to separate them from the rest of users' lives. Bitcoin: How the Internet Created Its Own Currency Bitcoin is a peer-to-peer decentralized digital currency. It differs from traditional, government-backed currencies in that there is no central issuer, and there are no middlemen involved for various transactions. Back in 1998, the concept of crypto-currency was described by Wei Dai on a cypherpunks mailing list. Internet Connectivity and Economic Development - Science and Tech Across the world, two in 10 households have access to the Internet at home, according to a just-released Gallup survey. Internet access at home was far greater in more economically advanced countries: Nearly eight in 10 people (78 percent) in countries where gross domestic product (GDP) is more than $25,000 have Internet access at home. Home Internet access drops off steeply in less affluent, less developed nations, according to the Gallup survey, especially in countries with less than $10,000 in per capita GDP. The survey is based on telephone and face-to-face interviews with approximately 1,000 adults, aged 15 and older in 116 countries, and was conducted in 2009.

Online research methods Online research methods (ORMs) are ways in which researchers can collect data via the internet. They are also referred to as Internet research,[1] Internet science[2] or iScience, or Web-based methods.[3] Many of these online research methods are related to existing research methodologies but re-invent and re-imagine them in the light of new technologies and conditions associated with the internet. The field is relatively new and evolving. 6 New Bitcoin Educational Resources In the fast-moving Bitcoin world, it’s crucial to stay up to date with the latest in educational resources and new media. The last two months have seen an explosion in media attention and a desire for new users to learn as much as possible about the global bitcoin economy. It is within this spirit that I present the latest Bitcoin educational resources to hit the web: CoinDesk – This London-based resource and news operation aims to be the “Reuters of Bitcoin” according to its founder Shakil Khan. As an angel investor in Spotify and bitcoin startup BitPay, Khan noticed a gap in the news coverage for bitcoin and digital currencies in general when other entrepreneurs constantly questioned him about the bitcoin. Also just last month, Khan assisted in orchestrating the sale of his mobile news gathering portfolio company, Summly, to Yahoo for approximately $30 million.