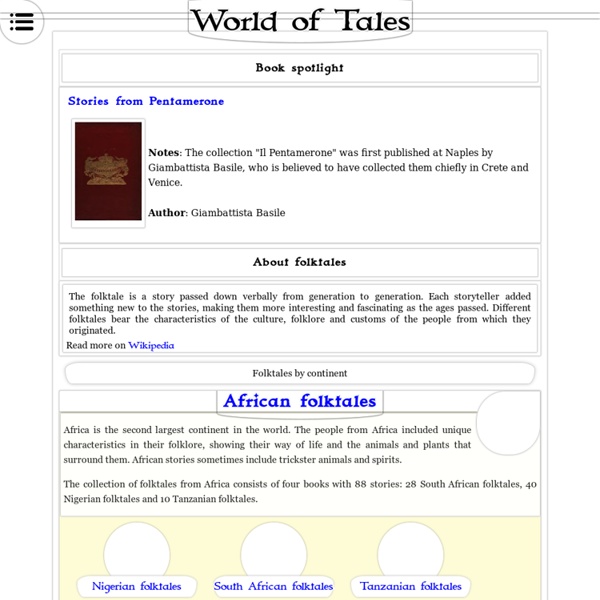 About fairy tales People have been telling each other fairy tales since ancient times. A very significant literature genre, fairy tales are present in all cultures around the world. In comparison to myths and legends, the time and place of occurrence in fairy tales are not defined. The characteristics of fairy tales include the appearance of fantastic elements in the form of talking animals, magic, witches and giants, knights and heroes. It wasn't until the 17th century that fairy tales in Europe were written down and preserved for future generations.

Folklore A magic carpet - a carpet that can allegedly transport persons instantaneously or swiftly to a destination. Folklore can be divided[by whom?] into four areas of study: artifacts (such as voodoo dolls)describable and transmissible entity (oral tradition)culturebehavior (rituals) These areas do not stand alone, however, as often a particular item or element may fit into more than one of these areas.[2]

English-Guide.org A great interactive resource! Read the story book about the missing ice cream. Then go through the exercises to learn about the structure of a story including the characters, the setting and the plot line for the events of the story. You can use your understanding of these elements with anything you read or watch. Status: Published Updated date: Mon, 12/15/2014 - 02:16 When reading it is important to be able to tell the difference between facts and ideas/opinions. Read this biography and learn about the baseball player Jackie Robinson.

Download 422 Free Art Books from The Metropolitan Museum of Art You could pay $118 on Amazon for the Metropolitan Museum of Art’s catalog The Art of Illumination: The Limbourg Brothers and the Belles Heures of Jean de France, Duc de Berry. Or you could pay $0 to download it at MetPublications, the site offering “five decades of Met Museum publications on art history available to read, download, and/or search for free.” If that strikes you as an obvious choice, prepare to spend some serious time browsing MetPublications’ collection of free art books and catalogs. You may remember that we featured the site a few years ago, back when it offered 397 whole books free for the reading, including American Impressionism and Realism: The Painting of Modern Life, 1885–1915; Leonardo da Vinci: Anatomical Drawings from the Royal Library; and Wisdom Embodied: Chinese Buddhist and Daoist Sculpture in The Metropolitan Museum of Art.

Celtic Otherworld In Celtic mythology, the Otherworld is the realm of the living and the home of the deities and other powerful spirits. Tales and folklore refer to the Otherworld as "The Fortunate Isles" in the western sea, or at other times underground (such as in the Sídhe) or right alongside the world of the living, but invisible to most humans. The intrusion of the Otherworld into this one is signaled by the appearance of divine beings or unusual animals, or other phenomena such as sudden changes in the weather.[1] Sometimes an otherworldly woman will present an apple or an apple branch, or a ball of thread to follow as it unwinds.[1][2] Beliefs of the ancient Gauls[edit] In Lucan's account of the druidical doctrine of metempsychosis, the Otherworld is referred to as Orbis alius.[3]

List of dragons in mythology and folklore From Wikipedia, the free encyclopedia This article is a list of dragons in mythology and folklore. See also[edit] References[edit] The Most Read Book Among High School Seniors From Each State, in One Surprising Map Native Americans living in the Northeast, like Game of Thrones fans, knew one thing at this time of year: Winter is coming. As such, now was the time for one last glut of food before a four-month-at-least period of traveling along with migrating prey in order to hunt for fresh food. In that sense, yes, Native American harvest feasts are a clear primogenitor to today's Thanksgiving. But the truth is more complex. As Thanksgiving matured as a holiday in the Americas, many of the inhabitants in the United States — Native Americans, settlers and enslaved Africans — contributed elements of our modern Thanksgiving meal to the table. If Thanksgiving is an American tradition, then its roots are as varied and widespread as America, as well.

Free e-Books for Kids - The Mouse That Was The Mouse That Was is a story of a mouse that lived for months in a little hole below a small tree. When the mouse decided to explore the world little fact he knew that he has no relevance with the animals in the zoo! The short ebook story is all about searching happiness in different places without knowing that happiness is what we have!

Celtic deities The gods and goddesses of the pre-Christian Celtic peoples are known from a variety of sources, including written Celtic mythology, ancient places of worship, statues, engravings, cult objects and place or personal names. In characteristic Roman fashion, Caesar does not refer to these figures by their native names but by the names of the Roman gods with which he equated them, a procedure that greatly complicates the task of identifying his Gaulish deities with their counterparts in the insular literatures. He also presents a neat schematic equation of god and function that is quite foreign to the vernacular literary testimony. Wawel Dragon The Wawel Dragon (Polish: Smok Wawelski), also known as the Dragon of Wawel Hill, is a famous dragon in Polish folklore. His lair was in a cave at the foot of Wawel Hill on the bank of the Vistula River. Wawel Hill is in Kraków, which was then the capital of Poland. In some stories the dragon lived before the founding of the city, when the area was inhabited by farmers. History[edit]

The Harvard Classics: A Free, Digital Collection During his days as Harvard’s influential president, Charles W. Eliot made a frequent assertion: If you were to spend just 15 minutes a day reading the right books, a quantity that could fit on a five foot shelf, you could give yourself a proper liberal education. The publisher P. F. Collier and Son loved the idea and asked Eliot to assemble the right collection of works.