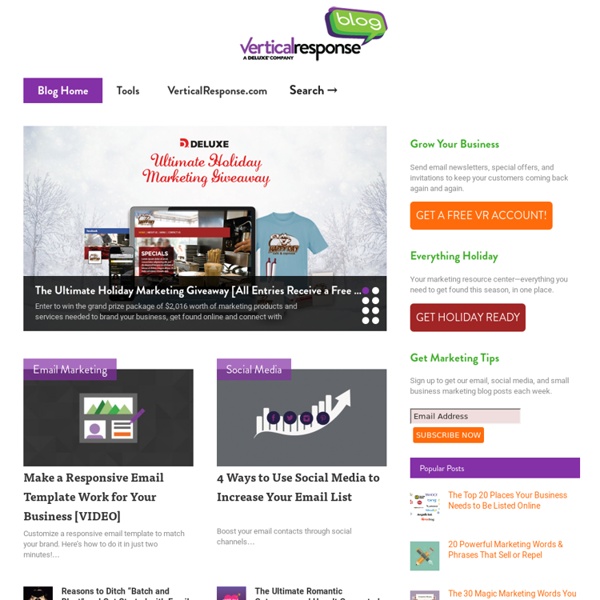 Customize a responsive email template to match your brand. Here’s how to do it in just two minutes!… DesignCalls to Action: 50 that Sell and 10 that Repel → September 30th | by Lisa Furgison

Email marketing blog: No man is an iland I once had a tarantula walk over my hand. The experience comes to mind every time I face a blank piece of paper. A rising sense of panic…paralysis…a prickle of sweat. Sound familiar? So I thought I’d share the practical tricks I use to write email marketing copy. Not so much the intricacies of word choice or paragraph structure, but the process of actually getting the job done and done well. 1. The writing process needs a framework to proceed in: a real or implicit briefing…the whos, whats and whys of the task. Who will get this email and in what context? Have they undertaken some specific action (like registered for an event)? When will they get the email? How does this email fit, conceptually and in terms of timing, with other emails or related marketing campaigns the recipient might see? 2. Well, yeah! “Get another email into their inbox” is an objective. But are they defined well-enough? What is it you actually want to happen as a result of this email? 3. 4. 5. 6. 7. 8. 9. 10. 11. Here you go.

Online Marketing Blog Posts, Tips, Tricks and Advice In less than five years Kickstarter has helped entrepreneurs raise over $1B to fund more than 59,000 creative projects thanks to almost 6 million contributors. Indiegogo’s numbers aren’t too shabby either; in July 2013 they launched the most ambitious campaign to date – the Ubuntu Edge smartphone campaign, aiming to raise $32 million through crowdfunding. How do ambitious startups succeed through crowdfunding platforms? Pebble Pebble is a watch that speaks to your smartphone and lets you wear your digital life on your wrist. The Triumph Launched in April 2012, the initial target for the campaign was a modest $100,000 which was pledged within two hours of the project going live. In total, Pebble raised a cool $10.2 million through crowdfunding. The Lesson Don’t give up. Diaspora The brainchild of four NYU programmers, Diaspora is an open-source personal web server that puts individuals in control of their online data. Solve a real, current problem. The 10-Year Hoodie Listen to your backers.

Chris Baggott&#039;s Email Marketing Best Practices Home Based Business Plan, Financial Investment, MLM Opportunities Marketing Strategies For The Internet & Traditional Businesses. NewsBlaze Published: April 09, 2008 Press Release MONTREAL, QUEBEC - (Marketwire - April 9, 2008) - Montreal-based company CakeMail Inc. has announced that its email marketing platform cakemail.com has been chosen as a key component of the grassroots movement An Obama Minute, a web-based fundraising tool which seeks to mobilize Americans to contribute one million dollars in sixty seconds to the Barack Obama campaign for the Democratic Party nomination. CakeMail is a true white label on-demand email marketing platform that is 100% customizable, open and extendable by third parties. "CakeMail has made it very easy for our grassroots movement to build the An Obama Minute campaign quickly, efficiently and intuitively", states Scott Cohen, creator of the An Obama Minute campaign. Through its participation in the An Obama Minute campaign, CakeMail is contributing to an overall political strategy which, for the first time in U.S. political history, has been heavily dependent upon online mobilisation.

DIY Website Promotion | How to Create and Submit Websites to Sea Insight Community.