Someone Left The Cake Out In The Rain - StumbleUpon 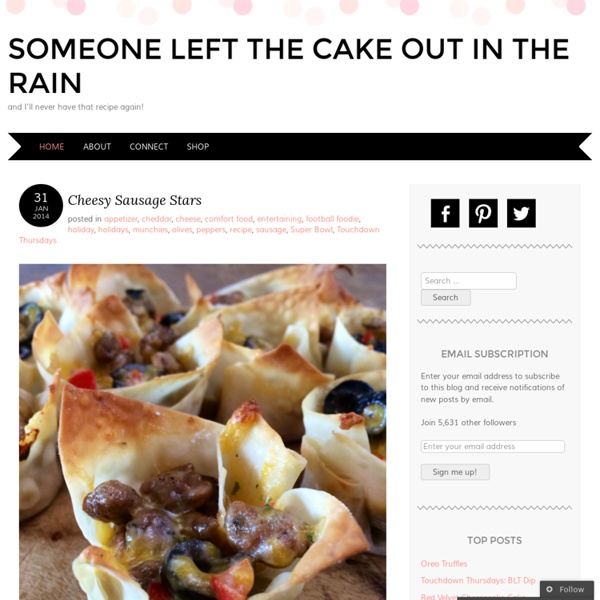 How To Cook Like Your Grandmother - StumbleUpon I’ve tried lots of brownie recipes: Boxes, scratch, frosted, plain, nuts, chips, fudge … Each of them has something to like, but depending on my mood I might want a change of pace. Not any more. My wife found this recipe, and it’s perfect. I’m done looking. This is the brownie recipe that I’ll use from now on. Blueberry Martini Jello Shots – NYC Blueberry Martini Jello Shots My friend Chris invited me to a barbecue last weekend, and wanting to be a good BBQ guest like Deb at Smitten Kitchen, I offered to bake a pie. It turns out, though, no one who was attending the BBQ was very excited at the prospect of pie.

Visiting 10 of the Most Interesting Abandoned Places on Earth Travelers looking for a getaway from the normal getaway should skip the sandy beaches to walk amid silent relics in Namibia, Chernobyl or an abandoned California gold mining town. These empty places may look like Scooby Doo set pieces, but they hold important clues to bigger mysteries about both the past and the future; the creep of urban decay and the necessity of memorializing tragedy. Sometimes history lives alone. We bring you 10 modern ghost cities where you can choose your own adventure, exploring what once was and what could have been. Hashima Island, Japan

Red Velvet Cake in a Jar What happens when you take the classic flavor of red velvet cake, zap it in the microwave in under two minutes, then serve it layered with nutella and cream cheese frosting in a jar? I’d tell you, but since making a batch of such cakes myself, I’ve been living on a golden cloud while a shirtless Fabio feeds me grapes and escargot. Dreamy, people. That’s what this cake is. Rum and Caramel Banana Cream Trifle Rum and Caramel Banana Cream Trifle ~ Rum, banana cream filling, toasted pecans and coconut, salted caramel buttercream, chocolate sauce-are you feeling fat and happy yet? Well, I certainly was after this concoction that pretty much combines some of my favorite flavors. Rum and Caramel Banana Cream Trifle I’m a huge fan of easy desserts that require little work and lots of stacked flavors that can be composed as high as my serving vessel will allow me. Did that just make me sound like a total lazy over indulger or what?

Family Kitchen - StumbleUpon Bring Your Child's Favorite Characters to Life with These Disney-Themed Lunches Healthy Mickey-Shaped PB&J Muffins: A Breakfast the Whole Family with Love A Yummy Instant Pot Chicken and Rice Recipe Even the Pickiest Eaters Will Love This 3-Ingredient Coffee Fudge Is the Best Morning Pick-Me-Up Unfettered F-U-N . . . Rainbow Jelly Shooter! Rainbow Jelly Shooter Its been a whirlwind at the test kitchen. The book is progressing (crossing fingers that it is going to press in early December!), we have been working on a little something (three little somethings, actually) for Saveur.com, and about a million more actions items cropping up here and there, many of which have not received appropriate attention and are currently housed in a bin marked "anxiety provoking". One of the highlights of our week was a lovely chat with Erin over at Tablespoon.com, who mentioned that they were hosting a Double Rainbow Week, which sounded like such fun! (And it IS - featured items include double rainbow . . . donuts!

Lesson Plan for Making a Speaker Laboratory ©1995 The Regents of the University of California by Regan Lum Introduction: