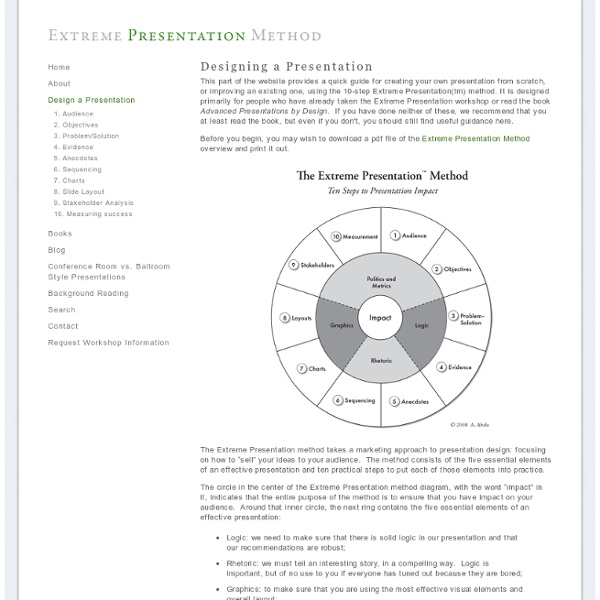 The Extreme Presentation(tm) Method The most popular thing we've ever posted on this blog has been, without doubt, the Chart Chooser. Available in nine different languages, the Chart Chooser has been featured in numerous books on presentation and data visualisation, and continues to serve as a very simple but effective tool for choosing a good chart. We have applied the same idea to the question of chosing different slide layouts, so here is the new Slide Chooser(tm). It works the same way the Chart Chooser does. You can download the Slide Chooser here as a single, two-page pdf: Download Slide Chooser 2 pager Over the years I have shared these designs with my friends at Microsoft and at Powerframeworks.com, so all of the actual layouts are available either as SmartArt diagrams in PowerPoint and/or from PowerFrameworks.com as individual .ppt and .pptx files. An earlier version, laid out on a single, 11 x 17" (A3) sheet, looks like this: You can download this larger, single page version here: Download Slide Chooser 11x17

16 Awesome Data Visualization Tools From navigating the Web in entirely new ways to seeing where in the world twitters are coming from, data visualization tools are changing the way we view content. We found the following 16 apps both visually stunning and delightfully useful. Visualize Your Network with Fidg’tFidg’t is a desktop application that aims to let you visualize your network and its predisposition for different types of things like music and photos. Currently, the service has integrated with Flickr and last.fm, so for example, Fidg’t might show you if your network is attracted or repelled by Coldplay, or if it has a predisposition to taking photos of their weekend partying. See Where Flickr Photos are Coming FromFlickrvision combines Google Maps and Flickr to provide a real-time view of where in the world Flickr photos are being uploaded from. BigSpy places stories at the top of the screen as they are dugg. Swarm visualizes stories with circles that grow and become brighter in color as they receive more diggs:

10 Best Data Visualization Projects of the Year – 2010 Data visualization and all things related continued its ascent this year with projects popping up all over the place. Some were good, and a lot were not so good. More than anything, I noticed a huge wave of big infographics this year. It was amusing at first, but then it kind of got out of hand when online education and insurance sites started to game the system. Although it's died down a lot ever since the new Digg launched. That's what stuck out in my mind initially as I thought about the top projects of the year. One of the major themes for 2010 was using data not just for analysis or business intelligence, but for telling stories. So here are the top 10 visualization projects of the year, listed from bottom to top. 10. Scott Manley of the Armagh Observatory visualized 30 years of asteroid discoveries. 9. Hannah Fairfield, former editor for The New York Times, and now graphics director for The Washington Post, had a look at gas prices versus miles driven per capita. 8. 7. 6. 5. 4. 3.

15 Stunning Examples of Data Visualization Data Visualization is a method of presenting information in a graphical form. Good data visualization should appear as if it is a work of art. This intrigues the viewer and draws them in so that they can further investigate the data and info that the graphic represents. In this post there are 15 stunning examples of Data Visualization that are true works of art. Click on the title or image for a larger view of each visualization. The Strengths of Nations Here’s an image that discusses the variations in how different nations pursue science. Madrid.Citymurmur CityMurmur tries to understand and visualize how media attention reshapes the urban space and city. Genome Jules & Jim This visual represents the relationship between characters in the movie Jules & Jim. One Week of the Guardian This is one day in a series that takes the news from one week of the Guardian newspaper, and visually represents it as a series of static visualisations. One Week of the Guardian Leisure & Poverty Stock Data Related Posts

8 Ways of visualizing the news When journalists first began using Flash to produce multimedia stories, it changed the way news could be displayed. Hyperlinks and long blocks of text still exist (in a much cleaner form), but they are now supplemented by the new form of storytelling. The following news aggregators are the next step in the visualization of news and how users will interact with content in the future. 1. the photo stream Instead of displaying the news as a series of headlines and links, the photo stream simply displays news photos aligned in a eye-pleasing grid. 2. There are multiple ways of digesting the news at Newser, but the centerpiece of the site is its tiled news headlines. 3. MSNBC.com has taken its RSS feeds and turned it into Spectra, a visual newsreader that adds a little color to the news. 4. NewsWorldMap mashes up a full browser Google map of the world with Google News and GeoNames to create an interactive way of searching for news in a specific country. 5. 7. 8.

The Best Free Software of 2010 Get what you DON'T pay for: Here are 196 programs that cost nothing but will make your computing life richer—all while keeping your wallet fat. We don't want to make you feel bad, but, uh... are you really still paying for software? Wow. Well, we're here to spread the word: There's no lack of free software to be found online. Some of it is as powerful, if not more so, than the name-brand packages found on shelves at Best Buy for big bucks. Knowing all this, every year PCMag puts together a fresh look at the Best Free Software. In addition, we know there's plenty of free software available for smartphones, so we've made a notation if the app has a mobile component, but we'll leave the full list of no-cost apps for your phone to our mobile experts (See "The Top 100 Free Apps for Your Phone.") Did we miss any great no-cost programs? In This Story: