GravityLight: lighting for the developing countries 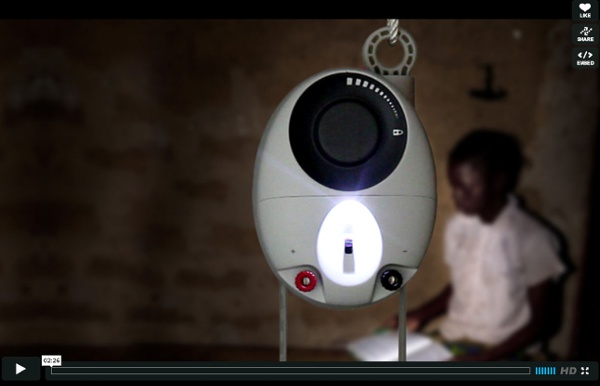 How to Build a Rocket Stove Living Published on September 26th, 2011 | by Jeff McIntire-Strasburg UPDATE: Added another plan to the list… this one made from tin cans. Just back from a weekend trip up to the Dancing Rabbit Ecovillage, and between board meetings, was able to join in with the community’s annual open house and Village Fair. I’m really intrigued by this beautifully simple concept, created by Dr. Looking for an alternative to the traditional outdoor barbecue grill, or even for heating your home (at least partially). 1. This one requires no more than stacking some bricks… though I’m guessing they would need to be made of a material like adobe (for the insulative properties). 2. You’ll need just a few more materials for this one from the Aprovecho Research Center, but it’s still pretty simple… 3. If you’re interested in something closer to the look of a conventional barbecue grill, this plan by the folks at Root Simple may be just the ticket. 4. 5. #6 The tin can rocket stove (10/1/11) And a bonus…

Break Line: Stephanie Gilmore Slicing her way through breaking waves, professional surfer Stephanie Gilmore stars in Trestles Forever, filmed on the Pacific Ocean by NOWNESS regular Todd Cole. The 24-year-old Gilmore rose to international prominence in 2007 when she seized the Women’s World Title for the first time, an award she has regained in four of the five years since. “I love working with people from outside the world of surfing,” says the New South Wales native. Location The Trestles, San Diego County. Shoot duration One day; a few hours in the morning, then off on a boat looking for clear pools of water, and then another hour of surfing at sunset. Number of waves surfed 16. Number of surf choreographers used One: Sonny Miller. Camera s Two Arri 16mm film cameras in custom-made underwater housings. Food consumed on set Bagels and cream cheese, chips, guacamole and salsa. Drink consumed on set Water, coconut water and some tequila at the end of the day. Approximate calories burned surfing 1,428. StylingKris Zero.

India wins the Ashden Prize for making charcoal without wood. The Ashden Award is the greatest prize that exists for innovative work concerning the environment in the Third World. Dr. A D Karve on behalf of ARTI, Pune walked up recently to receive the prestigious Rs.20 lakhs award at a ceremony in the UK. Priya plays with cane leaves: Actually the adventure began with Anand Karve's adoring daughter, Priyadarshini in 1996. Priya tried shredding and briquetting leaves in general in order to create fuel pellets. Priya's academic pursuits distracted her for a while and there the matter stood until she finished her doctoral thesis in physics. Char it! Back to our story now. But the gritty cane leaf stood defiant. The breakthrough came when they thought of packing the leaves tightly in a retort [which is really a can with a lid]. A rural business system: The kiln itself was designed to be hand made and small enough for a farmer's backyard. After a 45 minute firing, the stuff inside the kiln is easily pulverised with a light roller. Reversed flow:

Demon Days: Alvin Leung Amid tentacles and open flames, the self-professed “Demon Chef” Alvin Leung reveals a wicked palate and a penchant for carnal creations in this short by filmmaker Ryan Hopkinson. Born in London and raised in Toronto, Leung rose to prominence in Hong Kong, becoming known for what he calls “X-treme Chinese” cuisine, a far-out technique that harnesses the futuristic appeal of molecular gastronomy alongside the wide reach of fusion. The incendiary results both morph traditional Chinese recipes into kinky culinary experiences, and tackle off-the-plate issues: the self-taught chef’s signature dish, Sex on the Beach, serves up an edible “condom” on a shitake beach, created to raise funds and awareness for AIDS charity. With all the different genres of cooking out there today, why choose “X-treme Cuisine”? I want to give people something more than tags like fusion, molecular or modern contemporary. What inspires your X-treme recipes? How might you adapt a classic, familiar dish?

Eco-Living: How to Make a "Cool" Solar Oven from Scrap For those of you into "eco" projects, here's a good one. This little baby works on the same principle as the solar tower, but on a much smaller scale. I was in Colorado a few summers ago. There are a million variations on the solar oven, but I wanted to go simple. Basically this is a box with a clear cover that has a lot of light shining into it. Here's how I made it. * Wood: I went out and bought some plywood, marked it off and cut it down with a jigsaw to make the rudimentary sides of your typical six-sided rectangular box. * Hinges: See IMAGE 2. * Tin Foil & Glue: Next I got some glue and covered the flipper tops with a thin coating of glue, over which I stretched sheets of tin foil (aluminum foil is OK, too) with the shiny side facing outward. * String and Eye-Hooks: Look at the pictures and you will see some string floating around here and there. * Plexiglas & Foam Liner: I cut a piece of Plexiglas out that fit perfectly on the top edge of the box. * Black Spray Paint: See IMAGE 3.

Sigur Rós: Valtari The Restaurateur Makes His London Debut With a New Sex Shop Fronted Mexican Joint Chorizo, lobster and lime reveal their unexpectedly lascivious side in still life photographers Metz + Racine’s saucy homage to London’s newest hotspot, La Bodega Negra. Using a color palette and mini-sets inspired by the Mexican architect Luis Barragán, Metz + Racine enlisted ingredients from the eatery’s menu. Hidden in a Soho basement behind a sex shop entryway that nods to the neighborhood’s notoriously kinky past, the restaurant offers an unabashedly large tequila selection, plenty of dimly lit corners and Mexican staples like ceviche, tacos and tostados, in addition to grill items like lamb barbacoa. (There is a to-go option from a more casual, upstairs taqueria). What are the crucial components of an excellent Mexican meal? The heart of the cuisine is the salsa. The space has some really playful elements, but also lots of moody, dark alcoves. How does the restaurant scene here differ from New York?

How to Build a Hot Tub I have lived in the Pacific Northwest with its cool, damp winters for more than 20 years, and I always wanted to build a hot tub. I wasn’t interested in one of the popular jetted tubs because their cost is prohibitive, the pump noise and vibration are bothersome, and the chemicals used to keep the water free of bacteria are a turnoff. The idea of using a stock-watering tank for a DIY hot tub project has been around for a long time, but all of the ones I’d seen were pretty unattractive. I wanted a setup that was nice-looking, easy to use, and economical. My hot tub dreams came together when I discovered a wood-fired spa stove made in Japan by a company called Chofu and imported by Island Hot Tub Co. Soaking in a Wood-Fired Hot Tub Unlike a commercially available tub that only requires you to plug it in and set a timer, you’ll be more involved in the operation of your wood-fired soaking tub. Heating and Maintaining the Water The tub I chose holds 100 gallons if filled to the brim. 1. 2. 3.

Divine Proportions Saudi Arabian basketball players and Qatari swimmers feature in Brigitte Lacombe’s striking portraits of Arab women in sport. Commissioned by the Qatar Museums Authority, Brigitte and her sister, the documentary filmmaker Marian Lacombe, stayed at the pre-Olympic Arab Games in Doha for ten days last December to find their subjects. Traveling extensively around the Arab world, visiting Qatar, Morocco and Saudi Arabia, Lacombe photographed athletes who were often from economically deprived or war torn countries. “The young girls and women athletes we met were spirited and full of joy,” says Lacombe. “For them to arrive at this level of excellence requires extreme determination to overcome resistance––not only cultural, but economic and political.” Hey’Ya: Arab Women in Sport by Brigitte Lacombe and Marian Lacombe is running at Sotheby's London from July 25 to August 11, traveling to the Q.M.A.

Composting greenhouse provides hot water (original) The original content of this page, "Composting greenhouse provides hot water (original)", was authored by Ole Ersson, and was written from his point of view. It was ported with permission from Experiments in Sustainable Urban Living. Bales Our household of 2 adults and three children obtained all our household hot water from a composting greenhouse we constructed in Portland, Oregon in 1994. The strawbale floor The greenhouse design was similar to inexpensive "tube" greenhouses. Pipe supports for the roof Two PVC 3/4 inch water lines ran underground from the house to the greenhouse. Plans in the greenhouse The total amount of hot water contained in the hose inside the compost (comprising a cylinder 100 feet long by 1.5 inch diameter) was 9.17 gallons. Roof over greenhouse The compost biomass consisted of wood chips and other ground tree material run through a chipping machine.

Rocket stove A small manufactured rocket cooking stove A rocket stove A rocket stove is an efficient cooking stove using small diameter wood fuel which is burned in a simple high-temperature combustion chamber containing a vertical chimney and a secondary air supply which ensures almost complete combustion prior to the flames reaching the cooking surface. The principles were described by Dr. Larry Winiarski from Aprovecho in 1982 and stoves based on this design won Ashden Awards in both 2005 and 2006. Interest in rocket stoves has led to the development of rocket mass heaters and other innovations. Design[edit] A rocket stove achieves efficient combustion of the fuel at a high temperature by ensuring a good air draft into the fire, controlled use of fuel, complete combustion of volatiles, and efficient use of the resultant heat. A rocket stove's main components are: The fuel magazine can be horizontal, with additional fuel added manually, or vertical, with fuel automatically fed. Recent Adaptations[edit]

Wood Burning Heaters - Dragon Burners What causes wood smoke? Wood releases its volatile compounds when heated. Most of these compounds require at least 1,300°F to combust. A wood-fired combustion zone can be cooled to below the required temperatures for combusting smoke in a variety of ways. It follows, then, that the hotter the fire, the more complete the combustion, the higher the efficiency of the burn, and the less wood you have to chop. To insure a hot burn, the Dragon Burner primary combustion chamber (shown in the illustration as the horizontal tan component) is cast from an insulating refractory material. The importance of turbulence in burning wood The fire in the burn tunnel consumes the solids and releases the wood's volatile compounds. There is no smoke or pollution emitting from your stove pipe because all of the components of the wood are consumed. Burning Softwoods and Conifers Because the combustion process is so complete, you can use “pitchy” woods, such as pine, in your Dragon Heater. Using the heat

Team uses forest waste to develop cheaper, greener supercapacitors 10/23/2013 | Diana Yates, Life Sciences Editor | 217-333-5802; diya@illinois.edu CHAMPAIGN, Ill. — Researchers report that wood-biochar supercapacitors can produce as much power as today’s activated-carbon supercapacitors at a fraction of the cost – and with environmentally friendly byproducts. Any kind of wood can be made into biochar by heating in a low-oxygen chamber. Some types of wood work better than others. Pictured, left to right, are white birch, white pine and red cedar. | Photo by L. Brian Stauffer The report appears in the journal Electrochimica Acta. “Supercapacitors are power devices very similar to our batteries,” said study leader Junhua Jiang, a senior research engineer at the Illinois Sustainable Technology Center at the University of Illinois. “Supercapacitors are ideal for applications needing instant power and can even provide constant power – like batteries, but at lower cost,” he said. Editor's note: To reach Junhua Jiang, email junhua@illinois.edu.