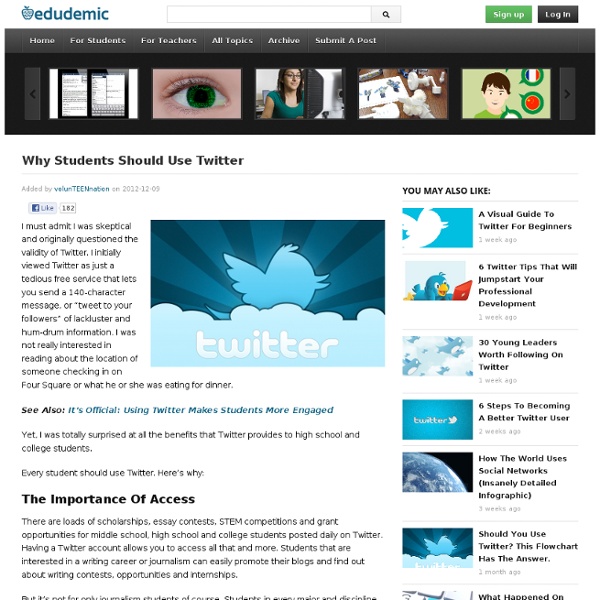 I must admit I was skeptical and originally questioned the validity of Twitter. I initially viewed Twitter as just a tedious free service that lets you send a 140-character message, or “tweet to your followers” of lackluster and hum-drum information. I was not really interested in reading about the location of someone checking in on Four Square or what he or she was eating for dinner. See Also: It’s Official: Using Twitter Makes Students More Engaged Yet, I was totally surprised at all the benefits that Twitter provides to high school and college students. Every student should use Twitter. The Importance Of Access There are loads of scholarships, essay contests, STEM competitions and grant opportunities for middle school, high school and college students posted daily on Twitter. But it’s not for only journalism students of course. Connect To A Wider Audience Twitter was launched in July 2006. Students Can Tweet For Good

Facebook privacy settings get reworked once again | Internet & Media Get ready -- Facebook is making changes to how users access its privacy settings, again. The social network hopes this latest overhaul will make the now bloated process easier to understand, according to a blog post today from Sam Lessin, a director of product for Facebook. The changes, which come a day after Facebook implemented its new privacy polices , are mainly cosmetic. Wrote Lessin: Everyone used to have a setting called "Who can look up my timeline by name," which controlled if someone could be found when other people typed their name into the Facebook search bar. Lessin said Facebook has outgrown the feature. Now, people can see profiles linked to friends' Timelines, relationship pages or tagged photos. According to Facebook, the search block feature has become more a crutch than a security tool. The idea is that while Facebook is taking away the ability to block searches, it's also shifting the responsibility of keeping users' information private to, well, the users.

How I Use Twitter In My Classroom My students hate writing, especially in math. To create a happy medium I decided to integrate the use of micro-blogging into my classroom to motivate my students to begin to at least use mathematical language in class. I thought this was going to be another project gone bad! To my surprise since teens love texting, they also loved micro-blogging! In our class we use Today’s Meet and Twitter as digital tools to encourage students to speak and write their mathematical ideas and thoughts. We have been using Today’s Meet, but recently started with Twitter. I created a class Twitter account and came up with 25 writing prompts for students to write on. The Steps Step 1: Create a class Twitter account. Step 2: Have students create an individual Twitter account. Step 3: Assign a time to integrate writing into the classroom. Step 4: Create prompts for your class to tweet on…Visit my blog for a list of Twitter Math Prompts. Tips: ~Protect your tweets and make them private. 1. 2. 3. 4. 5. 6. 7. 8.

50 Education Leaders Worth Following On Twitter How do you discover the education news and research that matters to you? Probably by curating a list of the top thought leaders, local people you want to keep track of, and a smattering of other helpful folks. But it’s not always easy to find the thought leaders from around the world you should be following. Whether you agree with what they’re saying, tweeting, or believing … their opinion matters to many. Administrators and Researchers Thomas Jefferson Middle School principal and Arlington County Principal Of the Year: Sharon Monde John Robinson Principal John Robinson loves discussing both policies impacting public schools and education technology from an administrative perspective. Education Technology Photos of elementary students using iPads at school to do amazing projects. Kevin Corbett This developer and educator focuses on the learning potential of games and social media, sharing expert advice and articles he believes will push the boundaries of tech in the classroom. Higher Ed

Twitter to fight hacking by boosting login security | Technology Twitter plans to introduce a "two-factor authentication" option that would make it impossible for hackers or vandals to break into accounts – even if they acquired the passwords. The "2FA" system, which is also offered as an option by Google for its Gmail email system, blocks access from new devices or internet addresses, even when using the correct password, unless accompanied by a short numerical code that is sent separately to the account owner's mobile phone. The news comes just days after the company reset the passwords on at least 250,000 accounts, after hackers broke into its systems and were suspected of accessing users' data, including email addresses and encrypted passwords. Two-factor authentication adds an extra layer of safety to any service, as well as effectively alerting the true owner when attempts are made to hijack the account. Graham Cluley, senior technology consultant at the security company Sophos, said: "This is a splendid idea – I'm looking forward to it.

5 Great Cheat Sheets Teachers should Not Miss After the Twitter Cheat Sheet I posted yesterday, I got emails from some of you asking If I have any other sheets to share post here . I do have some saved ones I bookmarked from different websites and in particular from Mashable. I personally love Cheat Sheets because they present information in a visually attractive way which can be very helpful especially for visual learners.And just like Infographics,Cheat Sheets can also give users a simple rundown of various features accompanied by an explanation on how to use them. Without any further ado, below is a set of some of the best Cheat Sheets online. Click on any title to download and access the original copy. 1- Google Plus Cheat Sheet 2- Facebook for Newbies Cheat Sheet 3- Twitter Newbies Cheat Sheet 4- Manners Cheat Sheet 5- Social Media Keyboard Shortcuts

100 Simple Ways To Effectively Use Twitter Twitter is too big to ignore. You see hashtags in commercials, sponsored tweets, posts, news broken on Twitter, etc. It’s quickly become an indispensable tool for teachers, admins, parents, and students too. Right now, there are still many (MANY) in education not using Twitter. They may think it’s tough to start using, difficult to monitor, and even a waste of time. But what if they had a categorized list of the top tips to help you use Twitter ? See Also: It’s Official: Using Twitter Makes Students More Engaged From how to follow people to asking for help to the best tools to use , it’s all here. Getting Connected With these tips and tools, you’ll be able to get connected with the people that matter most to you on Twitter. Follow experts : Get useful information from other experts in your field. Search Put Twitter’s massive amounts of information to work by using these search tips and tools. Twitority : This search engine offers results based on Twitter users with authority. Organization

Facebook Launches Prevent Bullying Page Facebook continues to do its part to help stamp out bullying with Thursday’s launch of the Prevent Bullying page as part of National Bullying Awareness Month. The social network gathered together resources on the topic, including: A support dashboard where users can follow up on problem posts.A video outlining use of new tools from Facebook, including social resolution tools.Another video sharing successful stories from communities who are taking on the issue of bullying head-on.Links encouraging users to take the “Stop Bullying: Speak Up” pledge. Facebook said its new social resolution tools which debuted last year and were targeted toward 13- and 14-year-olds have seen a fourfold increase in users finding resolutions, with 81 percent expressing satisfaction with the experience. The social network also announced that it teamed up with the Ad Council on a new public-service announcement aimed at raising awareness of bullying and spurring bystanders to act.

Does Twitter Improve Education? cc licensed ( BY SD ) flickr photo shared by Ed Yourdon There has been post after post acknowledging how educators love Twitter while also encouraging others to use it themselves. With that though comes skeptics (as there should be), questioning whether the use of Twitter is beneficial to educators. I have thought about that question a lot and I can give a definitive answer: yes and no ( I am 100% certain of this). So to prove this, we have to look at a few things. First off, we have to look at how educators are using Twitter. Scenario A – Being on Twitter for the sake of being on Twitter When I first started Twitter, my first follows were my brother, Shaquille O’Neal and every other Laker related Twitter account I could find. Scenario B -Using Twitter to follow and learn from other educators So here is the thing when people that actually use Twitter challenge with the question, “does Twitter improve education?” If you are looking for a “number” as evidence, I don’t have one.

Sneak Preview: The Must-Have Guide To Educational Hashtags Wednesday, June 13, 2012 1:24 pm, Posted by Jeff Dunn | Social Media Topics: #edchat , guide , hashtags , How To , preview , tweets , twitter The following is an excerpt from tomorrow’s mega-post ‘ The 2012 A-Z Guide To Educational Hashtags ‘ so be sure to check back soon for the way-way-way-too-long article and directory to educational hashtags. We got so many additions and updates to our 2011 list we thought it was time to bring you the most up-to-date list for 2012. We went through all the comments on the 2011 version , wrote down all the Twitter and Facebook updates, and compiled this list over the course of several months. I’m sure we still missed some as new hashtags seemingly pop up every day. First, some background to get you up to speed on what the heck a hashtag is. First, What’s A Hashtag? Whether you’re a new or seasoned Twitter user, you likely come across confusing hashtags that probably look like a bunch of nonsense. How To Hide Your Hashtag Chat From Followers Sources

New Tech Institute students use social media to share views on debate EVANSVILLE — Using the Twitter hashtag #myparty12, a group of 30 students from the Evansville Vanderburgh School Corp.'s New Tech Institute gathered Wednesday night to watch the 2012 Presidential debate, along with students at other New Tech schools throughout Indiana and across the nation. Early in the debate, social studies teacher Maryanne Mathews asked the group who they thought was winning, and multiple hands shot in the air for President Barack Obama, a Democrat, versus the handful that went up for his Republican challenger Mitt Romney. Along with tweeting, students were playing Bingo to certain phrases the candidates used, including 47 percent, free trade and Medicare. "They've really been listening to the issues, and they have their own take on them," Mathews said. Sixteen-year-old junior Jacob Fuchs attended because he wanted to be with fellow classmates while watching the debate to see which candidate he believed would be the best for the job. However, it was a unanimous "No!"

Our Biggest Twitter Tips For Teachers For many teachers making a foray into the edtech world, Twitter is an excellent tool for consuming and learning. There are a number of great resources out there to help teachers follow people who will be useful to them based on location, subject, grade level, and technology being used. Many are also harnessing Twitter as a part of their PLN (personal learning network) to connect, share, and network. So how do you bridge the gap from reading tweets in your feed to truly harnessing the power of Twitter in the edtech realm? Check out our biggest Twitter tips for teachers below! Create, Don’t Just Consume The best way to get the most out of Twitter is to use it. Connect and Network When you’re just getting started on Twitter (or perhaps trying to add to or refine your feed), a resource for educational hashtags or guides to great accounts to follow are excellent resources to point you in the right direction. Share Your Resources Keep At It