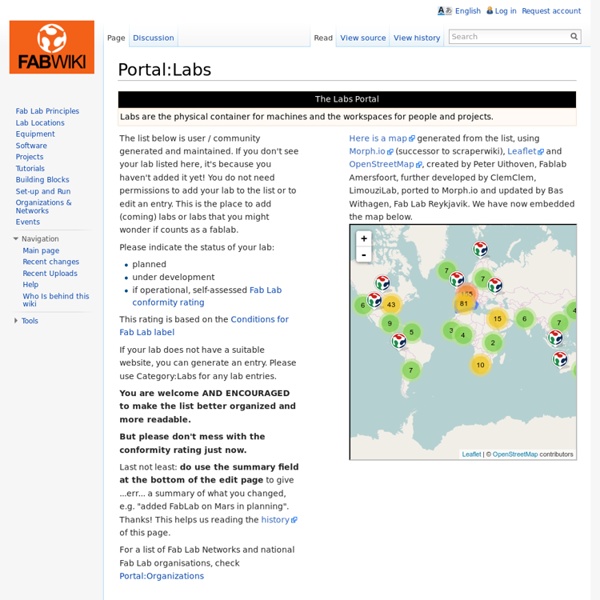 The list below is user / community generated and maintained. If you don't see your lab listed here, it's because you haven't added it yet! You do not need permissions to add your lab to the list or to edit an entry. This is the place to add (coming) labs or labs that you might wonder if counts as a fablab. Please indicate the status of your lab: planned under development if operational, self-assessed Fab Lab conformity rating

Cosmo Wenman Today's desktop 3D printers are more comparable to dot-matrix printers than high-dpi laser printers; there's a lot of room for improvement in the nascent but fast-growing technology. It's easy to imagine where that technology is headed: finer resolution printing, faster print heads, different materials, multiple colors. But that doesn't mean that the 3D-printed objects of today can't be more than disposable prototypes and knick knacks. It doesn't mean they can't be beautiful works of art.

The Fab Charter What is a fab lab? Fab labs are a global network of local labs, enabling invention by providing access to tools for digital fabrication What's in a fab lab? Fab labs share an evolving inventory of core capabilities to make (almost) anything, allowing people and projects to be shared What does the fab lab network provide? Operational, educational, technical, financial, and logistical assistance beyond what's available within one lab

Northampton Community College Serving the Lehigh Valley and beyond The Fee schedule is shown below and is subject to change without notice.Fees are payable at the time of service. Design Assistance: $60/hrNCC students: $40/hr One-On-One Instruction: $40/hr Tech Assistance (Set up and/or running equipment): $30/hr + Caboolture Fab Lab (CabFabLab) by Andrew Dahl A$75 + Reward approx C$78 One year membership of the Caboolture Fab Lab. Newsroom - Newsletters - Newsletter - November 2012 - International Fab Lab Association This is the November 2012 Newsletter of the International Fab Lab Association. It is an association of individuals interested in and/or involved in the Fab Lab community. It is a democratic organization run by its members. We will inform you about what is happening in the Fab Lab world and how you can participate. Feel free to forward this Newsletter!

+ Digital modeling and fabrication Digital modeling and fabrication is a process that joins design with the Construction / Production through the use of 3D modeling software and additive and subtractive manufacturing processes. These tools allow designers to produce digital materiality, which is something greater than an image on screen, and actually tests the accuracy of the software and computer lines. Computer milling and fabrication integrate the computer assisted designs with that of the construction industry. In this process, the sequence of operations becomes the critical characteristic in procedure. Architects can propose complex surfaces, where the properties of materials should push the design. Modeling[edit]

fab.cba.mit.edu/content/tools/ manages a facility for making and measuring things on length scales from atoms to buildings. Rather than requiring user fees, it is funded by CBA’s , with additional available time shared with collaborating programs. The tools are grouped by capabilities. Nano (nanometers) Dota 2 Workshop - Technical Requirements Technical requirements for items Below you'll find all the technical information you'll need in order to create a valid item. However, technical requirements are only a small part of creating a successful item.

Lagos of the future: Megacity's ambitious plans For decades, residents in Makoko have boarded wooden canoes to navigate through a labyrinth of narrow waterways crisscrossing a floating shanty town perched on stilts above Lagos Lagoon's murky canals. Lacking access to basic infrastructure, including clean drinking water, electricity and waste disposal, and prone to severe environmental and health hazards, Makoko is one of the many chaotic human settlements that have sprouted in Lagos in recent years. Its makeshift shacks shelter thousands of people fighting for space in one the world's most crowded cities. But in late July, scores of Makoko dwellers were left homeless after Lagos authorities swooped into the low-lying coastal community and demolished many of the community's houses and other illegal structures. Officials cited security concerns for the operation -- the water village had grown dangerously close to a major bridge and the electrical towers surrounding it.