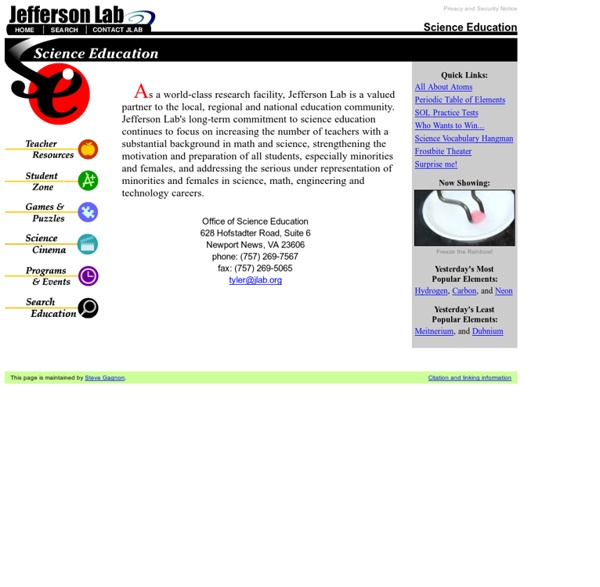 Home Common Compound Library A searchable database of over 800 common compound names, formulas, structures, and properties. Companion Notes Hyperlinked notes and guides for first semester general chemistry. Construction Kits Flash-based kits for building chemical formulas, names, equations, and problem solutions. Articles Featured articles, books, and tutorials. Toolbox Interactive graphing, popup tables, and calculators. Tutorials Index of self-guided tutorials, quizzes, and drills on specific topics. OLogy - AMNH's Science Website for Kids Fireflies aren't flies at all. They're beetles! Bats are the only mammals that can truly fly. Antarctica is a continent surrounded by ocean. The Arctic is the opposite, an expanse of ocean surrounded by continents. Half a million neurons form every minute during the first five months in the womb.

MetEd » Home Homeschool Science Education Click here to Reserve your Spot! for the 2014 live California Science Camp! Your kids can do science with Aurora while YOU relax, enjoy, and vacation in paradise! Join me for a summer filled with real science your kids will never forget! This summer, I will be teaching a live, 5-day science camp in San Luis Obispo, California. (San Luis Obispo was recently named the "Happiest City in America") Trying to figure out what to do this summer that's going to be fun for the whole family? Special Bonuses for the First Ten Families who sign up: Total Value: Over $350 of free bonuses if you're one of the FIRST 10 to sign up for Supercharged Science Camp! What ages is Science Camp for? Supercharged Science Camp is open to kids ages 7-12 years. How much does the camp cost? While I personally teach the camp myself, your kids will also be well supported by my team of assistant teachers through every step of every activity. That's less than $18 per hour of camp! NO!! YES! YES!!! What if I change my mind?

bj's MST The Most Unforgettable Space Shuttle Pictures Photograph from NASA via Reuters Sitting on a rolling platform, the space shuttle Challenger emerges from the mist at Kennedy Space Center in Florida as it heads toward the launch pad, just visible in the distance, in November 1982. Challenger lifted off on its maiden voyage in April 1983 for the sixth shuttle mission. When the space shuttle Atlantis lands on Thursday, it will wrap up STS-135, the final shuttle mission in the U.S. program's 30-year history. Even with the tragic losses of Challenger and Columbia , the space shuttle has become an icon among U.S. science and technology achievements. "The space shuttle has been with us at the heart and soul of the human spaceflight program for about 30 years, and it's a little sad to see it go away," STS-135 mission commander Christopher Ferguson recently told reporters in a televised interview from the ISS. "It's going to be an emotional moment for a lot of people that dedicated their lives to the shuttle program for 30 years.

Inquiry in Action | Download Free Science Activities, Find information on Workshops, Learn Chemistry Fundamentals Under the Microscope In Your Food The Science House | NC State University Nature's Living Tape Recorders May Be Telling Us Secrets : Krulwich Wonders… Back in the 1930s there was a bird, an Australian bird, who had this thing for a human lady. The lady's name was Mrs. Wilkinson (I couldn't find her first name) and she lived in Australia. So did the bird. It visited her daily for food. Adam Cole/NPR When James the bird decided to woo Mrs. According to those who were there, on one occasion James sang for 43 minutes. These birds are amazing. Chook lived in a cage next to a panda exhibit while it was under construction so presumably that's how he learned to do perfect renditions of hammers, power drills, and car alarms. For example, when the BBC's David Attenborough ran into a lyrebird deep in the Australian woods, the bird not only sang the songs of 20 other forest birds, it also did a perfect imitation of foresters and their chainsaws, who apparently were getting closer. These birds were, in effect, recording the sounds of their own habitat destruction. Are Lyrebirds Accidental Historians? Well, maybe.