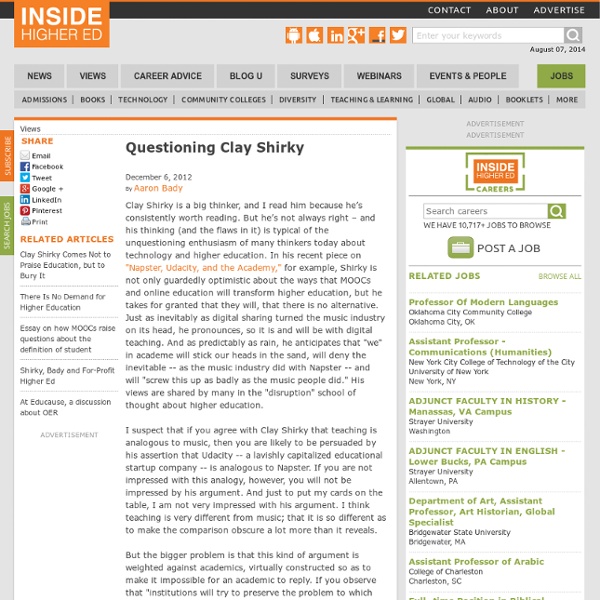 Clay Shirky is a big thinker, and I read him because he’s consistently worth reading. But he’s not always right – and his thinking (and the flaws in it) is typical of the unquestioning enthusiasm of many thinkers today about technology and higher education. In his recent piece on "Napster, Udacity, and the Academy," for example, Shirky is not only guardedly optimistic about the ways that MOOCs and online education will transform higher education, but he takes for granted that they will, that there is no alternative. Just as inevitably as digital sharing turned the music industry on its head, he pronounces, so it is and will be with digital teaching. And as predictably as rain, he anticipates that "we" in academe will stick our heads in the sand, will deny the inevitable -- as the music industry did with Napster -- and will "screw this up as badly as the music people did." His views are shared by many in the "disruption" school of thought about higher education. Related:  media about

Essay on how MOOCs raise questions about the definition of student Clay Shirky and Jay Rosen have popularized the phrase “People Formerly Known as the Audience” to describe the evolution of contemporary media consumers from mere listeners or viewers into interactive and demanding participants. A similar redefinition of roles is emerging in conversations about the consumers of massive open online courses. With a student-faculty ratio of, in some cases, 150,000: 1, the teacher of a MOOC may well struggle to define his or her relationship to an audience of course-takers who do and do not resemble traditional "students." In a recent Twitter exchange, media scholars Siva Vaidhyathan and Cathy Davidson debated the question of whether people enrolled in a MOOC are accurately described as “students.” @CathyNDavidson asked, "Are they really all 'students' or merely 'registrants'?" Coursera, Udacity and Khan Academy themselves consistently refer to their participants as "students." Some promising models for non-instructor-based interaction are emerging.

IHE: How open are MOOC's ? DENVER — MOOCs are on the tip of everyone’s tongue here at the annual Educause meeting, presumably because of their scale and the technologies their recent champions have built to support that scale. But in his opening keynote, Clay Shirky, an author and assistant professor at New York University, said the most provocative aspect of MOOCs is not their massiveness; it is their openness. Or, in some cases, their lack thereof. Shirky’s framing of MOOCs as a phenomenon of the open educational resources (OER) movement -- rather than of the online education or instructional technology movements -- comes shortly after Coursera struck a content licensing deal with Antioch University that drew a line on the extent to which the company would allow outsiders to use its resources without paying to do so. The missing piece is a caveat in Coursera’s terms of service that prohibits the use of Coursera’s MOOCs for anything but informal education. So are MOOCs, and the content packaged therein, OER?

Online courses need human element to educate Online courses are proliferating, says Douglas Rushkoff, but will really succeed when they bring humanity to learning process Douglas Rushkoff: Education is under threat, but online computer courses are not to blameHe says education's value hard to measure; is it for making money or being engaged?He says Massive Open Online Courses lack human exchange with teachersRushkoff: MOOCs should bring together people to share studies, maintain education's humanity Editor's note: Douglas Rushkoff writes a regular column for CNN.com. (CNN) -- Education is under threat, but the Internet and the growth of Massive Open Online Courses are not to blame. Like the arts and journalism, whose value may be difficult to measure in dollars, higher education has long been understood as a rather "soft" pursuit. What is learning, really? Douglas Rushkoff Education is about more than acquiring skills. What we consider basic knowledge has grown to include science, history, the humanities and economics.

Why Things Matter The Virtual Revolution Doug Rushkoff on 'free' Open online courses – an avalanche that might just get stopped These days there are plenty of prophets preaching hi-tech and digital solutions to the problems of expanding access to knowledge and higher education. Barely a week goes by without some new hymn to education technology, open-source software or open-access publishing. In the US, the growing chorus for online education through massive open online courses, or moocs, has been deafening. But in Britain, it has barely registered. Last December, the commercial launch of the Open University's mooc platform, FutureLearn, attracted the participation of a dozen universities and the support of David Willetts, but little response from Britain's beleaguered academics. No wonder that last month Sir Michael Barber, the chief education adviser of Pearson, the world's largest profit-making education provider, proclaimed that universities were powerless to stop the online avalanche. Historically, the University of California has often proved a weathervane for global trends in higher education.

"The key difference between academics and venture capitalists, in fact, is not closed versus open but evidence versus speculation. " by notpicnic Dec 6