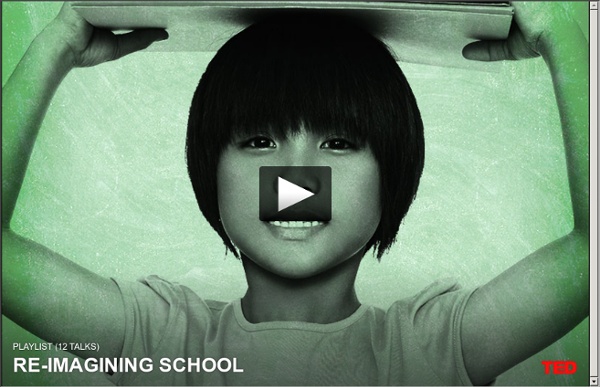 x Innovations Each month, we'll be highlighting 5 great innovations and ideas bubbling up from the TEDx community -- both in a newsletter, and here on the TEDx site. If you have an innovation to share, email tedxstories@ted.com. All active TEDx licensees receive the TEDx Monthly Innovations Newsletter. If you would like to receive the monthly TEDx Innovations newsletter, click here to sign up. TEDxYouth@SanDiego mixes it up What Schools Can Learn From Google, IDEO, and Pixar A community about to build or rehab a school often creates checklists of best practices, looks for furniture that matches its mascot, and orders shiny new lockers to line its corridors. These are all fine steps, but the process of planning and designing a new school requires both looking outward (to the future, to the community, to innovative corporate powerhouses) as well as inward (to the playfulness and creativity that are at the core of learning). In many ways, what makes the Googles of the world exceptional begins in the childhood classroom -- an embrace of creativity, play, and collaboration. It was just one year ago that 1,500 CEOs identified creativity as the number-one leadership competency in our complex global marketplace. We can no longer afford to teach our kids or design their schoolhouses the way we used to if we’re to maintain a competitive edge.

Why We Need to Redefine Intelligence - HBR IdeaCast An interview with Scott Barry Kaufman adjunct assistant professor of psychology at New York University and author of Ungifted: Intelligence Redefined. Download this podcast SARAH GREEN: Welcome to the HBR IdeaCast from Harvard Business Review. I’m Sarah Green. Sugata Mitra Recruit partners in the areas of technology, architecture, education and strategy to help design and build Schools in the Cloud of varying bandwidth and resources. Create the Granny Cloud, a global network of educators and retired teachers who can support and engage the children through an online School in the Cloud learning platform. Engage communities, parents, schools and afterschool programs worldwide to transform the way kids learn, by sharing the Self Organized Learning Environment (SOLE) toolkit with them, along with how-to videos and educational resources. In November 2013, the first School in the Cloud—located inside a high school in Killingworth, England—opened its doors to students.

Infographic of the Day: Even Poor Countries Can Excel in Education Sitting comfortable in our first-world lives, it's easy to assume that we've got the best of everything. And it's easy to assume that problems of infant mortality, hunger and education are simply a matter of having a roaring GDP. But that's not true at all, as these remarkable interactive graphs show. Produced by The Guardian and the Gates Foundation, the charts are draw from the Millennium Development Report Card. Learning Theories Every Teacher should Know about Have you ever asked yourself what learning theories you know about and which ones you feel more connected to and apply in your teaching ? Generally speaking, theories inform and guide practice in any content area and a learning theory is a set of concepts on how people learn. It is more or less an investigation of the strategies and the underlying cognitive processes involved in learning. The educational field abounds in learning theories to the extent that it becomes hard to draw clear boundaries between some of them. The graphic I have for you below provides a clear categorization of the learning theories you need to know as a teacher and educator. Check it out and as always share with us your feedback.

NAP Members Area: EDEN Secretariat's blog: Living in the age where "knowing" may be obsolete Interview with Sugata Mitra by Steve Wheeler The media and education worlds have been buzzing over the last few days about the work of a quiet, unassuming Indian born professor. Born in Calcutta in 1952, Sugata Mitra started his academic career in computational and molecular science. His later research also encompassed biological science and energy storage systems. Mitra has also researched diversely into areas such as medicine (Alzheimer’s disease and memory research) and psychology (perception in hypermedia environments) and he received a PhD in Physics for his studies into organic semi-conductors.

Redesigning Education: Building Schools for Science, Technology, Engineering, and Math "It is the tension between creativity and skepticism that has produced the stunning and unexpected findings of science." --Carl Sagan Not since the Soviets launched Sputnik into Earth's orbit in the 1960s has there been such urgency for America to redesign science and math education programs. Mental Models How do you think the most rational people in the world operate their minds? How do they make better decisions? They do it by mentally filing away a massive, but finite amount of fundamental, unchanging knowledge that can be used in evaluating the infinite number of unique scenarios which show up in the real world. That is how consistently rational and effective thinking is done, and if we want to learn how to think properly ourselves, we need to figure out how it's done. Fortunately, there is a way, and it works.

Can These Simple Cartoons Help Redesign Education? Were you bored in school? Guess what, so was Einstein! Does that make you a genius, too? Not likely, but according to a new project called Born to Learn, it does suggest that our educational practices might need a rethink. The project’s main thrust is a series of short, simple animations aimed at raising awareness about how the minds of young humans are "born to learn"--but not necessarily "be taught."