Joseph Conrad on Writing and the Role of the Artist 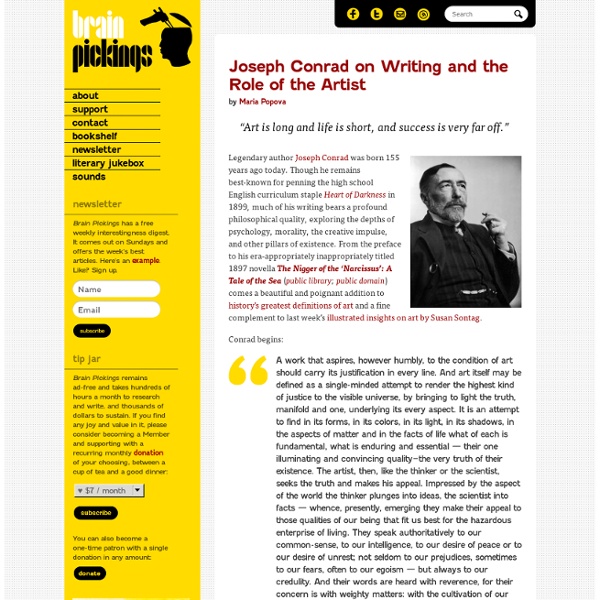 The Adverb Is Not Your Friend: Stephen King on Simplicity of Style by Maria Popova “I believe the road to hell is paved with adverbs, and I will shout it from the rooftops.” “Employ a simple and straightforward style,” Mark Twain instructed in the 18th of his 18 famous literary admonitions. Creativity Is Much More Than 10,000 Hours of Deliberate Practice In his new book "Peak: Secrets from the New Science of Expertise", psychologist Anders Ericsson and journalist Robert Pool distill an impressive body of research on "mastering almost any skill." Indeed, deliberate practice can help you master new skills. Deliberate practice involves a series of techniques designed to learn efficiently and purposefully. This involves goal setting, breaking down complex tasks into chunks, developing highly complex and sophisticated representations of possible scenarios, getting out of your comfort zone, and receiving constant feedback.

Questionnaires for Writing Character Profiles Enter your e-mail to get the e-book for FREE. We'll also keep you informed about interesting website news. "I have searched the web and used different worksheets, but none have come close to your worksheets and descriptions of (what to do and what not to do). Both courses I have taken have with Creative Writing Now have been amazing. 18 Quotes for Writers from Ernest Hemingway Today marks the 115th anniversary of Ernest Hemingway’s birth. In his lifetime, Papa had quite a lot to say about writing. Here are 18 of our favorite quotes, in no particular order.

What happens in the brain when you learn a language? Learning a foreign language can increase the size of your brain. This is what Swedish scientists discovered when they used brain scans to monitor what happens when someone learns a second language. The study is part of a growing body of research using brain imaging technologies to better understand the cognitive benefits of language learning. Tools like magnetic resonance imaging (MRI) and electrophysiology, among others, can now tell us not only whether we need knee surgery or have irregularities with our heartbeat, but reveal what is happening in our brains when we hear, understand and produce second languages.

History for Kids (Educational Videos for Students) Cartoons & Videos Upload Facebook Educational Videos for Students (Cartoons on Bullying, Leadership & More) Loading... Working... Nabokov on Inspiration and the Six Short Stories Everyone Should Read by Maria Popova “A prefatory glow, not unlike some benign variety of the aura before an epileptic attack, is something the artist learns to perceive very early in life.” “Show up, show up, show up,” Isabel Allende advised, “and after a while the muse shows up, too.” 7 Tenets of Creative Thinking In school, we learn about geniuses and their ideas, but how did they get those ideas? What are the mental processes, attitudes, work habits, behaviors, and beliefs that enable creative geniuses to view the same things as the rest of us, yet see something different? The following are seven principles that I've learned during my lifetime of work in the field of creative thinking -- things that I wish I'd been taught as a student. 1.

Things Writers Forget When Writing Fight Scenes Recently, I attended VCON, a science fiction and fantasy conference in Surrey (part of Metro Vancouver) and attended a session called “Writing About Fighting.” The panel consisted of writers and experts who were disciplined in multiple martial arts, including authors Lorna Suzuki and T.G. Shepherd, and Devon Boorman, the swordmaster of Academie Duello in Vancouver. The Heroine's Journey Inspiring Women on a Path of Wholeness and Sovereignty THE MAINSTAY of Victoria’s work is Empowerment for Women. Creative self-expression and authenticity are at the heart of her message.

Debunking the Eureka Moment: Creative Thinking Is a Process In 1666, one of the most influential scientists in history was strolling through a garden when he was struck with a flash of creative brilliance that would change the world. While standing under the shade of an apple tree, Sir Isaac Newton saw an apple fall to the ground. “Why should that apple always descend perpendicularly to the ground,” Newton wondered. “Why should it not go sideways, or upwards, but constantly to the earth’s center? Assuredly, the reason is, that the earth draws it.

Fictional Culture The way I build worlds is by collecting cool stuff from the history, myth and people around me. I blend these details with my own imagination, and create my own cultures. Culture is a vital part to realistic worldbuilding. Normally there are a few particular cultures that interest me at a given time. The key to storytelling is not your perfection but your humanity The Irish Times has a good, short piece on The Moth, the not-for-profit organization dedicated to the art and craft of storytelling. The Moth started in George Dawes Green's living room in 1997, but soon the storytelling club founded by Green started hosting events in cafes and clubs throughout New York City. The name "The Moth" came from the idea that people are attracted to stories the way moths are attracted to a flame.

Living in an Imaginary World When Rachel Stein (not her real name) was a small child, she would pace around in a circle shaking a string for hours at a time, mentally spinning intricate alternative plots for her favorite television shows. Usually she was the star—the imaginary seventh child in The Brady Bunch, for example. “Around the age of eight or nine, my older brother said, ‘You're doing this on the front lawn, and the neighbors are looking at you.