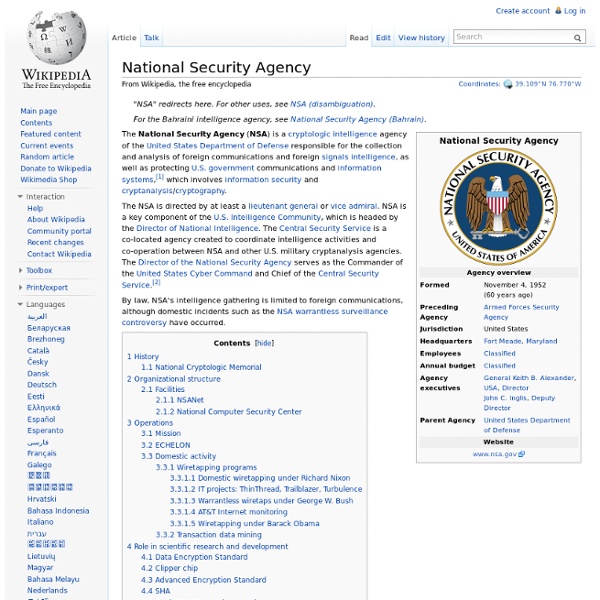 The National Security Agency (NSA) is a U.S. intelligence agency responsible for providing the United States government with encrypted communications (information assurance) and the reading of encrypted communications (signals intelligence) of other nations. The NSA also creates and maintains secure computer network operations for the U.S. Government and prepares for network warfare.[8] Originating as a unit to decipher code communications in World War II, it was officially formed as the NSA by President Truman in 1952. Since then, it has become one of the largest of U.S. intelligence organizations in terms of personnel and budget,[6][9] operating under the jurisdiction of the Department of Defense and reporting to the Director of National Intelligence. The NSA has been a matter of political controversy on several occasions in its short history. History[edit] Army predecessor[edit] Black Chamber[edit] Other so called Black Chambers were also found in Europe. Vietnam War[edit]

Edward Snowden comes forward as source of NSA leaks In an interview Sunday, Snowden said he is willing to face the consequences of exposure. “I’m not going to hide,” Snowden told The Post from Hong Kong, where he has been staying. “Allowing the U.S. government to intimidate its people with threats of retaliation for revealing wrongdoing is contrary to the public interest.” Asked whether he believes that his disclosures will change anything, he said: “I think they already have. Snowden said nobody had been aware of his actions, including those closest to him. “My sole motive is to inform the public as to that which is done in their name and that which is done against them,” he said in a note that accompanied the first document he leaked to The Post. The Guardian was the first to publicly identify Snowden, at his request. The White House said late Sunday that it would not have any comment on the matter. Although any extradition proceeding could take months or even years, experts said Snowden has not put himself in a favorable position.

Operation Paperclip Operation Paperclip was the Office of Strategic Services The Office of Strategic Services was a United States intelligence agency formed during World War II. It was the wartime intelligence agency, and it was a predecessor of the Central Intelligence Agency... (OSS) program used to recruit the scientists of Nazi Germany Nazi Germany , also known as the Third Reich , but officially called German Reich from 1933 to 1943 and Greater German Reich from 26 June 1943 onward, is the name commonly used to refer to the state of Germany from 1933 to 1945, when it was a totalitarian dictatorship ruled by... for employment by the United States in the aftermath of World War II World War II, or the Second World War , was a global conflict lasting from 1939 to 1945, involving most of the world's nations—including all of the great powers—eventually forming two opposing military alliances: the Allies and the Axis... (1939–45). (JIOA), and in the context of the burgeoning Soviet–American Cold War and the UK Dr.

Operation Paperclip Operation Paperclip (originally Operation Overcast) (1949–1990) was the Office of Strategic Services (OSS) program in which over 1,500 German scientists, engineers, and technicians from Nazi Germany and other foreign countries were brought to the United States for employment in the aftermath of World War II.[1] It was conducted by the Joint Intelligence Objectives Agency (JIOA), and in the context of the burgeoning Cold War. One purpose of Operation Paperclip was to deny German scientific expertise and knowledge to the Soviet Union[1] and the United Kingdom,[2] as well as inhibiting post-war Germany from redeveloping its military research capabilities. The Soviet Union had competing extraction programs known as "trophy brigades" and Operation Osoaviakhim.[3] Although the JIOA's recruitment of German scientists began after the Allied victory in Europe on May 8, 1945, U.S. President Harry Truman did not formally order the execution of Operation Paperclip until August 1945. Rocketry

"The Last North American Career Journalist" Al Giordano of Narconews has posted a brilliant and absolutely heartbreaking tribute to his friend and fellow authentic journalist, Gary Webb, here. One of the many goddamn shames about this tragedy is that Webb's death could come to overshadow his life and work. It's what happens with our slain heroes. Giordano does not question the verdict of suicide. An excerpt, but it deserves to be read as a whole: Gary never wrote with mere ink or pixels. Ruppert concludes: I am going to the funeral and I will be asking questions in Sacramento.

Operation Paperclip Operation Paperclip was the Office of Strategic Services (OSS) program used to recruit the scientists of Nazi Germany for employment by the United States in the aftermath of World War II. It was conducted by the Joint Intelligence Objectives Agency (JIOA), and in the context of the burgeoning Cold War. One purpose of Operation Paperclip was to deny German scientific expertise and knowledge to the Soviet Union[1] and the United Kingdom,[2] as well as inhibiting post-war Germany from redeveloping its military research capabilities. Although the JIOA's recruitment of German scientists began after the Allied victory in Europe on May 8, 1945, U.S. To circumvent President Truman's anti-Nazi order and the Allied Potsdam and Yalta agreements, the JIOA worked independently to create false employment and political biographies for the scientists. The Osenberg List[edit] Identification[edit] Beginning on 19 July 1945, the U.S. Capture and detention[edit] The scientists[edit] In May 1945, the U.S.

"A government 'op' that went wrong" There was a story a couple of days ago in The Salt Lake Tribune that deserves attention: Lawyer claims FBI informer linked to McVeigh bombing A Salt Lake City lawyer says an FBI informant who was an explosives expert might have trained accomplices of Oklahoma City bomber Timothy McVeigh at a white supremacist compound. Attorney Jesse Trentadue says two teletypes sent by the FBI's director show that an informer had infiltrated a paramilitary training compound in Oklahoma known as Elohim City and was there in April 1995 when one of the bombing suspects allegedly called looking for co-conspirators. The name of the informant and caller are blacked out, but Trentadue suspects they are Andreas Strassmeir, a German national who he says was the weapons and explosives instructor at the compound, and McVeigh, who allegedly was trying to recruit accomplices two weeks before the bombing of the Alfred P. Jones continues: Was Strassmeir an agent provocateur? The bomb was never meant to explode.

Operation Gladio B Operation Gladio B was an FBI codename adopted in 1997 for relations between US intelligence, the Pentagon, and Al Qaeda. The name refers to the original Operation Gladio, in which US intelligence had relations with anti-communist groups in Europe. According to Sibel Edmonds, Gladio B identified, among other things, meetings between US intelligence and Ayman al-Zawahiri in Azerbaijan between 1997 and 2001, with al-Zawahiri and other mujahideen being transported by NATO aircraft to Central Asia and the Balkans. These and related allegations were seemingly confirmed by Sunday Times journalists in 2008 by speaking to Pentagon and MI6 sources; however the journalists were prevented from publishing these allegations when the second half of their 4-part series was dropped.[1][2] References[edit] See also[edit]

The boy who cried Wolfowitz Some thoughts, now that Houston has not blown up, regarding German Guy. There's an interesting analysis here which suggests the posts were a backdoor, public yet deniable warning from German intelligence to the Wolfowitz network to back off possible "al Qaeda" attacks in Europe, or factions within the BND and other European intel agencies were prepared to disclose what they know of the complicity of American elements in 9/11. In this understanding the Houston scenario was always unlikely, and the purpose of the posts was to blackmail "the far side of the CIA and Mossad" to leave Germany alone. The poster makes a good case, and my thoughts had been running along similar lines. Ever heard the name Gregory Douglas? To quote David Irving, Douglas "is the classic Muenchhausen Syndrome type, seeking to attract attention to himself - using names like 'Freiherr von Mollendorf,' and generally living the life of a suave spy, adventurer, and sophisticate." Irving continues: Fetzer writes: