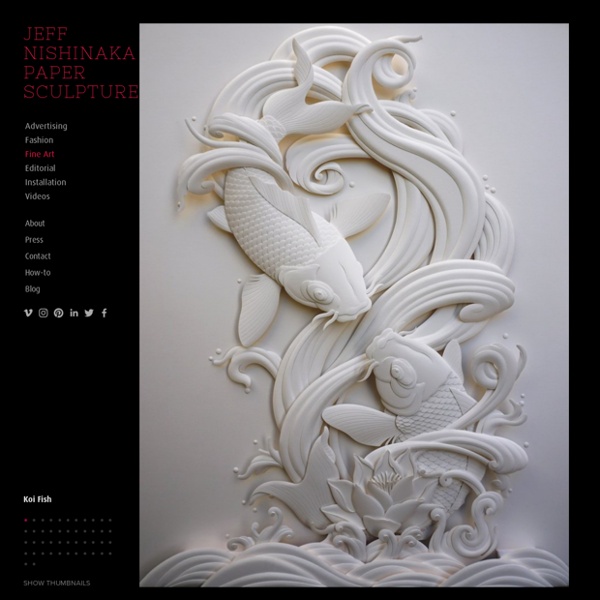 Calvin Nicholls It was only a matter of time before Calvin Nicholls' life-long passion in art and wildlife combined! The Canadian has been a full-time paper sculpture artist since the mid-1980's. With such a variety of animals in his collection, he's essentially created his own paper zoo. Many of the animal paper sculptures belong in Nicholls' most extensive collection, which includes over 75 pieces for Follett Library Resources in McHenry Illinois. The series began in the mid-1990's and continues to this day. Clockwork love paper Clockwork Love builds further on the Bling Bling pendant designed by Tjep. for Chi Ha Paura...? Launched in 2002, it was constructed from several layers of overlapping logos. Clockwork Love is a jewelry collection evenly and consistently combining a great multitude of graphic elements in a ... Read more >

Su Blackwell - Book Sculptor Since the altered book project, I've become really interested in the artform and have been researching different artists and methods of alteration. One of my absolute favorite book sculptors I've come across is Su Blackwell. Jorinde and Jorindel, Book Pages, 2010 Blackwell's work is predominantly in altering books, though she has some interesting works made from old nightgowns and curtains. Her works take a traditionally 2D medium (usually paper) and make it 3D. Sometimes the effect is subtle, such as in her piece, The Extasie, where the two figures are fairly flat, yet by standing up out of the book and by being placed at different sections of the pages, a sense of depth is created. Other times, she creates a true 3D sculpture using the book pages, such as in The Hazel Tree.

Elsa Mora Artwork and Photography © Elsa Mora ↓ Links to other galleries: *Artist’s Books *Mixed Media *Painting *Editorial *Drawing *Jewelry *Photography 3D Laser Cut Paper Art by Eric Standley Apr 23, 2013 Eric Standley is an artist and educator currently living and working in Virginia. In his incredible series of 3D laser cut paper art, Standley’s work is found at the intersection of art, technology, history and mathematics. His vector drawings were initially inspired by the geometry in Gothic and Islamic architectural ornamentation. The pieces are painstakingly assembled from laser-cut paper, layered to create elaborate 3-D works of art. Often these works are created using well over 100 layers of paper and can take months of planning and drawing. Build 3D Paper Letters From A Nifty Font Speaking of Fontstruct, I found something cool over there. Punched Out is a free font that allows you to type letters, print, cut, fold, and glue to make 3D forms. Created by Tobias Sommer, it's available for download at Dafont or Fontstruct.