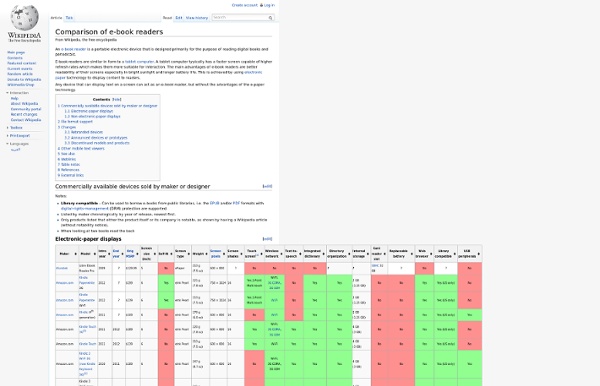 An e-book reader is a portable electronic device that is designed primarily for the purpose of reading e-books and periodicals. E-book readers are similar in form to a tablet computer, and usually refer to readers that use electronic paper, which means better readability of their screens especially in bright sunlight, and longer battery life. When disconnected from the web, an e-book reader's battery will last from weeks to months. A tablet computer typically has a faster screen capable of higher refresh rates which makes them more suitable for interaction. Any device that can display text on a screen can act as an e-book reader, but without the advantages of the e-paper technology. Commercially available devices sold by maker or designer[edit] Notes: Library DRM compatible – Can be used to borrow e-books from public libraries, i.e. the EPUB and/or PDF formats with digital-rights-management (DRM) are supported." Electronic-paper displays[edit] Different kinds of screens[edit] Changes[edit]

Metcalfe's law Two telephones can make only one connection, five can make 10 connections, and twelve can make 66 connections. Metcalfe's law states that the value of a telecommunications network is proportional to the square of the number of connected users of the system (n2). First formulated in this form by George Gilder in 1993,[1] and attributed to Robert Metcalfe in regard to Ethernet, Metcalfe's law was originally presented, circa 1980, not in terms of users, but rather of "compatible communicating devices" (for example, fax machines, telephones, etc.)[2] Only more recently with the launch of the Internet did this law carry over to users and networks as its original intent was to describe Ethernet purchases and connections.[3] The law is also very much related to economics and business management, especially with competitive companies looking to merge with one another. Network effects[edit] Limitations[edit] Business practicalities[edit] Modified models[edit] See also[edit] References[edit]

eBook Reader 2011 | Compare Best eBook Readers - TopTenREVIEWS B. Dalton B. Dalton Bookseller (often called B. Dalton or B. Dalton's) was an American retail bookstore chain founded in 1966 by the Dayton's department store chain. History[edit] Dayton's, a department store chain based in Minneapolis, Minnesota, began the B. B. 1980s and 1990s[edit] A B. By 1986, discounting practices by rival book chains had caused declining profits for B. In January 2012 B.Dalton closed one of the last two locations at Roosevelt Field Mall in Garden City, New York. Format[edit] Initially, B. Software Etc. Software Etc.' In 1986, B. References[edit]

Better, Cheaper French Cuisine Waldenbooks Waldenbooks (often referred to as Waldens), operated by the Walden Book Company, Inc., was an American shopping mall-based bookstore chain and a subsidiary of Borders Group. The chain also ran a video game and software chain under the name Waldensoftware as well as a children's edutainment chain under Walden Kids. In 2011 the chain was liquidated in bankruptcy. History[edit] In 1984, Waldenbooks acquired the Brentano's chain, and later that year was itself acquired by Kmart. After 2004, many Waldenbooks locations were re-branded as "Borders Express" stores. On July 18, 2011, Borders Group filed for liquidation to close all of its remaining Waldenbooks and other stores. References[edit] External links[edit]

How to Edit PDF Files - Free Tools for Manipulating PDF Documents The PDF file format was originally created by Adobe in the early ’90s and it now the most popular format for exchanging all sorts of documents including presentations, CAD Drawings, invoices, government forms and other legal documents. There are several reasons why PDF file format is so popular. PDFs are generally more compact (smaller in size) than the source document and they preserve the original formatting. The content of a PDF file cannot be modified easily and you can prevent other users from printing or copying text from PDF documents. Also, you can open a PDF file on any computer or mobile device natively. While PDF Files are “read only” by default, there are workarounds that will let you modify any PDF document for free without requiring the source files or any of the commercial PDF editing tools like Adobe Acrobat. We are primarily focusing on tools that let you alter the actual contents of a PDF files. An Online PDF Editor for Basic Tasks Change Metadata of PDF Files

Sony Reader The Sony Reader is a line of e-book readers manufactured by Sony, who invented the electronic ink reader with its Librie.[1] It uses an electronic paper display developed by E Ink Corporation, is viewable in direct sunlight, requires no power to maintain a static image, and is usable in portrait or landscape orientation. Sony sells e-books for the Reader from the Sony eBook Library store in the US, UK, Japan, Germany, Austria, Canada and it will be coming to France, Italy and Spain starting in Spring 2012.[2] The Reader also can display Adobe PDFs, ePub format, RSS newsfeeds, JPEGs, and Sony's proprietary BBeB ("BroadBand eBook") format. Some Readers can play MP3 and unencrypted AAC audio files. Compatibility with Adobe digital rights management (DRM) protected PDF and ePub files allows Sony Reader owners to borrow ebooks from lending libraries in many countries.[3] Models and availability[edit] There have been ten models to date. 2013 Model[edit] Reader Wi-Fi PRS-T3[edit] Specifications

What's in a wine label? - Wine These days many enjoy buying wine with labels that feature animals: kangaroos, penguins, fish, lizards, and loons. These “critter labels” don’t just happen by accident — research shows that American wine consumers are 40 percent more likely to buy a wine with a cute animal on the label when compared to a straightforward label that gives the standard information: the name of the producer, the name of the grape, the name of the place where the vineyards are located, and the year in which the grapes were picked. But whether we choose our wines based on the cute factor or on the basic label facts, most wine labels give us minimal information; it’s up to the consumer to know about the vintage, the area where the grapes are grown, etc. Sometimes the back label of a wine is reserved for marketing the wine, and in the process of trying to hook the consumer with spinspiel, we learn a bit more about the origins of the wine and the philosophy of the producer. Let’s take a look. Filtration: None

SPIEGEL ONLINE - Nachrichten Bernard Bilis magie prestidigitation closeup one man show illusions Home | Andy Cohen Magic Moments www.yourcountryyourcall.com Vince Cable | Ministers Vince Cable was appointed Secretary of State for Business, Innovation and Skills in May 2010. He is the Liberal Democrat MP for Twickenham. Education Vince was educated at Nunthorpe Grammar School, York and Fitzwilliam College, Cambridge, where he studied natural science and economics and was President of the Union. Political career He served in the Liberal Democrat Shadow Cabinet as Spokesman on Trade and Industry from 1999 to 2003, and Shadow Chancellor from 2003 to 2010. Career outside politics After graduating, Vince worked as Treasury Finance Officer for the Kenyan Government between 1966 and 1968. Personal life Vince is married and has 3 children by his late wife.