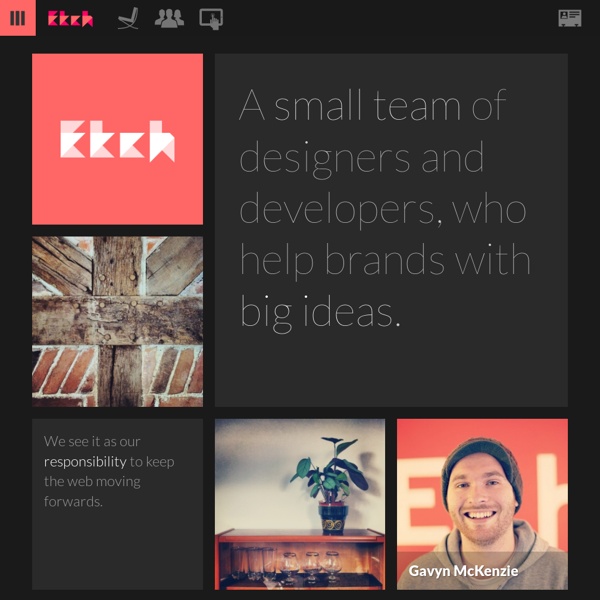 Future Insights Live A conference for thinkers, Explorers, & Pioneers of the web. Red Hot Topics Covering all the hottest topics. Future Insights Live will keep you right up to date with the latest technologies and techniques. Packed Schedule Top Drawer - A smooth dropdown menu for responsive web design Tap the menu icon in the top right. The click event will assign the class of active to the drawer container which alters the translate value to bring it into view. Modernizr will detect whether the user's device is capable of CSS transforms, if it isn't we simply show and hide the menu after the button is pressed - no point in animating if it isn't going to work smoothly. Showcase of Beautiful Responsive WordPress Themes - Designhash In today’s time, more and more people are using their mobile and tablet when browsing the internet. To get more out of this steady increase of mobile and tablet users. You need to go with the flow and it is a necessity to get more audience, means more income and more traffic to your site. In order for you to achieve this, you will need a template that can render in different resolution devices.

The Story Congratulations! Nothing enhances your entertainment experience like a huge flat-panel TV. And while the size was definitely a selling point, it's also a dangerous one. The average 32" flat-panel TV weighs as much as three bowling balls! A heavy fact you learn when you drop it on your toe.

Breaking Ontop members login breaking ontop contact info Apostrophe Copywriters Meet the family. Words work in so many ways - in magazines and brochures, on billboards, in scripts, and even on websites and social media. So it’s a good thing we have writers who specialise in each. Moving Boxes Menu with jQuery She packed her seven versalia, put her initial into the belt and made herself on the way. When she reached the first hills of the Italic Mountains, she had a last view back on the skyline of her hometown Bookmarksgrove, the headline of Alphabet Village and the subline of her own road, the Line Lane. Pityful a rethoric question ran over her cheek, then she continued her way. On her way she met a copy. The copy warned the Little Blind Text, that where it came from it would have been rewritten a thousand times and everything that was left from its origin would be the word "and" and the Little Blind Text should turn around and return to its own, safe country. But nothing the copy said could convince her and so it didn’t take long until a few insidious Copy Writers ambushed her, made her drunk with Longe and Parole and dragged her into their agency, where they abused her for their projects again and again.

Kitchen Remodeling Seattle Sawyer Maker Lab (SML) is a Seattle design build firm with over a decade of experience in all aspects of design, construction and fabrication. Our Work SML is dedicated to preserving the integrity of design through utility and the honesty of the construction through craft. The architecture, furniture, designs, and residential projects seen here are the works of Jason Sawyer [principal] and occasional collaborators. Any project, Any size Content Rotator with jQuery Even the all-powerful Pointing has no control about the blind texts it is an almost unorthographic life One day however a small line of blind text by the name of Lorem Ipsum decided to leave for the far World of Grammar. The Big Oxmox advised her not to do so, because there were thousands of bad Commas, wild Question Marks and devious Semikoli, but the Little Blind Text didn't listen. She packed her seven versalia, put her initial into the belt and made herself on the way. When she reached the first hills of the Italic Mountains, she had a last view back on the skyline of her hometown Bookmarksgrove, the headline of Alphabet Village and the subline of her own road, the Line Lane. Pityful a rethoric question ran over her cheek, then

Sidr - A jQuery plugin for creating side menus You will be able to create multiple sidrs on both sides of your web to make responsives menus (or not, it works perfectly on desktop too). It uses CSS3 transitions (and fallbacks to $.animate with older browsers) and it supports multiple source types. Get started Like any other plugin, you must include it after the jQuery script. For a better performance load them at the bottom of your page or in an asynchronous way.

The Story of Our Company - The Making of Teehan+Lax Growth 2004–2009 We moved to a larger office in 2005. We took a five year lease, which now eclipsed the printer as our biggest commitment. The office was 4000 sq ft. We spent $50,000 to build out the office, which now included a boardroom (something we previously didn’t have) and a kitchen. During the 5 year period between 2004-2009, the company went from about 9 people to over 30.