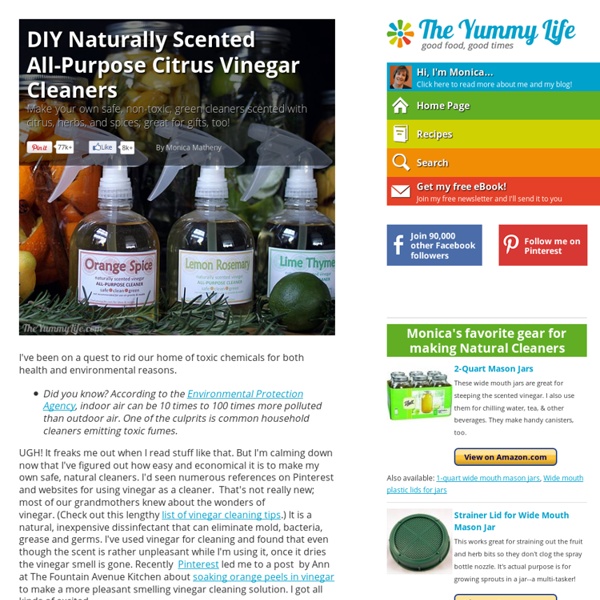 I've been on a quest to rid our home of toxic chemicals for both health and environmental reasons. Did you know? According to the Environmental Protection Agency, indoor air can be 10 times to 100 times more polluted than outdoor air. One of the culprits is common household cleaners emitting toxic fumes. UGH! It freaks me out when I read stuff like that. After my recent post about using fruit, herbs, and spices for making natural home fragrances, it occurred to me that I could use some of those same scent combinations for making natural cleaners with vinegar. These scented cleaners don't completely eliminate the vinegar scent when first sprayed. THESE MAKE COOL, INEXPENSIVE GIFTS. HOW TO MAKE NATURAL CLEANERSwith vinegar, citrus, herbs, and spices Assemble these ingredients: view on Amazon: essential oils, bulk pricing on cinnamon sticks, whole cloves Assemble these supplies: Jars or other sealable containers. Peeling the citrus (only use the peel & pith, not the juice & pulp inside): Wood.

Homemade Vanilla Extract I love the scent of vanilla in anything from candles to soap and the flavor of vanilla in baked goods and desserts is second to none. If a recipe calls for one teaspoon vanilla extract, I use at least two; but likely more and use a slow, heavy hand when pouring. All that pouring makes my food taste amazing but my wallet doesn’t like it. Storebought real vanilla extract is pricey and I can make extremely fast work of a two- or four-ounce bottle that sells for $8.99 to $10.99, and up. Two ounces, that’s for one batch of cookies, right? Homemade vanilla extract saves money and even if it didn’t, when it comes to taste and flavor, there is just no comparison.

Rock Rocket Stove Is Held Together By Coat Hangers © Liz To Rocket stoves burn hot and clean, using very little wood or other combustibles. Vancouver industrial designer Liz To has designed a new version for Tibet, where they use dung as fuel. Liz notes that 1.6 million people die from indoor pollution from traditional "Three Stones" type fires every year. Meanwhile, in the west, 3.5 billion wire hangers end up in U.S. landfill every year.

How to Make Homemade Peppermint Extract Part of the reason that I decided to grow mint this year was so that I could try making my own peppermint extract. Jesse and I are pretty much obsessed with mint (especially mint plus chocolate) so we go through a lot of mint extract. Even though I buy my extracts through Azure Standard, they’re not exactly cheap, so making my own seemed like a great way to save some money. I finally got down to it last weekend.

Open Source Permaculture – help to build the most comprehensive free resource for Permaculture education Talk, Uncategorized — By Irena Efremovska on 04/09/2012 17:37 Sophia Novack, the force behind Permaculture Media Blog and Permaculture Directory ‘What does your backyard look like right now?’ 12 Unusual Ways to Use Sugar (Without Eating It!) Just because sugar isn’t a recommended part of your diet doesn’t mean it is entirely useless. Sugar has plenty of uses outside of the kitchen. From reducing pain to fueling a car, sugar is a cheap and effective alternative to many cleaning and toiletry items. So, while it may be sweet in taste, the grainy powder is an effective household and beauty remedy that gets the job done without derailing your diet. 1.

* Maria's Self *: DIY Toilet Bombs - Deodorize & Kill Bacteria! Just Drop One in the Bowl;-))) Remember I told you in my previous post that the next product in my store will be an "outside the box" one? Well, you've been warned;-))) I came up with the idea of Toilet Bombs a few months ago. At first I thought it would be embarrassing to make a post about them but I fell so much in love with these toilet bombs that I just HAD to share the idea with you - I'm seriously addicted! When I drop them in the toilet bowl they start fizzing (= exploding;-) and not only do they smell amazing they also deodorize, kill the bacteria (including the odor-causing ones!) and keep the bowl clean. And on top of that, these bombs became a part of my bathroom decor - don't they just look adorable?

Why Trees Matter TREES are on the front lines of our changing climate. And when the oldest trees in the world suddenly start dying, it’s time to pay attention. North America’s ancient alpine bristlecone forests are falling victim to a voracious beetle and an Asian fungus. In Texas, a prolonged drought killed more than five million urban shade trees last year and an additional half-billion trees in parks and forests. In the Amazon, two severe droughts have killed billions more. 28 Amazing Benefits and Uses for Hydrogen Peroxide By Andrea Harper Guest Writer for Wake Up World Hydrogen peroxide (H2O2) is the only germicidal agent composed only of water and oxygen.

Keyhole Gardens Unlock Healthy Diets They are such simple things—variations on the type of small vegetable plots many of us have in our own backyards—yet keyhole gardens are having a profound effect on the lives of people in Lesotho, a small nation that's an "island" in the middle of South Africa. Thanks to keyhole gardening, introduced by CRS, Maabisi Phooko of Lesotho is able to grow vegetables year-round. Photo by Kim Pozniak/CRS

26 Tips and Tricks To Simplify Life I have been collecting all kinds of clever tips to make life just a little bit more simple. Here are some of my favs! 1. Cord organization tips. I am SO doing this.