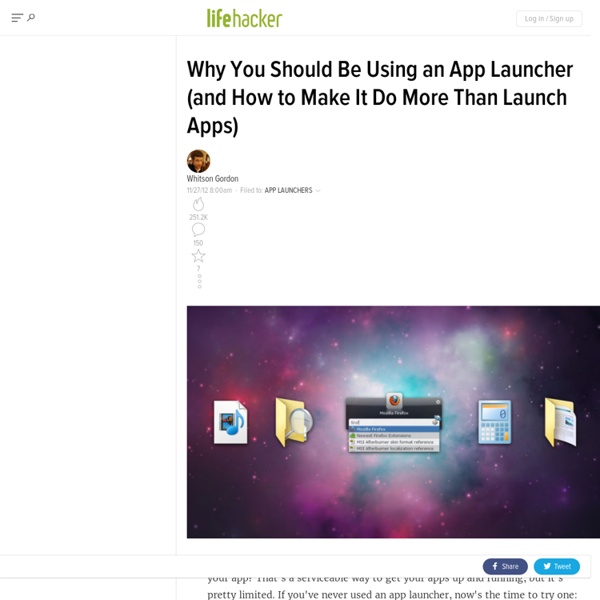 Ditch Hard Drive Clutter with an Organized, Automated Home Folder Just wanted to share another tool that can replace and improve upon Belvedere (since it hasn't been updated in 2 years). The program is called DropIT. Here is the description from their website: When you need to organize files, DropIt can eliminate much of the drudgery of searching and manually opening folders and moving files around. Drop a group of different files and folders on the floating DropIt image and it sorts them to defined destination folders, compresses or extracts them, opens them with associated programs or performs other defined actions. You can define how to filter your files (by name, directory, size, date, properties, content, regular expressions) and associate one of the 18 available actions to perform (Move, Copy, Compress, Extract, Rename, Delete, Encrypt, Decrypt, Open With, Upload, Send by Mail, Create Gallery, Create List, Create Playlist, Create Shortcut, Copy to Clipboard, Change Properties and Ignore).

Top 10 Uses for Linux (Even If Your Main PC Runs Windows) The Best Firefox Addons Advertisement Firefox is famous for its addons, and for good reason: they can make your browser do just about anything. But which addons are the most useful? Here are the addons we think are best, what they do, and where you can find them. Enjoy! Bookmarks If you’re using the web for research, you need to save what you find fast. Xmarks If you use more than one browser, you need this. Pearltrees Compile things you find interesting, arrange them visually and share the results with the world. SiteLauncher SiteLauncher offers a quick and easy way to access your favorite sites. Multirow Bookmarks Toolbar Plus If you like having your most visited sites on a toolbar, but often run out of room, check out Multirow Bookmarks Toolbar Plus. Clipping Many times you need to note a few sites for future reference. Evernote Web Clipper If you don’t use Evernote, you’re missing out: it’s the perfect place to put all those things you need to remember for later but don’t need right now. Zotero Scrapbook Stratiform

10 of the Most Popular Linux Distributions Compared Linux isn’t a complete operating system — it’s just a kernel. Linux distributions take the Linux kernel and combine it with other free software to create complete packages. There are many different Linux distributions out there. If you want to “install Linux,” you’ll need to choose a distribution. Ubuntu Ubuntu is probably the most well-known Linux distribution. The Ubuntu project has a focus on providing a solid desktop (and server) experience, and it isn’t afraid to build its own custom technology to do it. Ubuntu is modern without being too bleeding edge. Linux Mint Mint is a Linux distribution built on top of Ubuntu. This distribution now has its own identity. Debian Debian is an operating system composed only of free, open-source software. Ubuntu was originally founded to take the core bits of stable Debian and improve on them more quickly, packaging the software together into a user-friendly system that’s more frequently updated. Fedora CentOS / Red Hat Enterprise Linux Arch Linux

How to hack any Linux machine just using backspace If you press the backspace key 28 times on a locked-down Linux machine you want to access, a Grub2 bootloader flaw will allow you to break through password protection and wreck havoc in the system. Researchers Hector Marco and Ismael Ripoll from the Cybersecurity Group at Universitat Politècnica de València recently discovered the vulnerability within GRUB, the bootloader used by most Linux distros. As reported by PC World, the bootloader is used to initialize a Linux system at start and uses a password management system to protect boot entries -- which not only prevents tampering but also can be used to disable peripheries such as CD-ROMs and USB ports. Without GRUB password protection, an attacker could also boot a system from a live USB key, switching the operating system in order to access files stored on the machine's hard drives. The researchers discovered the flaw within GRUB2, of which versions 1.98 to 2.02 are affected. Read on: Top picks

10 Top Most Popular Linux Distributions of 2015 As the end of 2015 approaches, it is not only a time to start drafting your new year’s resolutions but also to check out what were the most popular Linux distributions in 2015. A brief comparison with 2014 will also help us whether those distros are actually experiencing sustained growth or not. Ready to start? Let’s begin. To find out what are the most widely used distros of this year, let’s head to Distrowatch and check the Page Hit Ranking (PHR for short) table. To begin, let’s take a look at the following comparative table, which lists the position of the top 10 Linux distributions from this year and from 2014: As you can see, there hasn’t been much or remarkable changes during this year. 10. Advertised by its developers as “a fast and open replacement for Windows and OS X”, this nice-looking Ubuntu LTS-based desktop Linux distribution was first made available in 2011 and is currently on its third stable release (codename “Freya“). Website: 9. 8. 7. 6. 5. 3. 2.

Five Stunning Ubuntu Alternatives That You've Never Heard Of You’re using Ubuntu, but you want your desktop experience to be a little more… eye catching. While you could always add a new desktop background, or switch desktops completely, you also have the option of switching to a completely different distro. We’ve compiled this list of five utterly stunning Ubuntu alternatives for you to watch demos of, and perhaps download and install on your Linux computer. Why Not Just Use Ubuntu? Quite simply, there is more to Linux than Ubuntu. In reality, hundreds of Linux distros are in daily use; DistroWatch.com features a top 100 list of the current most-downloaded distros, where Mint, Debian, Ubuntu, openSUSE, and Fedora hold the top 5 spots. Now, if you’re new to Linux, Ubuntu is a very good place to start off. Of course, you could choose any old distro, but why not do a little bit of research and find one with a stunning GUI to impress your family and friends, and show them that Linux isn’t all about command lines and Unity? Elementary OS Freya 0.3 Pear OS

​Ubuntu Linux continues to rule the cloud Let's have a pop quiz. The most popular desktop operating system is... Windows. Right. The most popular mobile operating system is... Android! And, the most popular operating system on the public cloud is... Yes, that's right. To put this into perspective, by RightScale's latest State of the Cloud report, Amazon Web Services (AWS) dominates the public cloud, with 57 percent of market. In addition, to AWS, Ubuntu has been available on HP Cloud, and Microsoft Azure since 2013. Canonical, Ubuntu's parent company, is also putting considerable efforts behind OpenStack for the private and hybrid cloud. So, perhaps it should come as no surprise that in the latest OpenStack user survey, Ubuntu dominated OpenStack clouds almost as much as it does the public cloud. The fact that Linux so utterly dominates the cloud is no surprise. People still see Ubuntu as primarily a desktop operating system. Related Stories: