Signe Whitson: Rude vs. Mean vs. Bullying: Defining the Differences 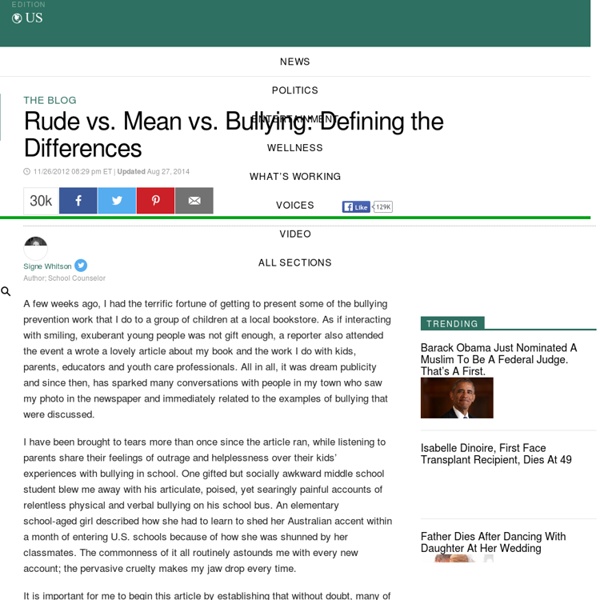 A few weeks ago, I had the terrific fortune of getting to present some of the bullying prevention work that I do to a group of children at a local bookstore. As if interacting with smiling, exuberant young people was not gift enough, a reporter also attended the event a wrote a lovely article about my book and the work I do with kids, parents, educators and youth care professionals. All in all, it was dream publicity and since then, has sparked many conversations with people in my town who saw my photo in the newspaper and immediately related to the examples of bullying that were discussed. I have been brought to tears more than once since the article ran, while listening to parents share their feelings of outrage and helplessness over their kids’ experiences with bullying in school. One gifted but socially awkward middle school student blew me away with his articulate, poised, yet searingly painful accounts of relentless physical and verbal bullying on his school bus. Explore HuffPost

Michael Brown’s Autopsy Report Corroborates Eye Witness Testimony An independent autopsy of police brutality victim Mike Brown seemed to confirm eyewitness testimony that he was executed while attempting to surrender to officer Darren Wilson. The family hired Dr. Michael M. Baden, a well respected forensic pathologist, to do a second examination of their son, because they did not want to depend on the police and government agencies to investigate themselves. Educational Leadership:Early Intervention at Every Age:The Perils and Promise... Carol S. Dweck I think educators commonly hold two beliefs that do just that. Many believe that (1) praising students' intelligence builds their confidence and motivation to learn, and (2) students' inherent intelligence is the major cause of their achievement in school. Our research has shown that the first belief is false and that the second can be harmful—even for the most competent students. As a psychologist, I have studied student motivation for more than 35 years.

"The End of Bullying Begins With Me": Bullying Prevention Books for Young Mighty Girls By Katherine Handcock, A Mighty Girl Senior Research Intern “The End of Bullying Begins With Me” is the National Bullying Prevention Month slogan for 2013, and at A Mighty Girl we believe that’s absolutely true! By teaching our children about bullying — what it is, the effects it has on everyone, and the ways that we can stop it — we can work to ensure that bullying becomes a smaller and smaller part of all our lives. With that in mind, we’ve put together a series of three blogs featuring great Mighty Girl anti-bullying resources for all ages. In this first part of the series, we’ll showcase books for preschool and early school-aged children that address bullying from a variety of angles, while in the two remaining blogs, we’ll talk about resources for tweens and teens and resources for parents and educators.

The Thinker Builder: Turning Around a Turn and Talk A turn-and-talk is a structure to get students talking to a partner for a few moments. I use turn-and-talks a lot during whole group instruction, especially reading, because it allows for more communicating than me just calling on particular students. Often though, I feel like my students' turn-and- talks are more like: turn-and-make-noise. Here’s Why Public Wifi is a Public Health Hazard — Matter Session 1: Let everyone connect to our fake network The waitress serves us our coffee and hands us the WiFi password. After Slotboom is connected, he is able to provide all the visitors with an internet connection and to redirect all internet traffic through his little device. Most smartphones, laptops, and tablets automatically search and connect to WiFi networks. They usually prefer a network with a previously established connection.

6 Opening and Closing Routines for New Teachers Routines and consistency matter greatly and are necessary for creating a smooth learning environment in your classroom. Routines help with creating community, checking for understanding, and managing the classroom. I'm going to share three opening routines and three closing routines that you can start using in your next class. Opening Routines Inside the conservative brain: What explains their wiring? The question of human nature reliably polarized political philosophers across many centuries and several oceans. One group of these thinkers viewed people as innately cooperative or potentially compassionate; another group argued for an inherently competitive human nature. This division begs the question of whether the split corresponds to a difference in left-right political orientation. In some cases, such as that of Marx, there is little doubt about where to place the thinker on the political spectrum. In other cases, however, identifying the ideological leanings of historical figures is a task better left for professional historians. In any case, history’s great political philosophers are not the only people who disagree over the nature of human nature; the human-nature question is a perennial problem that also divides contemporary politicians and ordinary citizens.

Kate Winslet and the little Australian anti-bullying film that took on the world When one of Australian writer-director Galvin Scott Davis’ little boys was bullied he wanted to comfort him by reading him a book about overcoming bullies. But when he searched the well-stocked bookshelf in his bedroom, he couldn’t find one. So he turned to his own imagination and made up a story. “My middle boy was acting quiet and I found out that he’d been bullied.